The summer fog has rolled into San Francisco, and we’d been watching the forest hopefully while Life delayed our visit.

We finally made it on the kind of evening that makes you fall in love with Sutro Cloud Forest all over again. A few others apparently agreed; we encountered two riders on their bikes, and two joggers.

The understory was green and fresh with all the moisture, and the paths on the South Ridge damp. These trails haven’t been over-widened for some time, and are interesting and full of character. 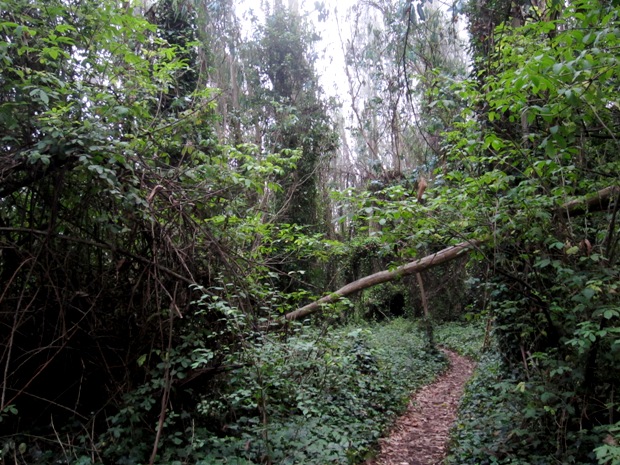 Like this one that ducks under a tree that fell, but like most of Sutro Forest’s falling trees, never made it to the ground. Other trees catch them instead. 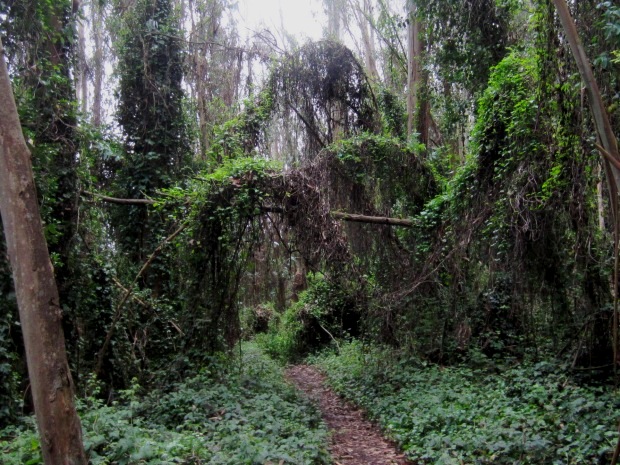 This is a particularly neat bit of the trail – vines have grown over thin branches and formed a triple archway.

The poison oak – some of which climbs the tree-trunks as vines – is turning red. There are Poison Oak warnings at every entrance to the forest.

The fog was blowing in even as we climbed the trails, and by the time we reached the Native Plant garden with its crop of little orange flags in the restoration meadow, it was quite hazy. 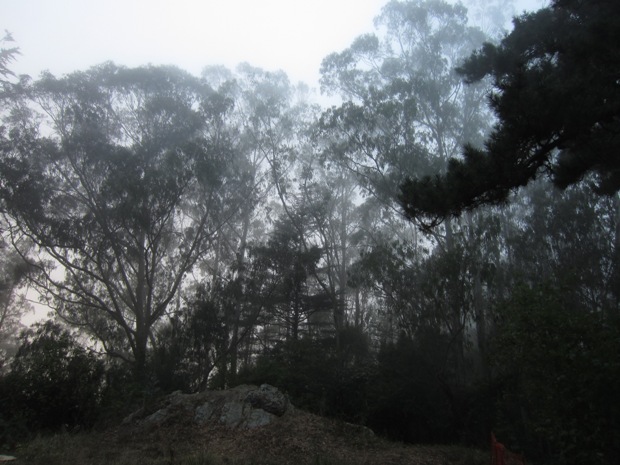 The trees appeared in soft shades of gray. 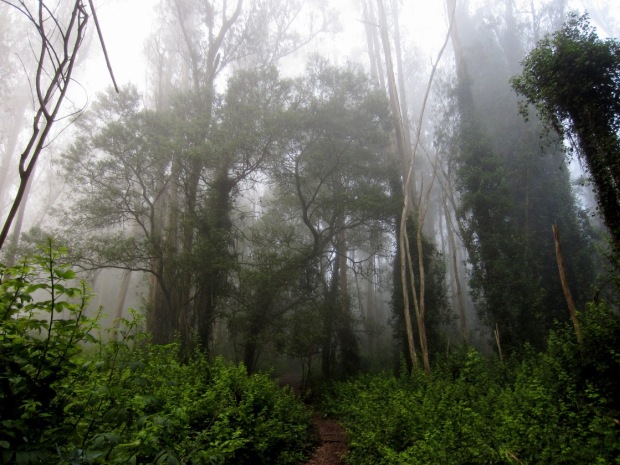 In most places, the trail conditions are good – damp enough to give a good footing. In some areas, the trails are still dry, but not so much as to be slippery with dust.

Someone had left a button on a log on the trail: It said Imagination. Was it left deliberately? It felt quite appropriate. 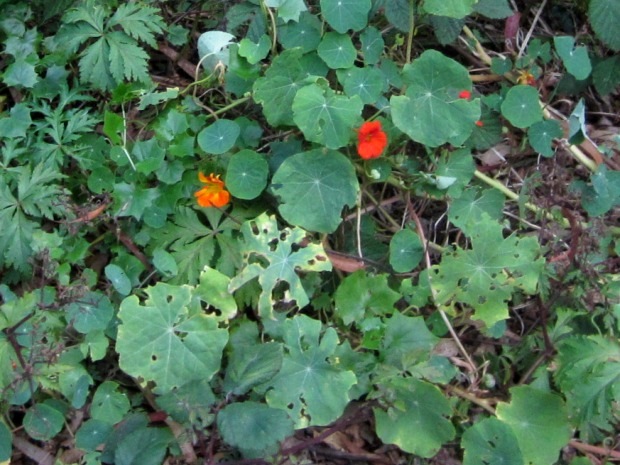 Along the road to the water tank, nasturtiums were blooming, their orange flowers much brighter than the orange plastic flags in the Native Garden. This one was clearly part of the food chain – something had been munching on its leaves. 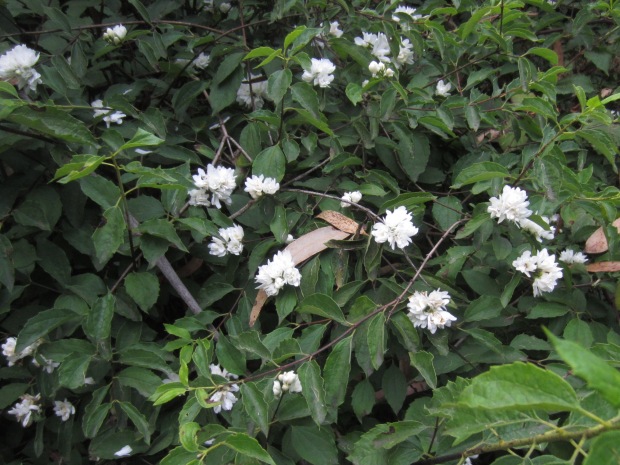 A mock orange (?) bloomed enthusiastically with its jasmine-like flowers.

The camera battery gave out 100 pictures into the hike. This was unfortunate, because for the first time, we saw two raccoons on the trail. The first politely moved off the trail as soon as it saw us; the second froze, as though it couldn’t believe its eyes. Had the camera been functional, it would have posed. Instead, we waved and yelled at it to make way; it disappeared into the understory.

THE SOUTH RIDGE AND DEMONSTRATION PLOT #1

Most of area in these pictures will be directly affected by the earliest part of the UCSF Management Plan.

We are grateful that project implementation has been delayed for a year, and will not start until August 2014.

San Francisco’s marine layer that turns Sutro Forest into a de facto Cloud Forest makes this one of the dampest places in the city outside the actual bay. Meanwhile, it’s fire season elsewhere. A grass-fire burned 50 acres in San Jose. (Click HERE for details.)

Could this happen here? The forest is not a fire hazard now, but it could be made into one, by thinning the trees to dry it out and make it more windy.

Grass fires ignite relatively easily, and move fast. And they have been known to occur in San Francisco. The picture below is from a grass fire on Bernal Hill in May 2013, which slightly damaged two homes. According to our sources, the same area had a fire two years ago.

In August 2009, firefighters battled a “grass and brush” fire in Glen Canyon Park.

And there had been another, smaller, fire in Glen Canyon earlier the same year, in May.

We’re glad that the Native Plant Garden on Mount Sutro is supplied with an irrigation system. We hope that UCSF ensures that it is functional and is ready to turn it on should a fire start in the dry grass of the meadow sections there.