UCSF and Herbicide Use 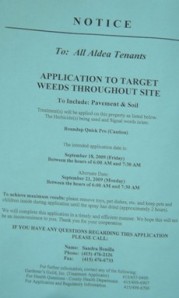 For years, UCSF seemed entirely willing to use Roundup even in its student housing areas, where children and pregnant women might be exposed to it. (Here’s a link to correspondence by a Sutro neighbor , trying to get UCSF to stop using Roundup in the Aldea campus.) We found notices suggesting that it was spraying the area quite frequently, several times annually.

However, in mid-November 09, UCSF informed us that it was stopping use of herbicides pending further investigation.

Even more importantly, it confirmed that no pesticides had been used in the forest since 2008.

“Herbicides have not been used in the Mount Sutro Open Space Reserve since 2008, and are not being used at Aldea pending an evaluation of a herbicide commonly known as “Roundup”. UCSF is evaluating Roundup as a result of recent studies on the active ingredient in Roundup and similar glyphosate-based herbicides…”

In November 2013, UCSF announced it would not use herbicides in the Open Space Reserve.