Sutro Forest is over 120 years old.

It was planted by Adolph Sutro (1830-1898), and like the larger and better-known Muir Woods, it’s the last remnant of a forest that covered a much larger area. What he intended is just what Sutro Forest is now:

“…people… will wander through the majestic groves rising from the trees we are now planting, reverencing the memory of those whose foresight clothed the earth with emerald robes and made nature beautiful to look upon.” 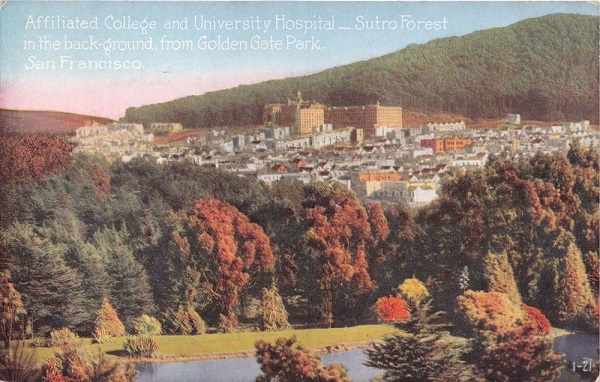 Here’s an item from the newspaper The San Francisco Call, written on 11th Oct 1901:

A FOREST— G. H. I., City. The forest that is on the hillside east, south and west of the Affiliated Colleges covers 194 acres. It is part of the San Miguel Ranch that was purchased by the late Adolph Sutro after making his millions by means of the Sutro tunnel on the Comstock. He named the place Mount Parnassus, after the mountain of that name in Phocis, greatly celebrated among the ancients and regarded by the Greeks as the central point of their country. Mr. Sutro was a great believer in the idea that for every tree that is destroyed two should be planted, and to show that trees will grow on barren hills he at the time he inaugurated tree planting in this city and on Goat Island a quarter of a century ago set out thousands of trees on Mount Parnassus, with the result that is noticeable to-day.

(The Affiliated Colleges are what is now UCSF; and Goat Island is now called Yerba Buena.) After his death, parts of it were sold or donated. For a time, parts were logged for timber in an unsuccessful venture started after his death.

The beautiful forest that remains still covers Mount Sutro. It is dense and tall and damp with the fog that frequently blankets this part of San Francisco. Wreathed in mist, it is a thing of ethereal beauty and a true treasure of an urban forest.

The neighborhood of Forest Knolls was built around 1960 on part of that land. As late as 1990, the neighborhood was thickly surrounded by trees, really giving the feeling of a forest glen. The Midtown Terrace homes across Clarendon weren’t visible; neither was the Aldea campus. The historic forest was – and remains – an essential element in the neighborhood’s character.

Here’s a link to pictures at the SF Public Library.

The text below picture #10 (which is eerily like the picture on the front page of this site, but without the houses) says:

Newscopy: “This is the story of Sutro forest – and how the city has laid it waste. It is a story of trees versus concrete. Of green glades gobbled up for houses, eave-to-eave, row on row. Maybe it is the story of our way of life, inevitable in the push of population. But in many ways it is a tragedy. For Sutro Forest was once an 1100-acre spread of foliage within the vast Adolph Sutro-owned San Miguel ranch, and its trees were man-grown, hand-planted in a painstaking effort to provide beauty for San Francisco. But the march of the city is trampling the forest down, plucking it out by roots. Sutro was near as our sandy hills came to having ‘the forest primeval.’ But it’s now ‘the vanishing pine and hemlocks…’ Only a few people care. Some Twin Peaks home-owners have protested. Only one city agency – the Planning Commission – has sought to preserve at least leafy fragments, snatching an acre here, two acres there almost from the bulldozers. Now it is trying to salvage one parcel of 12.5 acres…”.

And now, without even the excuse of necessary housing, this forest that was saved with so much effort, is to be destroyed.

Medical Center Way, the road that runs through the forest from the Aldea student housing to the hospital at Parnassus, is (or was) a truly magical experience to drive along. It feels like a mountain road, the air cool and fragrant with eucalyptus, the light through the trees green and soft.

Incidentally, he was not kidding about “our sandy hills.” There’s evidence (including pictures) that living in old San Francisco was all sand and wind.

5 Responses to A Historic Forest