We’ve often praised UCSF here for keeping Mount Sutro forest pesticide free. No pesticides have been used there since 2008. We’ve said things like “This may be the last pesticide-free wild land in the city. (Thanks, UCSF!)”

On the other hand, we have been following SF Recreation and Parks Department’s Natural Areas Program (NAP) with dismay. Its pesticide use has been growing. As of end-2012, it had its highest usage yet. (The graph shows pesticide usage based on Active Ingredient, one of four measures used in calculating pesticide use.)

That’s all about to change for the worse. Much worse.

Though UCSF says it plans to be very careful in its usage of pesticide, our expectation that this project would require gallons of pesticides is reflected in the Draft Environmental Impact Report (DEIR). That’s provided information we could analyze against NAP data.

It’s quite appalling. On the 48 acres it may treat with Aquamaster (glyphosate, the same active ingredient as Roundup) and Garlon 4 Ultra (triclopyr), it’s contemplating levels of use between 5 and 15 times what NAP uses in an entire year in all its 1100 acres of parks. The graph below compares the DEIR projection to NAP’s 2012 levels (the yellow band). 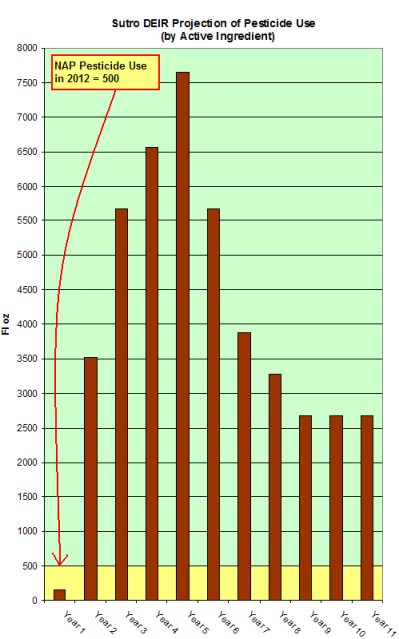 This was going to be a way to make the forest healthier and safer?

Have the Sutro Stewards seen these projections? Just the Demonstration Projects would use as much pesticide as all the Natural Areas put together. The Stewards and their volunteers are the ones who will actually be working these areas.

10 Responses to Bucketloads of Herbicides Coming to Sutro Forest