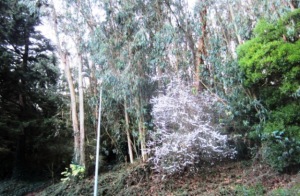 We were up in Mt Sutro Forest a couple of days ago, the day after Valentine’s Day.

The forest looked appropriately romantic. A number of cherry trees were in bloom with tiny white flowers,  like this one near the entry to the South Ridge Trail on Christopher. 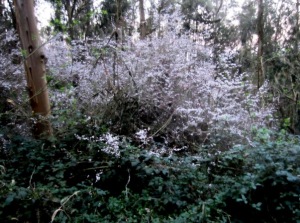 So were the pink-flowering currants in the Native Garden at the summit. 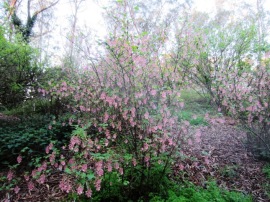 We climbed up the adventurous path to the South Ridge. Just at the top, on the path that bore left, vines formed a gracious green natural archway over the trail. 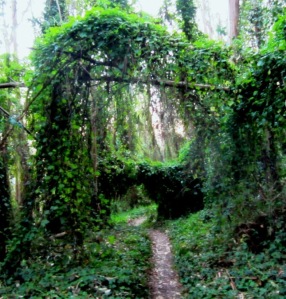 All the trails in general were a bit muddy, the kind of equal-opportunity mud that occurs after rain.

(The cloud forest mud of summer is different – the paths are wet where the forest canopy is closed, and dry and dusty where it’s opened up. That happens in summer, when the fog comes in.)

If you’re walking in this forest, summer or winter, it’s always good to come prepared for muddy trails. It’s worth it.

A lot of the blackberry has been cut back or removed, and in many places, ivy covered the ground instead. The ubiquitous bird-sound of 2009 and 2010 is a fond memory, replaced by a few calls here and there, and overhead, the call of the crows and ravens. Less habitat, fewer birds. 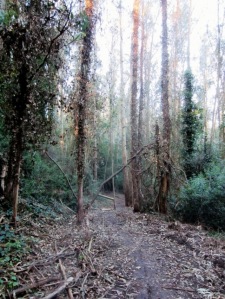 The new non-EIR trail may also be part of the reason. As we noted when we first posted about it, this trail is rather surprising. First, the trails were part of the project as described by UCSF in all the public meetings. So we would have expected that work would start only after approval of the Environmental Impact Report. Second, it goes through the area that was supposed to be untouched as a demonstration of what the forest would look like without intervention (and, hopefully, sound like – since the habitat would have been preserved). This trail, we were told, would not be built until a year after the “demonstration.” Finally, though UCSF generally informed us of other changes to the forest, including tree removals – there was no word of this. We happened upon the trail.

We do not object to trails — within reason. We actually like them. However, too many trails have several negative impacts. They’re like roads. We all need them, but if there are too many, they take away from the ambiance and the habitat. A trail is valuable if it provides access that didn’t exist before. We’re not sure why this one was necessary: It connects two points that were already well connected, merely providing a short-cut.

Many of the trails are too wide. Before, the forest was criss-crossed by narrow trails that provided a sense of adventure and mystery, and the tall bushes and low-hanging branches on each side harbored a lot of bird-life. Now, a lot of that is gone.

We’re glad we got to see the forest as it was before. It’s beautiful now, but the spectacular mysterious isolation that made a visit here like stepping into a different world – not nearly as much.

CHAIN LINK, CONCRETE, AND THE FOREST 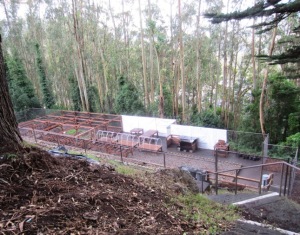 Back in 2000, UCSF published clear plans for an old building on the Aldea campus: it would be torn down, and the area would be replanted to merge with the forest. Instead, quite suddenly in May 2010, neighbors were informed that the foundation of the vanished building would be surrounded by a chain-link fence and converted to a native plant nursery. Of course the neighbors were upset, and at a particularly contentious meeting, In June 2010, Vice-Chancellor Barbara French announced she was hitting the “Pause” button. (The whole story is here.)

Well, it’s definitely been Unpaused now. Without any notification to the neighbors, the nursery has been constructed. The Sutro Stewards plan to activate it shortly. UCSF permitted them to continue with their plans without any further discussion, even despite the objections. We received a distraught email from a neighbor who thought she was on the email list for UCSF but had received no information. We hadn’t, either. 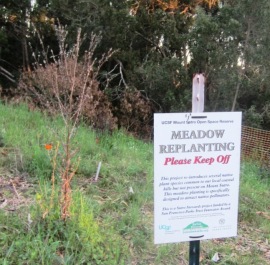 The Native plant garden on the summit of the mountain has greened out. We’re not sure if the grass is native or non-native, but it’s green. There are flowers: pink-flowering currant, and even a few California poppies in the meadow area newly replanted (at a cost of $6,000 granted by the Parks Trust). 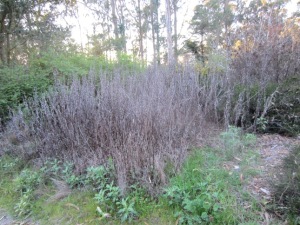 Of course, not all of it was pretty. This winter’s rains haven’t been enough to bring some of the plants around. Those looked like this.

We continued our walk down toward Medical Center Way. On the way, we passed the little cave that started out, two years ago, as Ishi’s shrine. Most recently, it had a wooden elephant and a bright peace sign. The elephant is gone now, replaced by an eclectic collection of symbols – Buddha, Shiva, a Xian warrior replica, a African akua-maa, and several other Polynesian/ native American/ undefined figures. And a mysterious box that we didn’t open. The peace sign is still there. 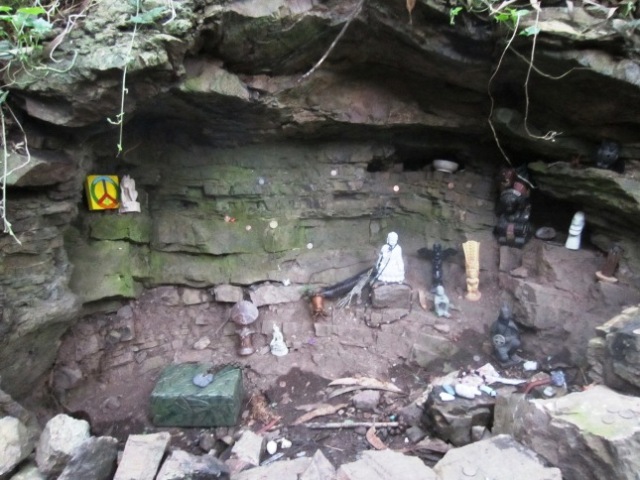 4 Responses to Sutro Forest in February 2012