There’s a story that Ishi, the last of the Yahi tribe of Yana native Americans used to wander Mount Sutro Forest in the early part of the century.

His tribe was massacred, and having nowhere to go, he wandered into the world of the white stranger. Taken into protective custody, he was studied by UC researchers, and lived at UCSF’s campus (which then  housed UC Berkeley’s Museum of Anthropology).

The story that he frequented the forest is unverified, and perhaps unverifiable, but along one of the trails in the forest, there’s a low, shallow “cave” – hardly more then a depression in the rock. Here, someone has fashioned a little shrine to Ishi. It’s been there a while, but the original picture had faded, and was removed. 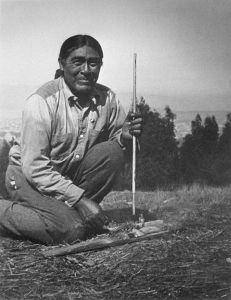 Today, someone had renewed the shrine with a fresh picture, and put a quarter as an offering, a Connecticut quarter with a tree on it. “How appropriate,” said my companion, carefully placing a eucalyptus leaf in the shrine, “I always offer something when I come this way. A fragrant leaf, or something.”

[ETA on 29 Sept 2010:  We passed by that way today; the shrine was gone, though someone had still left a green leaf on the rock shelf where the picture of Ishi was before. Wonder what happened. Did the Mount Sutro Stewards decide against it? Did a random passer-by steal the picture? We don’t know.]