We attended UCSF’s Long Range Development Plan meeting this evening. It’s due 2014, and gives UCSF a road-map through 2035. Most of the discussion focused on how UCSF should get back under their space ceiling, a limit they had decided on back in 1976 but have always exceeded since then. This impacts neighbors, particularly those in the Inner Sunset at 5th and Kirkham.

NOVEMBER FOR THE DRAFT EIR ON FELLING IN THE FOREST

However, there was some information about Sutro Forest. Most importantly, the Draft Environmental Impact Report for the plan to fell thousands of trees on Mount Sutro is likely to come out in a month or two, probably mid-November 2012. We will then have 30 days to respond.

In the presentation, they noted that the “Vegetation Management Plan” was likely to proceed after the EIR was done.

In the LRDP, they are committing to keeping the 61 acres of Mt Sutro as an open space reserve. That doesn’t mean committing to saving the trees, but presumably they will not build anything on it.

In the forest, three small buildings may be demolished to help free up space ceiling limits: The office buildings at the Woods Parking lot, the Surge Parking Lot, and the elbow of Medical Center Way. (They’re the ones in red circle in this map.) The plan would be to return them to Open Space. In our break-out group,  we questioned what that might mean, and pointed out that UCSF had undertaken to return an area under a demolished dormitory to Open Space by planting it to blend in with the forest.  Instead, UCSF converted it into a chain-link-fenced Native Plant Nursery. (That story is HERE.) This raises questions both about the definition of Open Space, as well as accountability should UCSF just change its mind. 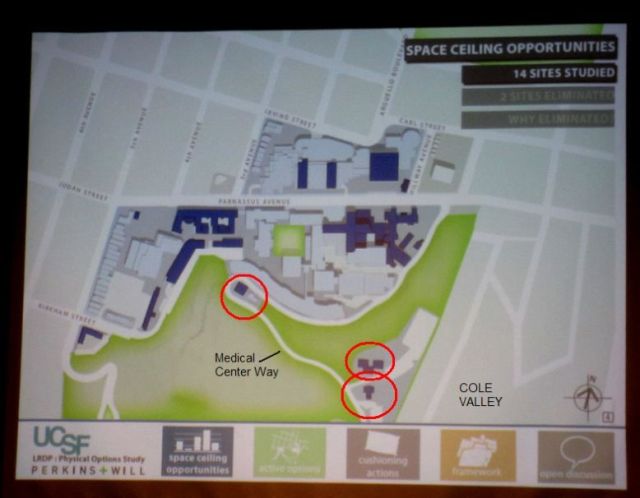 A trail is planned to join the campus with Medical Center Way. (This trail was discussed in the context of the EIR scoping meetings.) While we have no problem with the trail as such, we are concerned about how many trees it would kill.  Our experience with the Kill-Trees trail built in the Interior Greenbelt part of the forest was that it cost us over 50 trees, a number not disclosed in any of the prior meetings. [Edited to Add: That story is HERE.  We should clarify that the Interior Greenbelt is owned by the City, not by UCSF; but our concerns remain.]

Kevin Beauchamp said that the trail would be designed to impact as few trees as possible, and there would be notification and public process in advance. We hope so; when the new trail from the Aldea campus to South Ridge was put in, there was no notification at all. (That story is HERE.)