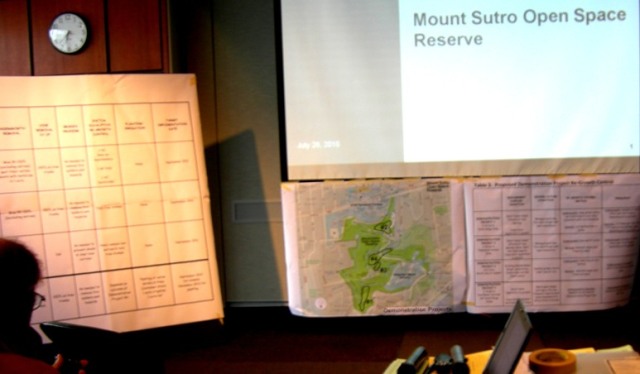 UCSF’s Forest meeting this evening had a reasonably good turnout with a few new faces among the familiar ones. Janet Kessler, the Jane Goodall of San Francisco’s coyotes, was present but preferred not to speak in public. We suggested she write to UCSF with her concerns. This is, incidentally, open to everyone whether they attended the meeting or not.

At the June meeting, people interrupted the lengthy presentations to say inadequate time was available for discussion. Some also felt that UCSF stage-managed the process and accepted “community” input only from the Mount Sutro Stewards and their supporters, and that all the decisions had actually been made.

At this meeting, structured to allow presentation time as well as commentary, moderator Daniel Iacofano  took pains to say that the demonstration projects were subject to environmental review, decisions had not been made, and community input was sought. [We remain unconvinced. The only “community” suggestions incorporated came from the Stewards, to expand the number and acreage of demonstration projects. The new trails suggestion may also have originated with them; the best rationale came from Craig Dawson.]

UCSF had something entirely new: three proposed trails in addition to the ones already there. 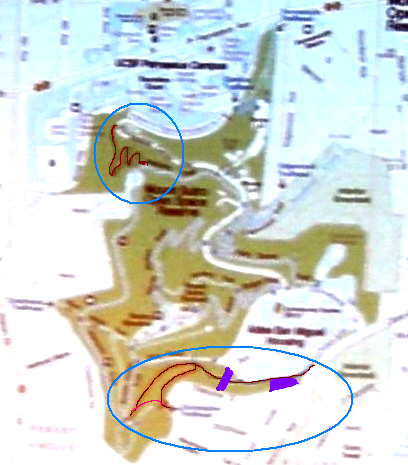 One  would be a multi-curve trail to give easier access from the UCSF campus. Once commenter pointed out that such a layout looked unnecessarily disturbing to habitat.

The second would be a re-alignment and extension of the current trail that accesses the South Ridge trail from Christopher Drive into a hairpin. (We fear this would probably be very visible from the road and the other bend of the trail. It would feel less like a forest than a park.)

The third would run from Clarendon Avenue, between the Aldea student housing to meet the new South Ridge trail. Craig Dawson explained that UCSF prefers not to have forest visitors use Aldea as an access road.

(We are not sure how they would achieve this, as the forest in that area is barely a screen planting, and we are not even sure there is space for a trail through the trees. It would be like walking through someone’s hedge. The PUC project has left huge gaps in the forest: the new pump station; the space where they removed the old pump station; and the Gash where water-pipes were run down from the water-tank on UCSF property. And anyway, both the Fairy Gates trail and the East Ridge Trail actually do end on the Aldea campus. We cannot see how this would make any difference.)

Under the heading of demonstration projects, we were surprised to see a revival of the “fire hazard” discussion with the 2005 URS map that purported to be drawn from CalFire, but wasn’t. (The discussion was a replay of the material here.) Cal Fire had a subsequent note on its website saying it had found no areas of very severe fire hazard in San Francisco. We raised the risk of creating a fire hazard by drying out the forest, as happened in 1934.

Vice Chancellor Barbara French also mentioned that the SF Fire Department had recently asked for UCSF to act on a hazard near some homes.

Walter Caplan, President of Forest Knolls Neighborhood Organization, pointed out that the call was in response to neighbors’ complaints on Crestmont. (This is an area of hazardous leaning trees which the city says is UCSF responsibility and vice versa.) Later, in an informal conversation, we learned that UCSF is trying to resolve the issue with the City. It’s a falling tree hazard, not a fire hazard.

The budget was discussed again. Vice-Chancellor Barbara French said the budget was $150K for the Demonstration projects including the Environmental review under CEQA. This would not include any of the UCSF staff time, but only amounts paid out.

The following points were recorded as comments:

UCSF made a strong case that it could not control eucalyptus, blackberry and poison oak without herbicides, and expected to use Roundup and Garlon. (Someone also asked about Imazapyr.) Some speakers supported herbicide use as the only practical and cost-effective way to control regrowth; others said it didn’t work, and that the long term impact and cost of toxic chemicals were seldom factored into cost structures. There were new studies coming out revealing these chemicals were much more toxic than the early studies had shown (because the early studies were all by the manufacturers.)  There was some discussion around very targeted use, with painting on of herbicides, no spraying. (However, if the purpose is to control poison oak and blackberry, we are unclear how this would happen.)

The need for a thorough study was discussed. Someone pointed out that most mammals are nocturnal and secretive; the consultant from LSA was confident that their wildlife biologist would be able to inventory them by the traces they left. They also acknowledged that the bird nesting season – noted as February-June in the Timeline – was wrong. (Actually, in an earlier version,  it said February-July.)  But LSA noted that actually, with the possibility of second broods, the nesting could continue from January into August. Commenters pointed out the need for a thorough inventory that included fungi, mycorhizzae and soil bacteria, and suggested taking the time to get it right.

[ETA: We received a letter from a law firm representing the San Francisco Parks Trust and the Sutro Stewards demanding removal of the map we used to illustrate this article.  We believe the map to be non-copyright.

Nevertheless, we have taken down the map. We expect to replace it later with another one with the equivalent information.] 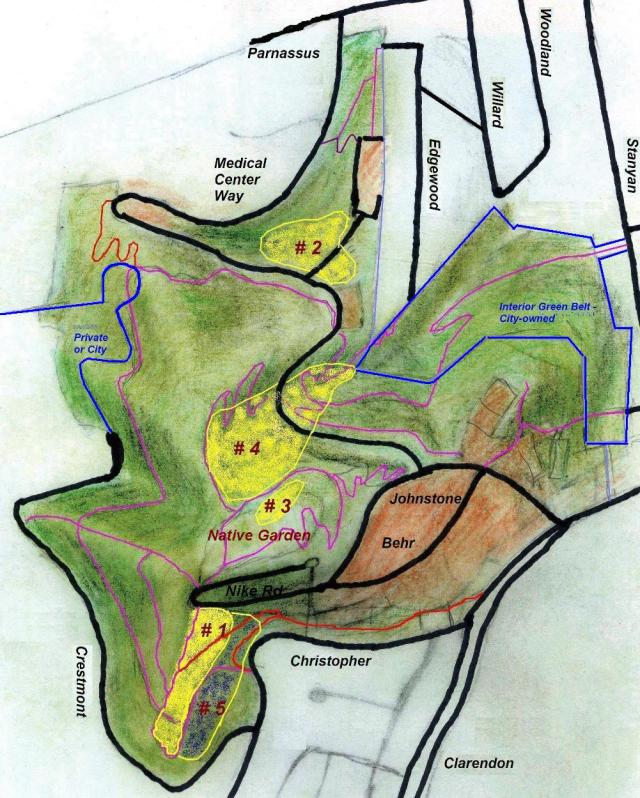 The map above gives our rough estimate of what the effect will be of the four demonstration projects (yellow), and the new trails (dark red).

The map does not show the effect of extending the demonstration projects to 40 more acres as planned.