This is a report on UCSF’s May 25th Community meeting. There are some changes following from previous meetings:

In response to the inputs at the Agenda-setting session, UCSF’s Sutro timeline has been revised, and the Environmental review portion detailed further.  (And in response to our humorous “black box” comment, the time-line was provided in color!)  If you click on the Time Line picture below, and click on it again, a larger version will appear. 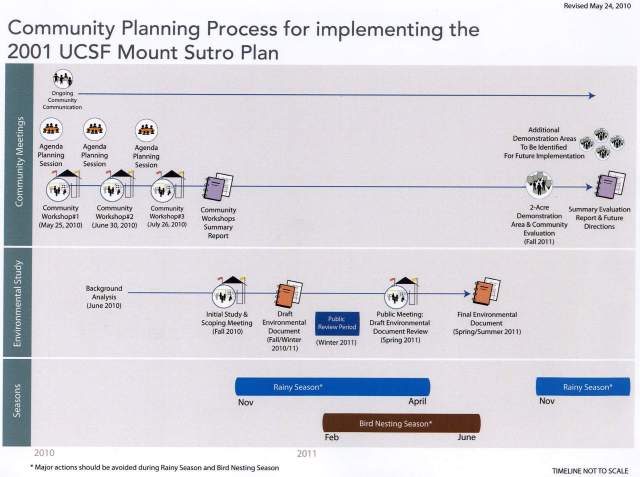 The meeting was not very well attended (compared to previous Forest meetings). There was a substantial contingent from UCSF; a small group from the Native Plant supporters (mainly the Mt Sutro Stewards); and another from the neighbors associated with saving the Forest. Many who came to the agenda-planning session did not come for this one. Only one person present had not been to earlier meetings; her concern was hazardous trees and potential landslides above Kirkham Heights (on the western side of the forest).

The other major change was that we’re now talking about three demonstration areas. 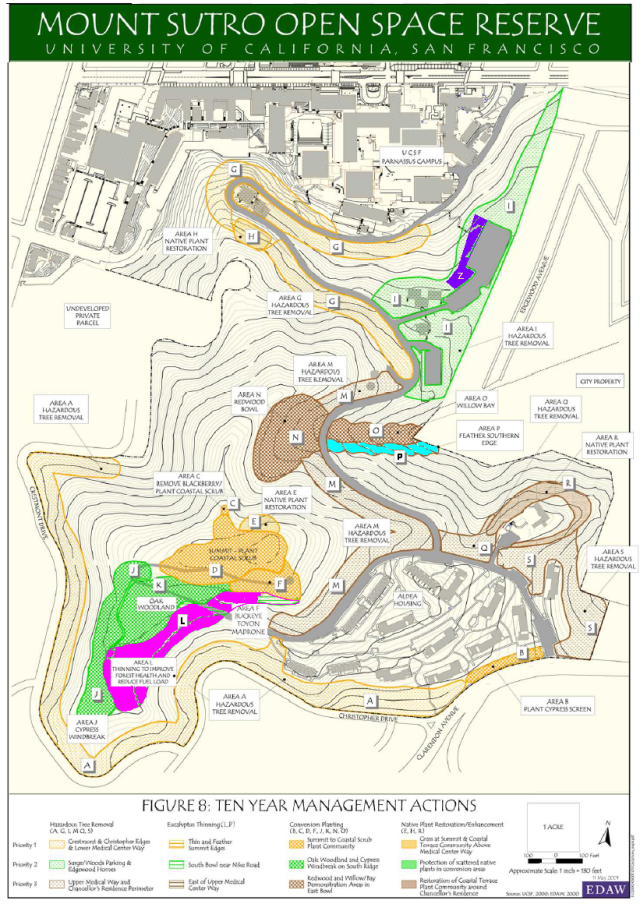 The first remains area L on South Ridge, shown in pink. This is just above Forest Knolls.  Here, the proposal is to “thin” the trees to average 30 feet apart, and remove the entire understory (“mow it down” according to forester Ralph Osterling). The issue of herbicides remains open. The second is below the parking lot behind Edgewood. This area was not actually defined, but was estimated at about one acre. We have inserted the purple area (Z) as our best guess as to where it would be. In this area, the trees are already well-spaced and the understory quite thin, so very little would be done other than Safety Pruning, canopy raising (trimming away lower branches and removing vines), and hazardous tree removal. Again, the issue of herbicides remains open, but seems to be considered more sensitive. The third, if it gets to that, would be the area  P shown in blue; it runs along the seasonal creek and abuts the Interior Green Belt. The Nativists saw this as a potential stream restoration project, with the planting of willows. A neighbor pointed out that this would be a particularly risky place to use herbicides.

We objected to the use of South Ridge as a demonstration area, for the following reasons:

1. As a long thin strip along the whole of the South Ridge, it could impact a much wider area than just the two acres with an added risk of windthrow for trees below it (i.e. trees being knocked down by the wind). This is a windy area of the mountain, and tree removal thin the windbreak we have there now.

2. The planned “thinning” and gutting of the understory would inevitably affect the integrity of the forest, which is a functional cloud forest, by drying it out.

3. This would impact wildlife in the forest.

4. Visually, it would be evident both from inside and outside the forest.

5. Inevitably, herbicides used on high ground above the Forest Knolls would wash down the hillside into our community.

Kirkham was proposed as an alternative demonstration site, but Steward Dan Schneider said that area was complicated by private ownership of some of the land in the area.

No one from Edgewood was present at the meeting. The issues there are noise from the power plant and visual screening from the rear of the UCSF buildings.

The presenters emphasized a focus on Adaptive Management – i.e., do something, see its impact, then take the next step based on the new information.

The meeting opened with a welcome from Vice-Chancellor Barbara French, and was run by Daniel Iafacano. Lori Yamauchi and Maric Munn made the same presentations as they made at earlier meetings; Ray Moritz, a forester hired by UCSF made the same presentation about other eucalyptus thinning projects in the Bay Area as at the March 2010 meeting. (All the presentations – including Diane Wong’s on Environmental Review – are here as a PDF file at UCSF’s website.)

Since the group was fairly small, there was time for questions, and the native bird “beak-gumming” myth got some discussion in the context of the Highway 1 project (which was completed in 2009) and had native bird habitat as one of its objectives.  (This was part of Ray Moritz’s presentation on other examples of eucalyptus thinning.)

Diane Wong (UCSF Campus Planning) made a presentation about the planned Environmental Review (ER), and responded to some of the questions we had emailed earlier.

1. UCSF is a lead agency and can do its own ER. It will be done by UCSF staff, staff from the Office of the President, consultants with UCSF supervision, and attorneys both inhouse and outside.

2. They must look at all actions that could potentially be taken on the mountain to avoid “piecemealing” where the project is broken into tiny portion, each of which is innocuous but which together have a major impact. They must look at the full range of potential outcomes from the Adaptive Management plan.

3. The proposed project is not exempt. After an initial study, they would use a Circulated Document to either get a Negative Declaration (i.e. that they project will not have a significant impact) or require a full Environmental Impact Report.

4. In terms of experience, UCSF has been the lead agency for several EIRs:  the Long-Range Development Plan, the Mission Bay campus, the helipad Supplementary EIR, the Osher Building EIR and addendum, and the Regenerative Medicine Building (i.e. the “Stem Cell Research Building”).

6. Diane produced a list of community concerns that essentially came out of the agenda-setting meeting. We added one: Wildlife.

7. Diane also mentioned activities that were exempt from the moratorium on changes while the ER was in progress: maintenance, such as pruning and shrub and weed removal and trail maintenance; hazardous tree management; gardening such as new plantings in the Native Garden; and minor changes like adding trail markers.

The other issues were the same ones that have been raised before: The Nativists (and the Moderator!) talked about bio-diversity; the Stewards, about native plants. We talked about an ecological survey and preserving the integrity of the eco-system; other neighbors raised the issues of wildlife – including insects and reptiles.  We tried to put the issue of bio-diversity into the larger context of the Western part of the city. Herbicides were mentioned, and will be discussed in more depth at later meetings.

A representative of San Francisco Urban Riders (who is also a founder member of the Stewards) spoke of  View Corridors (i.e. removal of trees and understory to allow views of the city).

A neighbor asked if there was any chance, in the context of the new Long Range Plan (2012-2020), that either or both of the two areas of South Ridge and Edgewood would be used for other purposes such as construction. Lori Yamauchi, Assistant Vice Chancellor-Campus Planning, said UCSF had a complete commitment to maintaining the entire 61 acres as open space.