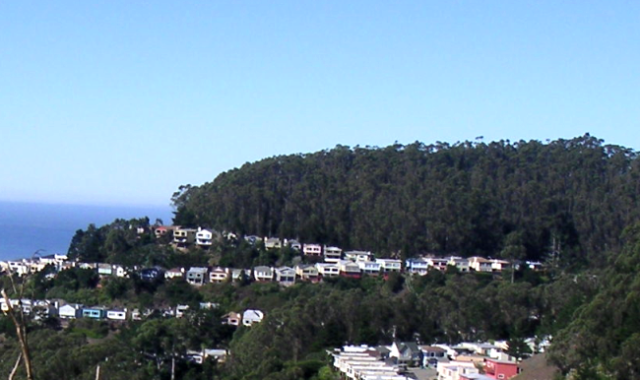 We’re reading the Draft Environmental Impact Report (DEIR) for the 2017 Sutro Forest Plan, and got to the section on landslide risk. This has been one of our concerns, especially since the tragedy at Oso, Washington, where the felling of trees in previous years was a factor in destabilizing the slope. (We wrote about that HERE: Cut Trees, Add Landslide Risk) We know this area is subject to landslides – we had a blue tarp covering unstable areas in Forest Knolls for a year when cutting trees destabilized a slope, and another just above UCSF’s Aldea housing area. 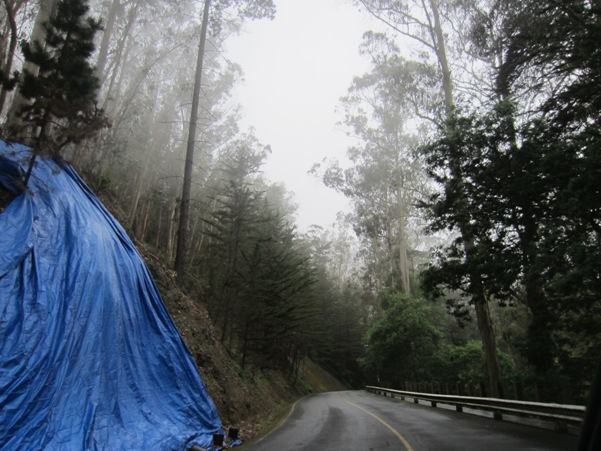 We were shocked at what we found in the DEIR:
“Increased instability could cause a landslide that would impact Crestmont Drive, Christopher Drive, and Johnstone Drive. An existing landslide scarp is visible above Christopher Drive. Some homes along Christopher Drive could be placed at additional risk from localized landslides due to plan implementation. Phase I activities would result in a potentially significant impact…”

What’s the proposed “mitigation”? Avoiding work in the forest for 2 days when the soil is wet after rain. This completely ignores the fact that landslides are a MULTI-YEAR hazard after tree removal.

Here’s the proposed mitigation in their own words:
“After a significant storm event (defined as 0.5 inches of rain within a 48-hour or greater period), the following conditions shall be met prior to any vegetation management activities:

In other words, we won’t chop down trees in the rain or when the soil is wet.

Other mitigations are palliative. They’re planning to build roads into the forest for trucks and heavy equipment, and those roads will follow the contour of the slope. The quarter-acre staging plazas – where they’ll remove trees so trucks can turn around and heavy equipment be parked – will be flattish, with a slight slope for drainage. None of this is as effective as not building these roads or bringing in heavy equipment in the first place.

WHY THE MITIGATION IS MEANINGLESS

The problem is, the effect of cutting down trees is a LONG TERM problem. The effect of tree removal takes years – not days, not months – to fix. In Oso, Washington, the slope gave way three years after the last tree-destruction. Here’s the story (from the article we published at the time). The tragedy was foreseen… but the regulators thought they had enough mitigations in place.

On March 22, 2014, a huge landslide destroyed the small Washington community of Oso. Rain was of course a factor, as was erosion at the base of the slope. But it’s probable that tree-cutting above the slide area was an important factor too. An article in the Seattle Times that quotes a report from Lee Benda, a University of Washington geologist. It said tree removal could increase soil water “on the order of 20 to 35 percent” — and that the impact could last 16-27 years, until new trees matured. Benda looked at past slides on the hill and found they occurred within five to 10 years of harvests [i.e. felling trees for timber].

There had been red flags before. The area was second growth forest, grown back from logging in the 1920s/30s. Over 300 acres were again logged in the late 1980s.

The first time regulators tried to stop logging on the hill was in 1988. But the owner of the timber successfully argued that measures could be taken to mitigate the risk. Eventually, the state only blocked it from logging some 48 acres, and the owners  gave in on that.

In 2004, new owners applied to cut 15 acres; when the Department of Natural Resources (DNR) objected, they halved the area and re-located the cut. DNR gave approval, subject to no work during heavy rain and for a day afterward. The tree-cutting finished in August 2005.

In January 2006, there was a major landslide 600 feet from the cut zone. The state built a log wall to shore up the slope.

The regulators were aware of the risk; they thought they were mitigating it with their restrictions and reaching a compromise with the owners. But it wasn’t enough. Destabilizing the mountainside is a long-term thing; the effects can show up in months, but it’s more likely to take years.

THE LESSON FOR MOUNT SUTRO

Our mountains not only are potentially unstable, they actually have landslides. The picture at the end of this article shows one on Twin Peaks, where rocks tumble after nearly every heavy rainy season.

The roots of the trees are helping to hold the unstable soil in place and that as the roots rot, landslide risk will increase.  It is going to be more unstable 2-3 years after the trees are removed than 2 days after it rains.  The information that instability increases over time is a little counter-intuitive.

Moreover, removing the trees takes away their ability to suck water out of the soil. If the tree-cutting is done in dry years, it may take a wet winter to trigger landslides… which would not have happened if the trees had been regulating the water and functioning as a living geotextile.

Since UCSF are not going to use herbicides on the stumps to prevent them from resprouting, they say they will grind the stumps.  That is an effective way to prevent resprouting, but it will greatly increase the instability of the soil because the heavy equipment digs down several feet into the stump to destroy the roots.  That’s another reason why they should not destroy trees where slide risk has been identified.

Anyone seriously considering the map above can only hope that UCSF will draw a better conclusion than the Washington State loggers and regulators. The planned destruction of thousands of trees – many within the first five years – could cause landslides in surrounding communities not days or months later, but years after the event.

UCSF: First, do no harm!