The older a tree grows, the more carbon dioxide it grabs out of the air and sequesters, thus fighting climate change. Cutting down these large old trees releases this carbon back into the atmosphere.

An article published in the Nature Journal summarizes the results of a huge research project by the US Geological Survey. This directly disproves the myth that young trees sequester carbon rapidly, but large old trees do not.

“The trees that are adding the most mass are the biggest ones, and that holds pretty much everywhere on Earth that we looked,” says Nathan Stephenson, an ecologist at the US Geological Survey in Three Rivers, California, and the first author of the study, which appears today [i.e. 15th January 2014]  in Nature.

“Trees have the equivalent of an adolescent growth spurt, but it
just keeps going.”

The study, which looked at over 673 thousand trees of more than 400 species, found it was universally true.  This confirmed the results of a 2010 study that had focused on redwoods and on a eucalyptus species. 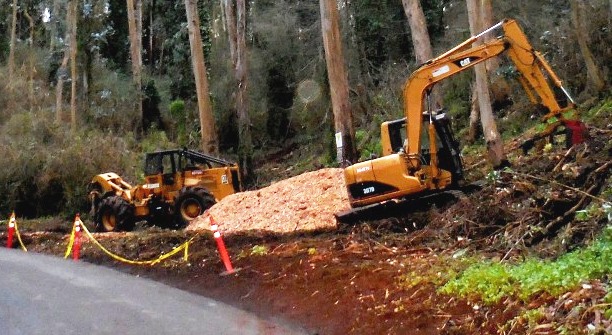 All the huge old trees that are cut down in San Francisco were fighting climate change – but now, whether as mulch or as rotting logs, they are contributing to it.

DETAILS OF THE STUDY

Here is the abstract of the study, from the NIH website [formatting and emphasis ours]:

Abstract
Forests are major components of the global carbon cycle, providing substantial feedback to atmospheric greenhouse gas concentrations. Our ability to understand and predict changes in the forest carbon cycle–particularly net primary productivity and carbon storage–increasingly relies on models that represent biological processes across several scales of biological organization, from tree leaves to forest stands. Yet, despite advances in our understanding of productivity at the scales of leaves and stands, no consensus exists about the nature of productivity at the scale of the individual tree, in part because we lack a broad empirical assessment of whether rates of absolute tree mass growth (and thus carbon accumulation) decrease, remain constant, or increase as trees increase in size and age.

Here we present a global analysis of 403 tropical and temperate tree species, showing that for most species mass growth rate increases continuously with tree size. Thus, large, old trees do not act simply as senescent carbon reservoirs but actively fix large amounts of carbon compared to smaller trees; at the extreme, a single big tree can add the same amount of carbon to the forest within a year as is contained in an entire mid-sized tree.

The apparent paradoxes of individual tree growth increasing with tree size despite declining leaf-level and stand-level productivity can be explained, respectively, by increases in a tree’s total leaf area that outpace declines in productivity per unit of leaf area and, among other factors, age-related reductions in population density. Our results resolve conflicting assumptions about the nature of tree growth, inform efforts to undertand and model forest carbon dynamics, and have additional implications for theories of resource allocation and plant senescence.

And here is a link to the study itself in Nature: Rate of tree carbon accumulation increases continuously with tree size.

This entry was posted in deforestation, Environment, eucalyptus and tagged environment, trees. Bookmark the permalink.