Why “Thinning” Damages a Forest

This article is republished with permission (and minor format changes) from Death of a Million Trees, a blog dedicated to fighting unnecessary tree-felling in the San Francisco Bay Area.

It beautifully reflects the interlinked reality of Sutro Forest, which has flourished for over a century, and now is threatened with massive tree removals on the pretext that they are “dead and dying.” As the article points out: “…in nature, trees operate less like individuals and more as communal beings. Working together in networks and sharing resources, they increase their resistance.”

We would like to remind our readers of an article from a few years ago, Something like Avatar: Mt Sutro’s Networked Forest where we also explored linkages within the forest. We hope this will encourage UCSF to think in terms of the integrity of the forest and its ecosystem, not just as a collection of trees occupying a space nativists want for other things. 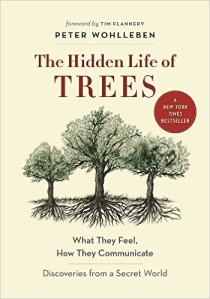 The Hidden Life of Trees was written by a German forester, Peter Wohlleben. After completion of formal academic training as a forester, he took a government job managing a 3,000 acre public forest. After 20 years of managing that forest for timber production with chainsaws, bulldozers, and insecticides, he decided about 10 years ago that he could not continue damaging the forest he had fallen in love with.

He resolved to manage a forest for the benefit of the forest, rather than for economic benefit. In fact, he was able to do both. The community for which he had been managing its forest for timber, decided to change its mission to forest preservation: “So, 10 years ago, the municipality took a chance. It ended its contract with the state forestry administration, and hired Mr. Wohlleben directly. He brought in horses, eliminated insecticides and began experimenting with letting the woods grow wilder. Within two years, the forest went from loss to profit, in part by eliminating expensive machinery and chemicals.” (1)

THE FOREST EDUCATES THE FORESTER

In the decades that Mr. Wohlleben has cared for the forest, he has learned a great deal about the trees, and more importantly how the trees function as a community in the forest: “…in nature, trees operate less like individuals and more as communal beings. Working together in networks and sharing resources, they increase their resistance.” (1)

In The Hidden Life of Trees, Mr. Wohlleben tells us how the trees communicate and share resources in the forest. When foresters interrupt these functions by artificially spacing out the trees, they can disconnect the trees from their networks, depriving them of their natural resilience mechanisms.

HOW DO TREES COMMUNICATE?

Scent is one of the means of communication between trees. On the African savannah Acacia trees are one of the favorite food of giraffes. When the giraffes start munching on the Acacia, the tree pumps a powerful toxin into its leaves that makes it unpalatable to the giraffes. The scent of that toxin is wafted to neighboring Acacia trees, which triggers them to start pumping that toxin into their leaves, making them unpalatable before the giraffes even get to them. If the distance between the trees is increased beyond the range of the scent message, the Acacias are unprepared for the giraffes when they arrive after being repelled by the toxic defense of their distant neighbors.

THE UNDERGROUND COMMUNICATION AND DEFENSE SYSTEM

The roots of trees radiate out from the trunk forming a perimeter of roots that is often twice as big as the canopy. In the forest, the root systems of neighboring trees often intersect and grow into one another. The trees in the forest are also connected underground by a web of fungi that connect the roots of a tree to its neighbors. These connections transmit signals from one tree to the next, “helping the trees exchange news about insects, drought, and other dangers.” (2)

This network of roots and fungi is also how trees share resources in the forest. Every tree in the forest lives in a slightly different environment such as the nutrients in the soil, the physical composition of the soil, the available light, etc. Despite these differences in available resources, researchers at the Institute for Environmental Research in Germany discovered that the trees distribute available resources throughout the forest so that every tree was photosynthesizing* at the same rate. That is, every tree in the forest was sharing an equal amount of the sugar produced by photosynthesis: “Their enormous networks act as gigantic redistribution mechanisms. It’s a bit like the way social security systems operate to ensure individual members of society don’t fall too far behind.” (2)

Wohlleben’s analogy, suggesting that the sharing economy of the forest is comparable to our social safety net is thought provoking. Let’s think about it. Are the trees being generous to their neighbors in the forest by alerting them to dangers and sharing resources with them? No, because by benefiting their neighbors, the trees also benefit themselves: “This is because a tree can be only as strong as the forest that surrounds it…Their well-being depends on their community, and when the supposedly feeble trees disappear, the others lose as well. When that happens, the forest is no longer a single closed unit. Hot sun and swirling winds can now penetrate to the forest floor and disrupts the moist, cool climate.” (2)

If the trees in the forest benefit by being close to one another, why do the local managers of our public lands keep telling us that “thinning” the forest will be good for the forest? Wohlleben tells us that the conventional wisdom that thinning the forest is good for the trees originates with the timber industry: “In commercial forests, trees are supposed to grow thick trunks and be harvest ready as quickly as possible. And to do that, they need a lot of space and large, symmetrical, rounded crowns. In regular five-year cycles, any supposed competition is cut down so that the remaining trees are free to grow. Because these trees will never grow old—they are destined for the sawmill when they are only about a hundred [in Germany]—the negative effects of this management practice are barely noticeable.” (2)

Our urban forest is not “destined for the sawmill,” so thinning the urban forest does not benefit either the trees that remain or the forest as a whole. The “thinning” strategy being used by the managers of our public lands is damaging both the forest and the environment:

The Hidden Life of Trees informs us that the forest is greater than the sum of its parts. Every tree contributes to forest health just as every member of society contributes to the well-being of our communities.

*Photosynthesis is the process used by plants to convert light energy into chemical energy that is stored in carbohydrate molecules, such as sugars. The sugars are the fuel that enable plants to live and grow. (Wikipedia)

This entry was posted in Environment, nativism, UCSF and tagged cloud forest, drying out the forest, ecology, environment. Bookmark the permalink.
Loading Comments...
%d bloggers like this: