As readers of this site will know, we’ve been following the use of pesticides in Natural Areas. At present, four pesticides are mainly used by the Natural Areas Program (NAP): Glyphosate (trade-names Roundup or Aquamaster); Triclopyr (Garlon and its variants); Imazapyr (Polaris or Habitat); and Amino-pyralid (Milestone). [Here’s our article about these pesticides and our concerns: Natural Areas Program’s Pesticides: Toxic and Toxic-er.]

The SF Department of the Environment (SFDOE) has said that pesticide use [in the Natural Areas] has fallen. Since that wasn’t what we were seeing, we asked them how come. Apparently, it all depends on two things:

This article will try to tease out those factors. There are four ways in which we can measure pesticide use, and each one tells us something slightly different.

This tells us how many times pesticides were used in Natural Areas. It measures opportunities for exposure to pesticides.

This graph shows the number of applications for the years 2008- 2011, based on data we got from the city under the Sunshine Act.

What do we mean by “opportunities for exposure”? Here’s a thought experiment: Supposing the NAP used all their pesticides at one time in one place. We’d get a big brown patch of dead vegetation, but it wouldn’t have much impact outside that area. If you wanted to avoid pesticide exposure, that would be the place to avoid.

If instead, smaller amounts are sprayed over many parks and many occasions, then the potential to be exposed is much higher. This is what actually happens. 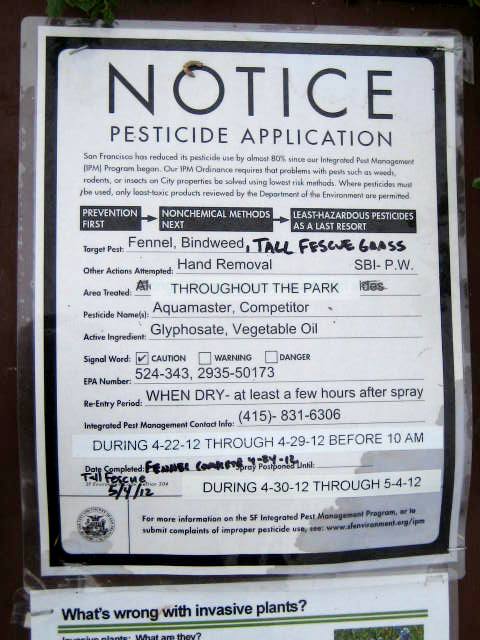 McLaren: Pesticide use “Throughout the Park”

This is a simple total of all the pesticides used in the Natural Areas, calculated in fluid ounces. It includes the “inert” chemicals – the ones the chemicals companies don’t have to provide any information on, because they aren’t herbicides. But, in some cases, the chemicals are not actually inert. Sometimes, they’re toxic. One example is POEA, the chemical used in some formulations of Roundup.

Amount of Active Ingredient in the Pesticide

This measure omits the “inert” chemicals in the herbicide, and only considers the so-called “active ingredient.” These are typically chemical compounds based on the named pesticide, like Glyphosate Ammonium salt, or Glyphosate Iso-propylamine salt. Here’s the graph for NAP’s pesticide usage on the basis of the “Active Ingredient.”

4.  Pesticide Use by “Acid Equivalent”

This is a bit technical, but as long as we’re talking of “active ingredients” this is a more accurate way of calculating it.  Here’s the explanation. 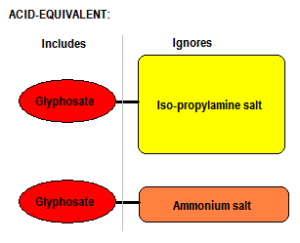 Let’s consider Roundup (or Aquamaster), where the active ingredient is “glyphosate.”

Various versions of Roundup use different glyphosate compounds (like the ammonium salt or the iso-propylamine salt we mentioned above). These molecules are different in size. A heavy molecule has proportionately less actual “glyphosate” than a smaller molecule because the glyphosate part is the same, only the back end, the “salt” is different. So an ounce of iso-propylamine salt would have less glyphosate than an ounce of ammonium salt. 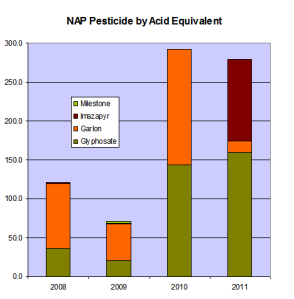 It’s the glyphosate that is the herbicide.

So what acid equivalent does is measure only the glyphosate part of it. It omits the varying “salt” end of the molecule. (It’s the same for other pesticides like imazapyr or Garlon.)

What difference does it make?

In order to compare these various ways of measuring pesticide use, we looked at how they’ve changed from 2008, the first year for which we have NAP’s pesticide data. (Since they’re all different units, we used Index numbers. We took 2008 levels to equal 100, and compared them to that. So an index of 200 would mean it doubled compared to the 2008 level.)

SF DEPARTMENT OF THE ENVIRONMENT

We’re generally fans of SF DOE. As we said in another post, “We’re aware of San Francisco’s Department of the Environment as the first line of defense against toxic chemicals in our public lands. But they’re more than the defense-against-the-dark-chems guys. They’re the recycling guys. The energy saving guys. The community gardens and Green Businesses guys.”

They run our city’s Integrated Pest Management (IPM) system. In the last year or so, they’ve encouraged a number of helpful changes:

The SF RPD is  reducing the amount of pesticides used on golf courses (except, we understand, for Harding which apparently has some kind of agreement that requires pesticide use to keep it tournament-ready). In Sharp Park golf course in Pacifica, no pesticides have been used since August 2010, to the best of our knowledge.

SO WHY TOXIC PESTICIDES IN “NATURAL AREAS”?

We’ve called for no Tier II (hazardous) or Tier I (most hazardous) pesticides in Natural Areas.

NAP justifies pesticide use in the name of “bio-diversity” – but there’s no indication that the activities of the NAP actually increase bio-diversity at all. Instead, they destroy naturalized vegetation that insects, birds and animals actually use as habitat.  They have targeted, to our knowledge, over two dozen different species of plants. Thus far.

We understand that the SF DOE does not control the NAP’s pesticide use. We asked, at a SF DOE meeting, what happens if a department violated the IPM. The answer was “They’d be embarrassed.” Assuming a lack of embarrassment, it doesn’t appear there are any sanctions. (If we’re wrong, we hope someone will correct us.)

Most people expect Natural Areas to be natural. They don’t expect massive landscaping efforts including the felling of thousands of trees, or the frequent use of toxic pesticides.

It appears that the only way to stop NAP from using Tier II (Hazardous) and Tier I (Most Hazardous) pesticides is if San Francisco’s citizens demand it. 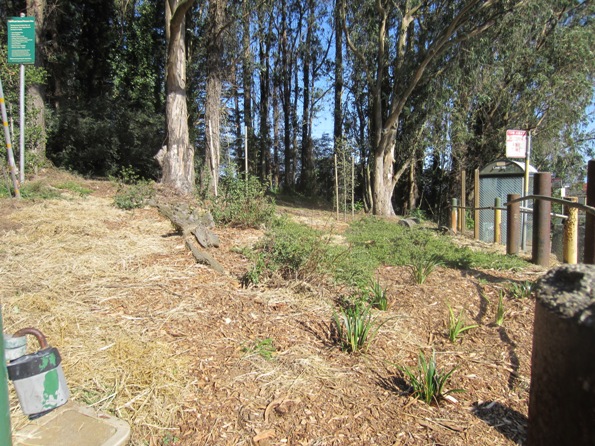