What Will Sutro Forest Look Like After the Plan?

It’s going to look pretty awful in Sutro Forest when UCSF implement the Plan. The most immediate action: Cut down thousands of trees. Here’s what the Draft Environmental Impact Report (DEIR) says:

“The density of the forest would experience the most rapid decrease during Phase I of the plan. The largest number of trees and largest amount of vegetation would be removed during Phase I to manage forest treatments areas, defensible space, and native restoration areas.”

Phase I is what will start immediately after the Environmental Impact Report is certified, probably this Fall.

The impact is going to be Significant and Unavoidable, according to the DEIR.

The “Aesthetics” section of the DEIR shows “before” and simulated “after” pictures of the forest from 5 strategically selected vantage points, or “Key Observation Points.” (The map showing where they are is at the end of this article.)

THE AESTHETICS SECTION OF THE DEIR – From Outside the Forest:

Only one of the Key Observation Points  is outside the forest, and for some quixotic reason, it’s taken from Midtown Terrace, from a location where there’s no clear view of the forest. There are no simulations of the look from the communities immediately surrounding the forest – Cole Valley, Forest Knolls, Inner Sunset, even though the DEIR notes that those neighbors are most aware of how the forest looks. There’s no simulation from the obvious viewpoint, Twin Peaks.

For the external view, they admit: “…the removal of trees would reduce forest density and create a gap near the south side of the Reserve…” but deny it’s significant. We were unable to replicate the picture that UCSF has in its DEIR.  But here they are. They show barely any change.

We doubt this is accurate, and we don’t think they’re considering the impact of all the other tree removals for the road, the staging areas, and the groups of trees they just want to cut down.

Here’s our picture of Sutro Forest from the South –  from Twin Peaks – before tree-felling.

Here’s our own  best guess simulation of what it will look like after they’ve hacked down many of the South Ridge trees. We’re using a basic Paint program, so it’s crude, but we think it gives a better idea. (This may even be optimistic.)

Or, when they eventually manage to destroy all the trees… 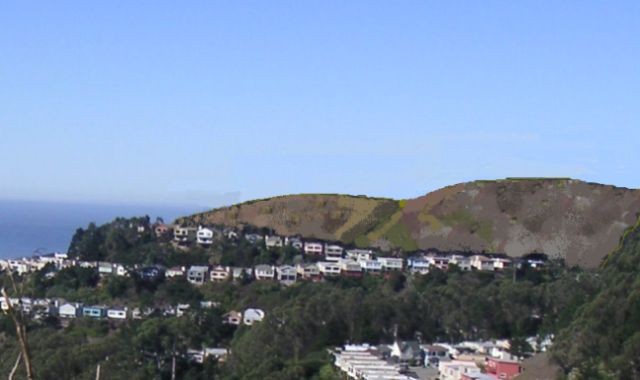 From the Cole Valley side, UCSF provides no simulation at all. Yet one of the major areas for tree removal lies just above Medical Center Way, the paved road that bifurcates the forest. Here’s the view from Tank Hill:

Here’s what would happen with removal of the large trees above Medical Center Way. 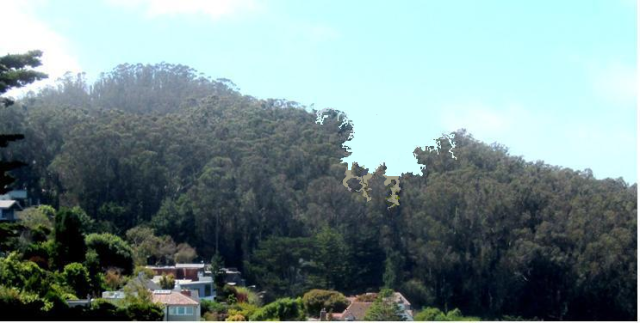 And then – if the trees gradually get removed, maybe it will return to this. (The second picture below is an actual photograph from before the trees were planted.) 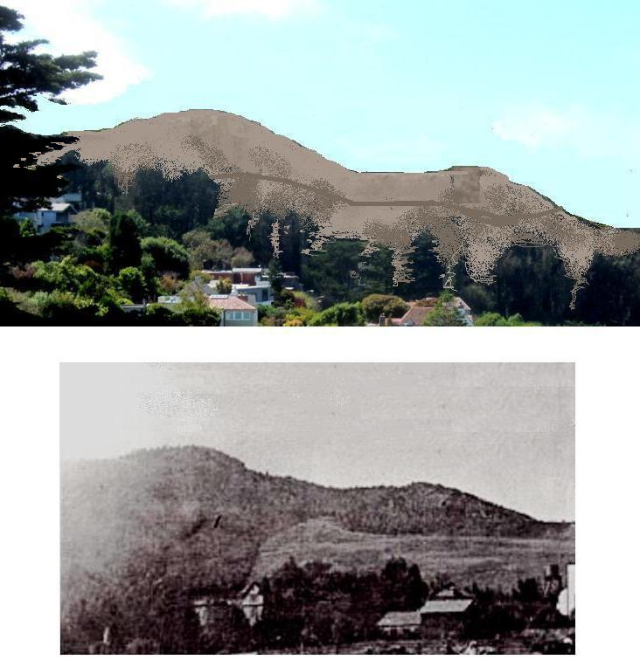 AESTHETICS FROM INSIDE THE FOREST

The Aesthetics section argues that for hikers, the dead trees uglify the forest. We suspect that the authors of the study have no understanding of how a naturalized forest looks. It’s supposed to have trees in all conditions – they all have a part to play in the forest’s ecology.

They show four simulations from inside the forest, of dubious accuracy. The pictures show many trees gone, but they show a lot of understory remaining – even though the plan is to gut the understory.

The first picture looks like a forest. The second – well it’s a trail, with some trees around. And they show distant views, which in real life will only appear a few days each year – this is, after all, a Cloud Forest right inside the Fog Belt. Much of the year, it’s look like this.

If you love the mysterious, green, dense Cloud Forest on Mount Sutro, you should plan to make memories really soon. And get your comments to UCSF in.  If the Plan is implemented this year, as is planned, the forest you know will be gone in months.

Here’s the map of the Key Observation Points (including the only one from outside the forest – in Midtown Terrace).