Someone sent us a really interesting article about Sutro Forest in a recent San Francisco Chronicle (25th June, 2016). 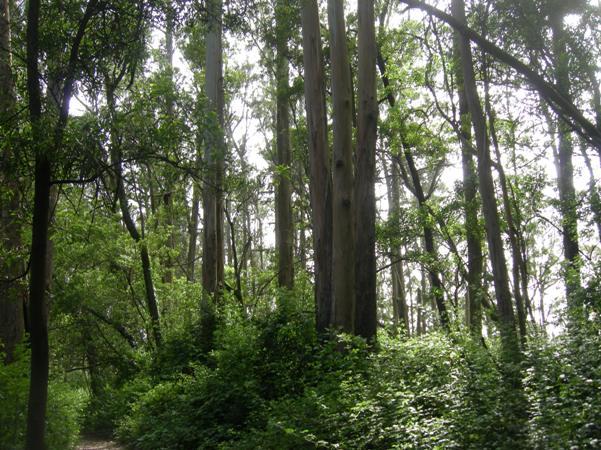 Titled “New battle over managing Sutro Forest trees,” the article is by well-known journalist Carl Nolte. It starts with a wonderful description of the forest:

‘The forest, 80 or so acres of wild land in the heart of San Francisco, is almost a mystical place. It is a woodland of tall eucalyptus trees, and a green, almost impenetrable, undergrowth of ivy, blackberries and brush, laced with 5 miles of trails. A ﬁve-minute walk into the woods takes you away from the city. The only sounds are the wind in the trees, and the only sights are the trees and the trail ahead. “There is a sense of tranquility,” said Morley Singer, a retired physician who loves the forest. “You kind of disconnect from the world.” ‘

Enhanced by some atmospheric photographs by Liz Hafalia, the article captures both the character of the forest – and the controversy.

It mentions the history of the 80-acre forest – that it’s 130 years old, and was planted by mining magnate (and philanthropist) Adolph Sutro; that it’s mostly owned by UCSF, but for the 20 acres or so owned by the City as the Interior Green Belt.  It quotes Dr Singer again:

‘Everyone agrees what he planted is a civic treasure, and none more than Singer, who took a reporter on a walk through the woods, pointing out the trees, the fog canopy, and listening to the silence. “It is a forest surrounded by 7 or 8 million people,” he said, “But when you are up here, you are in magic territory. You could be up in the Sierra on the Muir Trail.”’

It also mentioned the threat: That thousands of trees will be cut down, destroying the forest. UCSF was interviewed, as was Craig Dawson, executive director of the Sutro Stewards. It’s an organization that works in partnership with UCSF. Dawson wants the forest “managed” – a euphemism for chopping down trees.

When the story started, 16 years ago, UCSF said the trees were old, in bad health and nearing the end of their life. [None of this was actually true – they thought the trees had a life of 100 years, instead of the 300-500 that is actually the case.]

‘It was also noted that the woods were an artiﬁcial forest, that the trees were not native, and therefore it was somehow inferior. Singer calls that view “plant racism.”’

Craig Dawson argues that a “sustainable forest” (as though 130 years is not enough!) has 16-28 trees to an acre, while Sutro Forest has 200-400 trees per acre. “It’s a sick forest” he says, implying that thousands of trees must be cut down.

Dr Joe McBride, Professor Emeritus from UC Berkeley and the Bay Area’s leading authority on eucalyptus, doesn’t agree. The article reports him as saying the forest is not unhealthy, though stressed by drought. It has its own ecosystem, and could last for 200-300 years.

We think it’s well worth reading. Look for the June 25, 2016 Chronicle. Or read it in the (imperfect) PDF below.