Recently, we wrote about the downed trees and stumps along all the trails in Sutro Forest. It turns out this is just the beginning. UCSF recently sent out an email with more details. Under the guise of “safety”, UCSF is conducting a 4-6 week effort through December 2015 and January 2016 to remove more trees and understory in the forest, starting almost immediately. We’re very concerned. 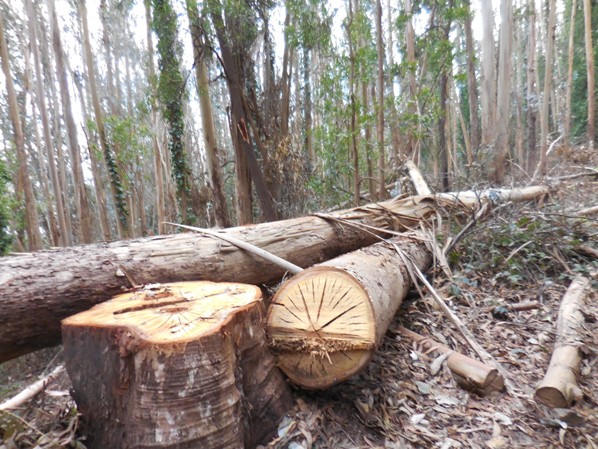 UCSF wrote: “UCSF and the San Francisco Fire Department (SFFD) have separately determined that there is an urgent need to revisit the defensible space work that we performed in 2013 around buildings, roads and neighboring homes (see attached SFFD letter). This work will include removing all flammable vegetation and trimming tree branches up to 10 feet off the ground within 30 feet of structures.  The remaining 70 feet, up to 100 feet of clearance, will include the removal of ladder fuels, which can carry a fire from the ground up to the tree canopy (mostly ivy).”

In fact, though Fire Chief Hayes-White praised the UCSF effort, the SFFD’s actual presentations made it clear that there was no such urgent need. San Francisco’s forests are not a serious fire hazard because of the fog, and shrubs and grass were much more flammable. (See SF Fire Department Busts Some Myths.) The presentations also clarified that there wasn’t any legal requirement, (as was suggested in 2013) because Sutro Forest does not qualify as a “wildland-urban interface.” We are inclined to consider the letter a professional courtesy extended to UCSF, especially since we have correspondence indicating that UCSF drafted the August 2013 letter for the SFFD to issue.

Here’s what  Mount Davidson looked like in September 2015. And it’s what Sutro Forest – which shares the same fog conditions – should look like too. But it doesn’t. 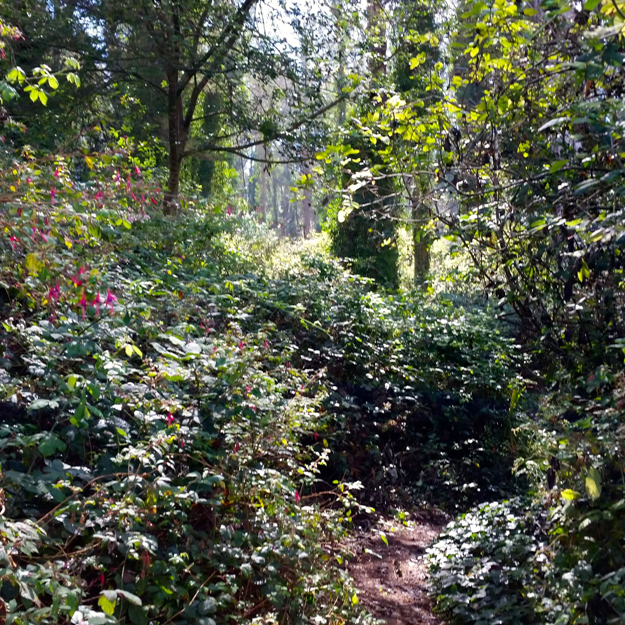 Removing trees and understory compromises the forest’s ability to hold moisture and dries it out. In drought conditions especially, UCSF and the Sutro Stewards should be working to preserve the density and greenery of the forest.

Instead, in Sutro Forest, there’s been extensive removal of understory plants from 2010 onward. More recently, they have been felling “hazardous” trees, many of which were not actually hazardous.  Even trees that are not perfectly healthy precipitate moisture from the fog and delay evaporation by increasing forest density.  The result of the cutting looks like this.

The tragedy of  Oso in Washington, where a landslide destroyed a community, was caused by tree-felling on the slopes above the community – tree-felling that was legal and had been approved, but destroyed the community and many lives anyway. Oftentimes, hired experts produce the answers the client seeks. We expect this tree-removal will destabilize the slopes and increase the potential for landslides. We hope very much that we’re wrong here. Researchers say the risk remains for many years – and in this situation will likely worsen as the tree roots decay and weaken.

UCSF plans to plant native shrubs where it’s removing these trees. Shrubs do not stabilize the slope in the same way as trees. Rockslides all around Twin Peaks provide evidence of that.

(Coincidentally, this is where the new Clarendon connector trail is being built.)

Should any dry area ignite – and native plants that UCSF plans to introduce are dry for much of the year – the fire will be less likely to die down in windier conditions.

Also, with all the tree removal going on, we can expect other trees to be weakened by increased wind speeds and gaps in the intergrafted root system. We expect hundreds or even thousands of trees will be removed each year, depending on the budget available.

UCSF’s actions seem to be the opposite of the measures that would best preserve the forest and the healthy eco-system. So we’re forced to consider a separate agenda. In fact, it appears that UCSF is proceeding with its original plans to convert the forest from the magical dense woodland that people loved into a native shrub area dotted with a few trees.

But instead of introducing a new Environmental Impact Report that would openly state its plans and the consequences for public comment, it is merely chipping away at the forest year by year under the guise of “safety.”

Trees have been cut down every year in recent years – nearly 2,000 by now.  There are huge open areas that used to be dense forest only 3 years ago. The sense of seclusion, of stepping into a magical other world,  is being steadily lost, with the sights and sounds of the city becoming more apparent and those of the forest gradually being destroyed and silenced.

Within a very few years, the transformation would be complete, with thousands of trees removed for one reason or another.

From 2009: Another dense area of Sutro Forest that’s now denuded

This entry was posted in deforestation, Environment, UCSF and tagged drying out the forest, environment, eucalyptus, Sutro Forest, UCSF. Bookmark the permalink.