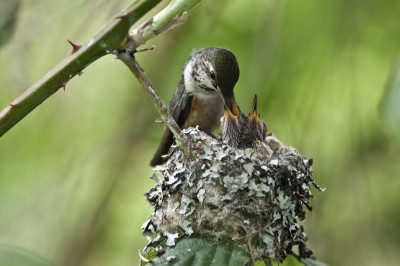 In March 2014, soon after UCSF said it was delaying work on the Draft Environmental Impact Report for now – it sent around this message.

“Beginning on Monday, March 17th, Bartlett Tree Experts will be performing tree work throughout the UCSF Mount Sutro Open Space Reserve trail system in order to mitigate potential hazardous trees. This work will consist of trimming, pruning, and/or removing hazardous trees, branches and limbs that are overhanging, or in close proximity to, trails throughout the Reserve and pose a potential danger to trail users.”

We were surprised, because it was (and is) the height of the bird nesting season. We wrote to UCSF and didn’t get a response. We hoped they were responding to actual concerns regarding a few specific trees. 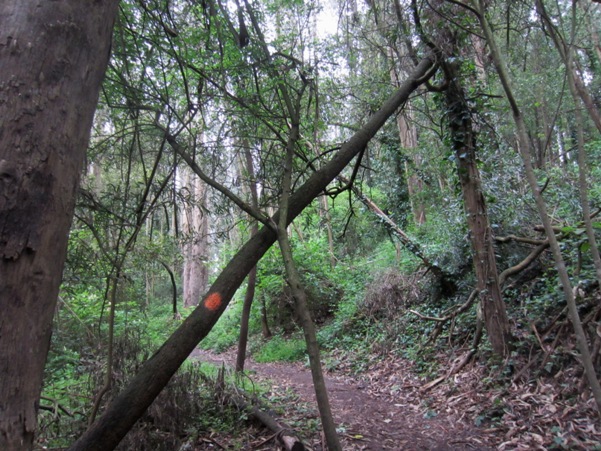 But no. They were removing trees that had been marked over a year earlier – the orange-dotted trees that were in poor condition but not actually hazardous for the most part. 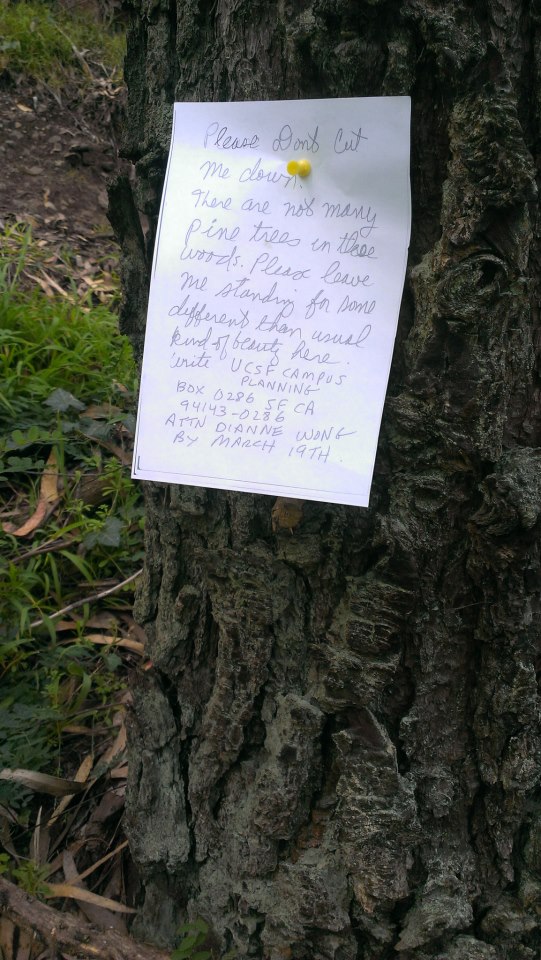 Forest-lovers were dismayed, and pinned notes on the trees saying “Please Don’t Cut Me Down” – we reported on that HERE. They were ignored. On a recent hike in the forest, we discovered most of the orange-dotted trees had been felled. 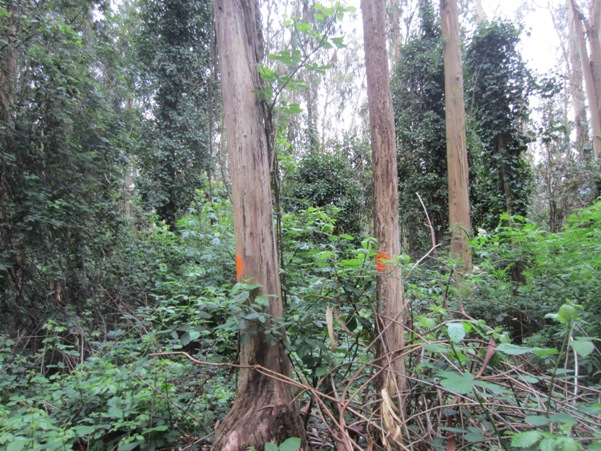 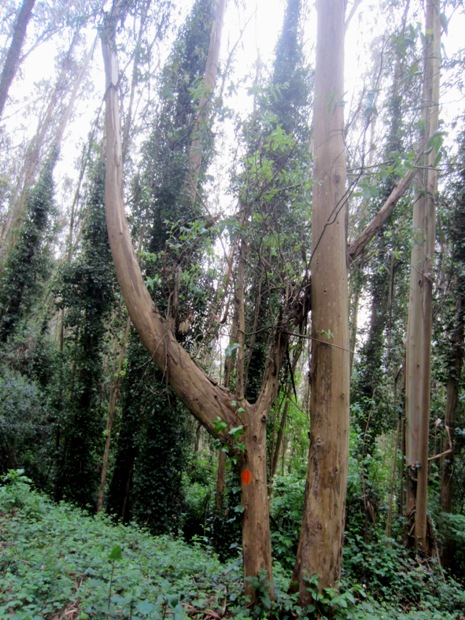 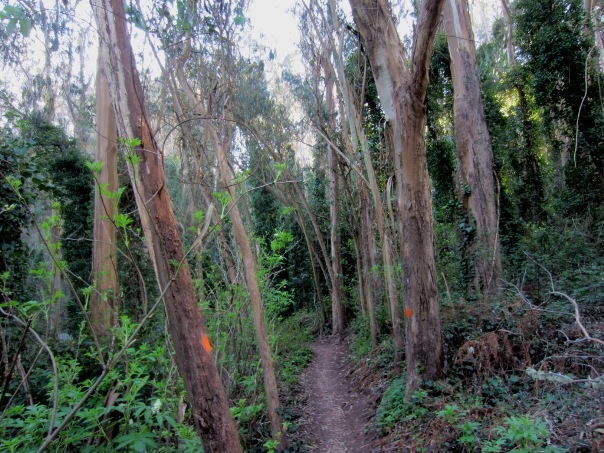 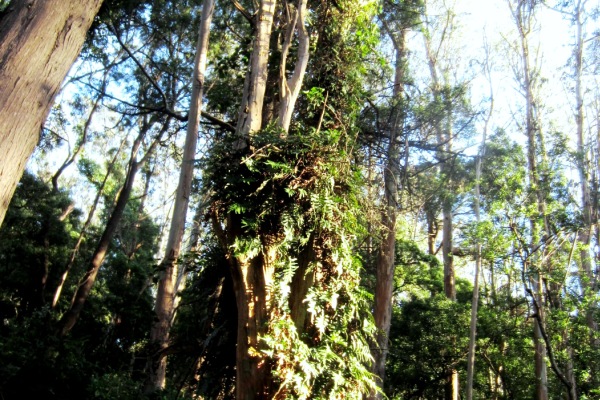 We learned from UCSF later that 118 trees have already been felled, and another 63 will be taken down in the next few weeks. It’s still the nesting season until September.

Here are a few of the 118 tree stumps and logs… 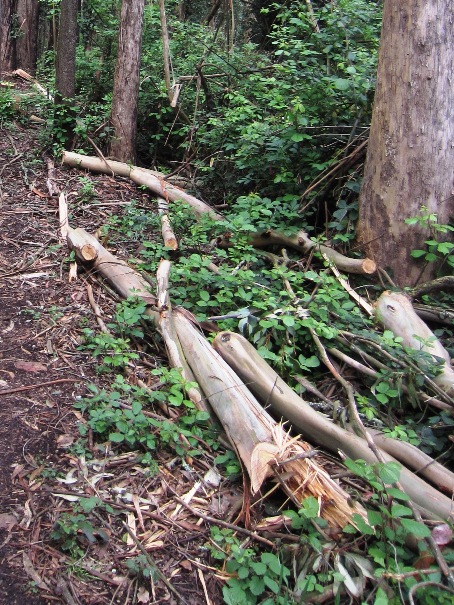 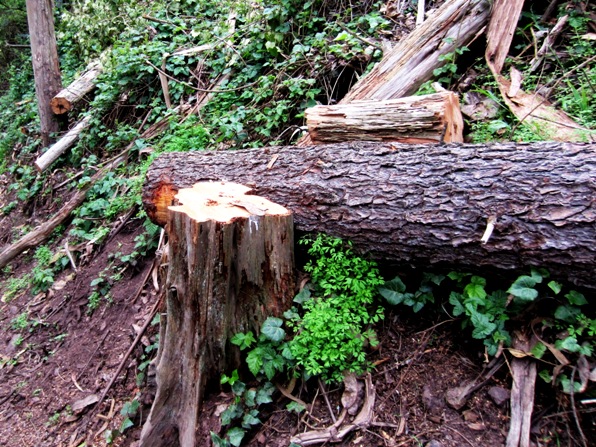 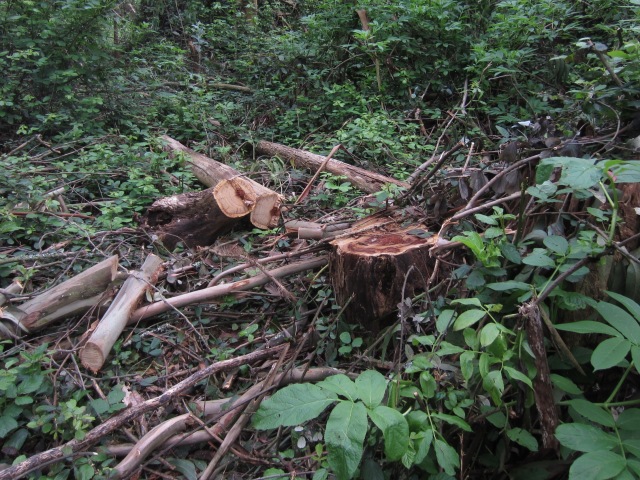 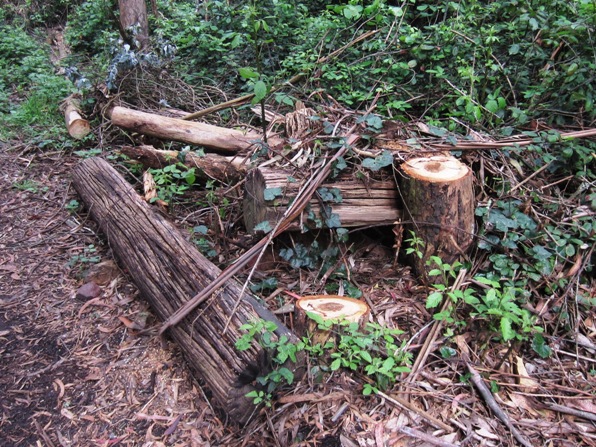 The beautiful fern garden was among the casualties – here it is on the ground: 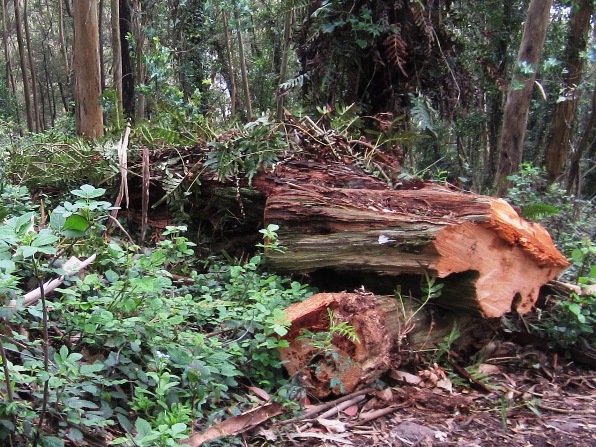 These chips were trees. 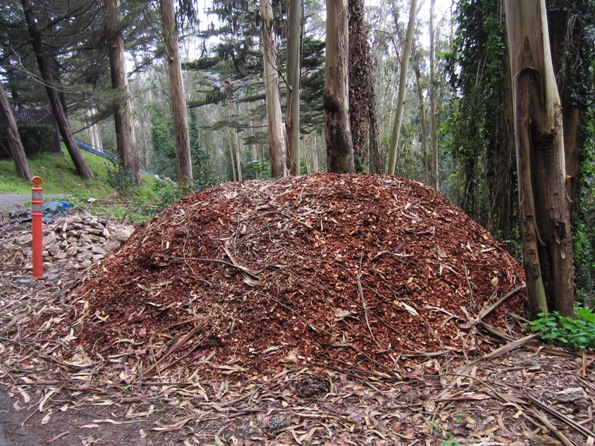 WHY WE OPPOSE REMOVING THESE TREES

We oppose the removal of these trees – except those that are actual hazards – even though they are “dead or dying.” Snags (standing dead trees) are important as habitat, providing for other plant and animal species. They accumulate ferns, and other epiphytes, and provide food for insects that in turn are food for birds. The snag below is an example – it’s clearly been a hunting ground for woodpeckers or other birds. They add to the visual beauty and character of the naturalized forest. 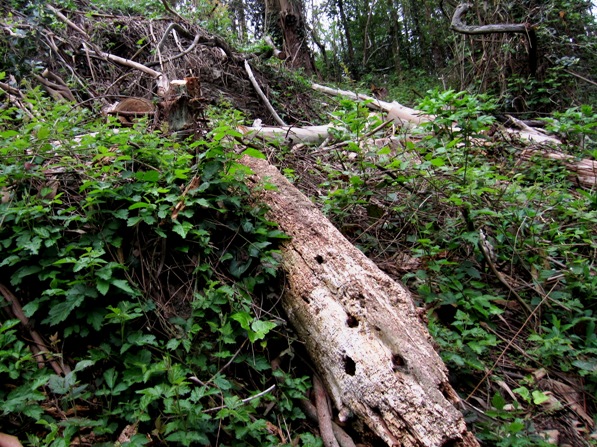 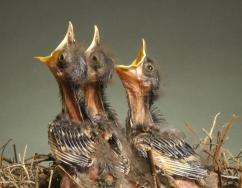 We especially object to their removal during the nesting season. We have to say we’re dismayed. UCSF has always explicitly respected the nesting season in its plans, and have avoided actions that might disturb birds’ nest or destroy them. Spotting nests is never easy, especially song-bird nests. They have to be concealed if they’re to survive predators. Tree companies are not specialists in bird behavior. Wildlife rehabilitators frequently have baby birds and animals brought to them when trees are felled or pruned in the nesting season: HERE’s a page from Wildcare, a Marin-based rehabilitator that’s headed “Stop! Don’t Prune Those Trees!”

We know that birds do nest in Sutro Forest. What we don’t know is how much damage this action in the nesting season has done. 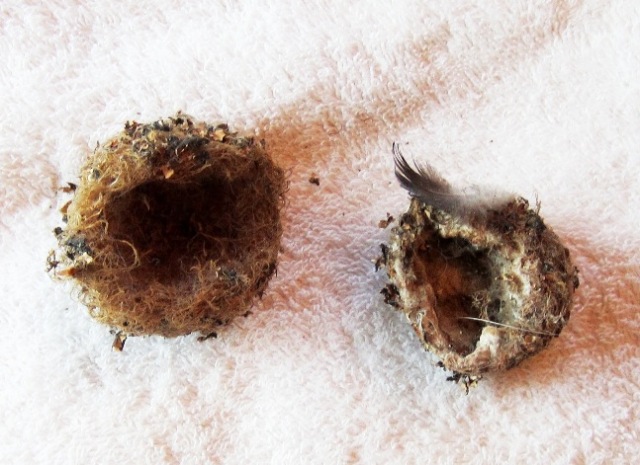 4 Responses to Felling Orange-dot Trees in the Nesting Season