The welcome little storm that passed through a few days ago watered the forest, but it wasn’t actually raining on February 13th. So when someone emailed us to say they wanted to see the forest – for the first time – they could hardly have picked a better day for a hike. (If you’re interested in hiking on Mount Sutro – we have pointers HERE.)

Though the Stanyan Street trail head (two houses above the intersection with 17th Avenue) is marked by a wooden staircase and a map, it’s still easy to miss.

“It looks like someone’s back yard” commented one observer who went right past it. But it’s  still a convenient entrance to the forest for drivers. There’s 2-hour street parking on Stanyan until 5 p.m. 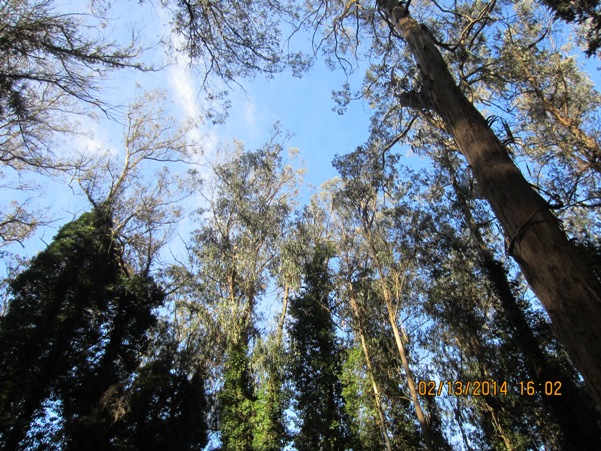 We entered a  forest fragrant with eucalyptus. My companions paused just to breathe it in. “It smells so amazing!”

A damp trail led past a stand of plum trees, still blooming prettily. 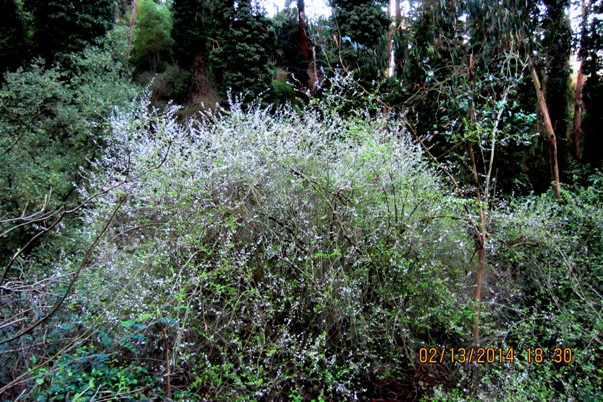 Several  joggers came by, and people walking enthusiastic dogs who were delighted by the multifarious smells of the forest.

Generally, they were courteous and careful.  One slowed almost to a stop at a slushy spot. “I want to be careful not to splash you,” he said as he negotiated the mud. We wished him a good ride.

WHY DID THE BANANA SLUG CROSS THE ROAD?

The damp trail conditions encouraged this little critter to cross the trail. We watched as it made its sluggish way, a plum petal stuck to its butt.

My companion was concerned. “We should rescue it,” she said. 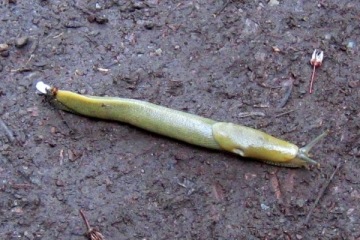 She was right. One fast mountain bike, and it would be roadkill. So we carefully picked it up with a stick, and deposited it in the greenery on the other side of the trail. “It fell upside down,” she said. “Do you think it can right itself?”

We thought it could. Banana slugs seem pretty flexible.

Everywhere along the trail, we saw trees festooned in the brown skeletons of dead ivy. The vines, thick as a human wrist, had been cut through and left to die. The fear is that the ivy kills the trees, but according to Jim Clark of Hort Science, there’s no evidence that it does. Vines can hurt trees in three ways; by covering their canopies, so they don’t get enough light for photosynthesis; by girdling the trees by twisting tightly around it; and by increasing its vulnerability to the wind through the “sail effect.”

In fact, Jim Clark says, the ivy doesn’t get into the canopy of the trees; and that’s borne out by what we’ve seen in the forest. The ivy gets up the column of the tree, and it stops and flowers – providing excellent habitat and food supply to insects and birds. It also doesn’t circle the tree; it tends to travel straight up as is evident from the picture above. And in forest conditions, it actually helps slow the wind, and so all the ivy-bearing trees protect each other. 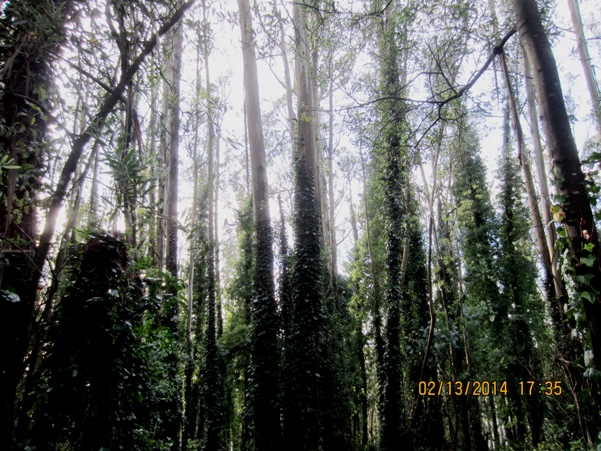 We’ve also heard people argue that the sheer weight of the vegetation could pull down the tree. In fact, by growing all the way up the trunk, it more likely acts to stabilize the tree by lowering its center of gravity and providing hawser-like support structures. Some trees do fall in the forest, as they occasionally – but they are not usually the ivy-covered ones.

THE FAIRY GATES TRAIL TO THE CHANCELLOR’S HOUSE

We took the Fairy Gates trail because the visitors wanted to see the Chancellor’s residence. It’s a wonderful house, with a view over to Marin and the Golden Gate Bridge in front, and the forest at its back. The best of all possible worlds.

The Fairy Gates trail, though, is sadly exposed by the “Urgent Fire Safety” understory and tree removal in August. Before, the trail appeared to follow a secluded mountainside, with a sharp drop-off to a valley below. But with the bushes that hid it cut down, the traffic on Medical Center Way and the buildings at Aldea are visible and it’s obviously just following the road . The magical name seems less appropriate.

We paused briefly to admire the redwood trees growing next to the house, then took the East Ridge trail up the mountain. That area, too, is denuded and brown; it’s an unhappy contrast with the lush greenery that hid the trail only a couple of years ago.

But as we climbed up, the forest became more green. 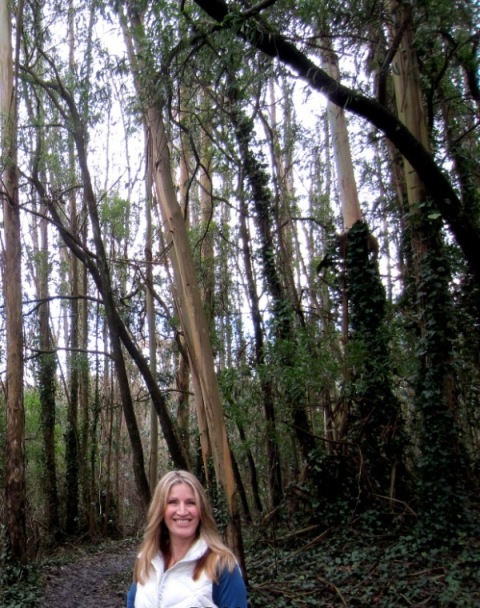 Then again there was a denuded area around the now very visible water-tank that used to be quite hidden.

The trail brought us into the native plant garden. 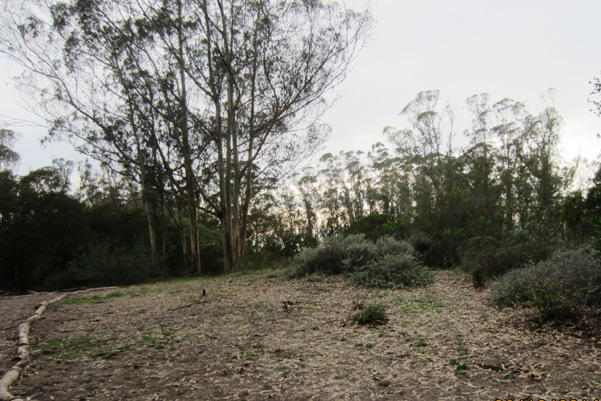 The meadow section was mostly brown, though the replanted field was better: green grass and some promising poppies and sticky monkey flower plants – and the perpetual crop of orange flags. 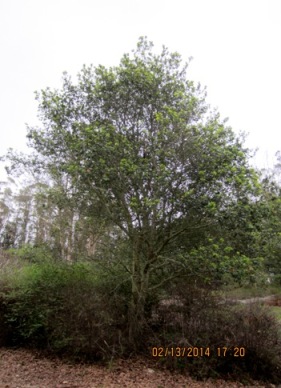 The oak tree, though still small compared to the eucalyptus that surround the garden and protect it from the wind, is growing. The garden has matured enough to provide  habitat.

It was pleasant to sit on the stone bench and hear birds in the surrounding eucalyptus, acacia, blackberry and ivy – and also in the garden itself, including in the oak tree.

The pink-flowering currant was also blooming. This shrub’s attractive and delicate flowers don’t last very long. This would be a good time to see it.

We continued down the mountain into some of the loveliest parts of the forest.

The forest had a lot of birds – more than we’ve heard in some time.

A hummingbird flew down and posed on a bush right in front of us, but was off again by the time we could focus. We think it was an Anna’s hummingbird, but it’s hard to tell from this picture. Point-and-shoot cameras don’t do good bird photography.

As we rounded the bend of the Historic Trail, we could see the fog rolling in through the Golden Gate. 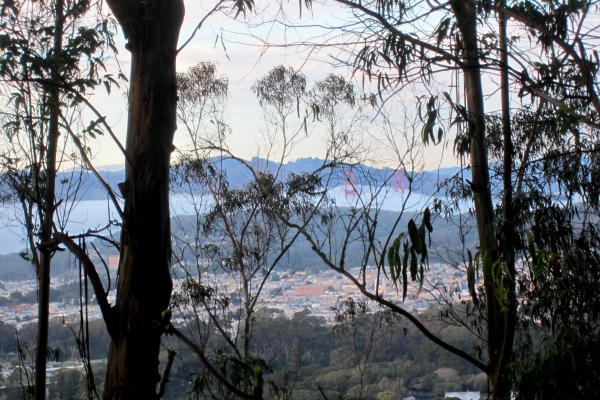 A golden light lit the trees and threw them into silhouettes.

It was time to head back from a wonderful experience of the forest for a couple of first-time visitors.

We went down the staircase into the street. The visitors looked a little stunned. “And just like that,” one said, “We’re back in the city.”