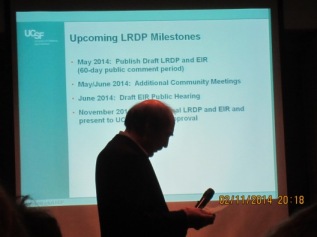 UCSF had called this meeting to discuss, not Mount Sutro Forest, but their Long Range Development Plan. However, Craig Dawson, Executive Director of the Sutro Stewards sent out a call for people to attend and talk about Mt Sutro, apparently to push UCSF to revert to the previous plan.

We therefore asked people who support the forest also to attend to counter attempts to turn the Plan backward. While we oppose the felling of thousands of trees in the New Plan, we think it’s progress compared to the Previous Plan that was much worse.

In February 2013, UCSF published a Draft Environmental Impact Report (DEIR) that embodied a plan to cut down tens of thousands of trees in two phases, with the possibility of using large amounts of toxic herbicides to prevent regrowth. In Phase I, they would cut down 80-90% of  trees on 7.5 acres (about 5,000), remove all the understory, and amputate vines at 10 feet off the ground so they died. In Phase II, they would extend the same management plan to cover 3/4 of the Mount Sutro Open Space Reserve, doing one-quarter (10-12 acres) at a time. This implied that 90% of the trees on 3/4 of the forest would be gone in 4-5 years – and large amounts of toxic herbicides would be used in an area which has seen no herbicides since 2008.

In November 2013, in response to the public comments on the DEIR, UCSF announced a New Plan. It would commit to not using herbicides at all in Sutro Forest. It would simplify its multiple objectives in the Previous Plan down to a single one: Safety. And as a safety measure, it would cut down trees up to 10 inches in diameter on about half the forest all at one time.

The four affected areas are shown on the map below: (1) The South side – in purple (2) the strip on either side of Medical Center Way (3) The orange area on the West side, and (4) the blue area on the North side (behind Edgewood).

We consider the new Plan to be progress over the horrendous Previous Plan, though still destructive of trees and habitat. Our post about that is HERE. 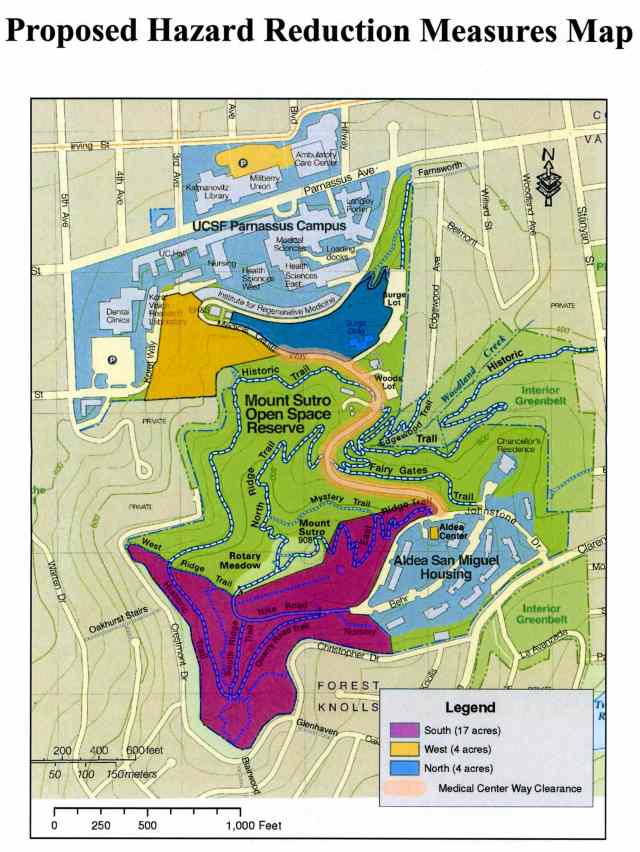 THEMES OF THE COMMENTS

UCSF noted that while this meeting was not about Mt Sutro, they would accept comments about  the forest.  After the presentation (which focused entirely on the LRDP) it was comments time. A few people spoke to the LRDP issues; but many more spoke about the forest.

Some of the themes:

1. Let down? The Sutro Stewards and their supporters felt UCSF had let them down with the New Plan. However, others felt that UCSF was actually listening to other views for the first time.

2. Forest needs management? They also emphasized that the forest “a plantation” required management and was dry, not a “rain forest.” Others want the forest to remain natural, with only enough management to keep the trails open and remediate hazards.

3. Previous Plan – Better or Worse? The Sutro Stewards supporters spoke about the previous plan as a gradual one, with little loss of trees or vegetation.  However, we pointed out this was not actually in the Plan as embodied in the Feb 2013 DEIR.  What that Previous Plan would have done was the same thing as the New Plan, only on more land, over 4 years, and with added toxic herbicides.

4.  UCSF thanked for eschewing herbicides. Supporters of the forest expressed gratitude to UCSF for its commitment not to use toxic herbicides in the forest. One Stewards supporter also said he did not want pesticides used.

5.  Opposed to Tree-cutting and Forest-gutting.  The Stewards’ supporters were quite eloquent about how awful the forest would look with its understory gone on 25 acres, and all the trees under 10 inches cut down, and how it would destroy habitat. Forest supporters agreed on this, and asked UCSF to revisit the Plan. They spoke of the beauty of the forest, the importance of every tree in a time of climate change

There seemed to be broad agreement that the commitment not to use pesticides was good; and that thousands of  trees should not be cut down, nor the understory removed.

Since the objective is now limited to Safety, the question is whether the planned actions would make the forest more safe. We do not think it will; in fact, by destroying the understory and weakening the remaining trees, it could increase the risk.

NEW INFORMATION ABOUT THE FOREST

1) Important Timeline Change: The revised DEIR will come out in March 2014 (not February), and a Sutro Forest public meeting will be held in April 2014 (not March).

2) The revised DEIR will not incorporate the Previous Plan as one of the alternatives. It will be only look at the Environmental Impacts of the New Plan.

3)  We learned that Sutro Forest is independent of the LRDP. However, there are some things the LRDP covers  that will affect the forest: