The public comment period for the Mount Sutro Draft Environmental Impact Report (DEIR) closed on March 19th. A lot of people are saying, Now What?

The bottom line: Unless the project is delayed or cancelled, tree-felling could start in mid-August 2013. The time to work on saving this forest is NOW. [Edited to Add: It’s been postponed to mid-August 2014. See One More Year for Sutro Forest.]

These are the next steps for UCSF before it can start cutting:

1. Respond to Comments. UCSF needs to respond to all the comments people have sent in. We asked how long this would take. UCSF’s Barbara Bagot-Lopez says they estimate it will take about 2 months. That brings us to around the middle or end of May, 2013. [Edited to Add: There were so many comments, and they were so substantive, that UCSF needs more time to respond. This will carry them past the “window” after the nesting season and before the rains, hence the postponement for another year.]

2. Certify the EIR. After they respond to the comments, the University of California Board of Regents has to certify the final Environmental Impact Report (EIR). Usually, that’s just a compilation of the DEIR, plus the comments, plus UCSF’s response to the comments. What certifying the EIR means is that the UC Regents accept that the document properly sets out the environmental impacts resulting from the project, and that the objections and comments have been answered. Then UCSF would prepare and file a Notice of Determination with the State Clearinghouse. We don’t know when this would take place, but since the Regents can delegate their authority to anyone they choose, it could happen immediately after the final EIR. They wouldn’t have to wait for a meeting of the Board.

3. Approve the Project. Once the EIR has been certified, the Regents would decide whether to approve the project. (They could also approve the No-project alternative, or the Reduced Project alternative. We wrote about those HERE.) We have heard – we don’t know how accurate this is – that the Regents generally support whatever decision the UCSF Chancellor makes. If so, it would depend on what Chancellor Susan Desmond-Hellman wants to do.

THE LOGISTICS OF LOGGING

Once the approval is in place, work on the first stage of the project – the Demonstration areas – can start. However, UCSF has said it will avoid working during the bird nesting season (approximately Feb 15-Aug 15).  So we presume the tree-felling can start any time after Aug 15th, and finish by mid- or end-September. 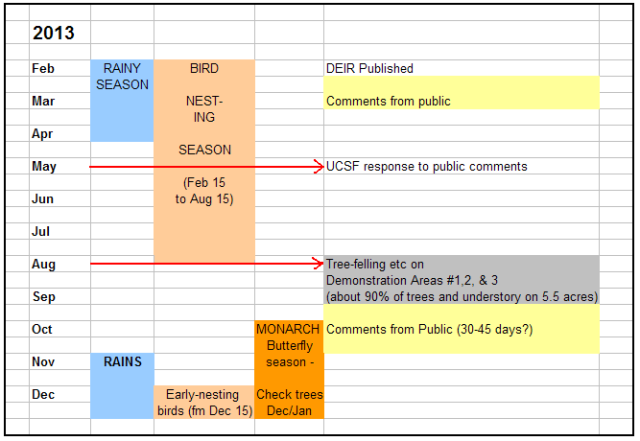 1.  The Demonstration Projects may take about a month.  The DEIR says that one “Brontosaurus” machine will be used at a time, and that it should take 2-10 days to finish work on a “Demonstration” area. We expect that work on Demonstration areas #1, #2, and #3 (totaling 5.5 acres) will be done in about 30-45 days, finishing by end-September 2013.  This will involve cutting down about 3,000 trees (our estimate), mowing down 90% of the understory, and cutting off vines to 10 feet above the ground.

2.  UCSF will ask for feedback from the public on the “demonstration” plots. We expect they will have a period of around 30-45 days for this feedback. (We’ll update this if we get more information.) This will take it into November, when the rains usually start; and we think the next stage will only take place the following year.

If, however, they do decide to work later in the year, they will call in a butterfly expert (possibly Liam O’Brien, who has consulted for SF Recreation and Parks Department on butterfly issues) to inspect the trees in December or January to avoid cutting down a tree where Monarch Butterflies are currently wintering.

Year Two (2014). In year two, probably in the late August/ September 2014 window between birds’ nesting and rainy weather, they will complete the Demonstration projects by felling nearly all the trees on Demonstration Area #4, and planting native plants – what the DEIR calls “conversion planting.” (They are spacing the trees in Area #4 about 60 feet apart, which would leave some 20-30 trees on the site instead of around 1500 now.)

In the same year, they may start work on the second stage. That would be where they extend the same management plan – 30-foot spacing, mowing down the understory, cutting the vines – to a total of 38.5 more acres. Since the DEIR says that no more than 15 acres will be done at any given time, they will probably do about 10-13 acres.

This is also the year when they decide on pesticide use. In Year 1, only one acre will be sprayed with pesticides (Aquamaster, i.e. Glyphosate; and Garlon 4 Ultra, i.e. Triclopyr). They will  compare this for effectiveness and expense with two other acres, where they’ll prevent  regrowth by tarping, or by manual removal (or maybe goats). We have heard that the Sutro Stewards’ Executive Director Craig Dawson thinks pesticides will be necessary. So we think it is probable that pesticides will be used more widely in the forest in the second year to get rid of “non-native species” – which includes most of the forest.

Though the DEIR says that no more than 15 acres will be worked on at “any given time” (and not “in any given year”) the section on herbicide use suggests that they expect to stagger the project over 4 years, doing a quarter each year. So we expect that the project would be completed by end-2016. After that, pesticide use would continue for another 6 years.  Pesticides would also be used for maintenance along the trails and in all the Native Gardens (of which there will be several).

This is a little ironic, since the SF RPD’s Native Areas Program has agreed not to use pesticides for 15 feet on either side of trails to reduce  risk to people and pets. UCSF would be going from the safest wildland in the city in terms of chemical use, to the worst.

WHAT COULD IMPACT THIS TIMELINE

This timeline is an estimate we’ve made from the information in the DEIR. A number of factors could delay it, or compress the times.

1. The whole project could be delayed by a year if UCSF needs more time to respond to comments, and does not certify the final EIR before the tree-felling window in the Fall.

It could also be delayed – or even cancelled – if the UC Regents (or the UCSF Chancellor) decide to wait on this certification , or on the approval of the project.

2. It could also be delayed by any funding constraints.

3.  The project time-line could be compressed if the winter is dry and there is time – and funds – to start the second stage of the project immediately after the public comment period on the Demonstration Projects closes. This could bring the project forward by a year, so all the tree-felling is done by 2015 instead of 2016. Any other dry years where two sections of work could be done in the same year would also have this effect. In 2013, SF RPD were felling trees in Glen Canyon Park through January; under similar conditions, UCSF may decide to do the same.

WHAT YOU CAN DO

Here’s what you can do to help save this magnificent forest:

If you have not written to the UCSF Chancellor, Susan Desmond-Hellman, or to the Board of Regents, this is a good time to do so. Also, if you have not signed the petition, please do so HERE!

1. Write to the Board of Regents of the University of California, and ask why a premier medical institution is engaging in a controversial, expensive, and environmentally destructive project.

They can be contacted at their website HERE. Their address is:

Their email address is: regentsoffice@ucop.edu

2. Write to Susan Desmond-Hellman, Chancellor of the University of California San Francisco, asking her the same thing. Here’s her address:

3. Subscribe to this site to keep updated. (see the box on the top right)

4. “Like” our Facebook page Send us your contact (email) stating your support, your particular issues with what is going on, and if you would like to help by being part of our “critical mass” of supporters.

5. Help us get the word out! Distribute this two-page flyer by email, or by printing it out and handing it to people, or putting it up in public places that permit it – for instances, shop windows. Here’s the latest flyer: Mount Sutro Forest Flyer April 2013

6. Let us know if you would like to help in other ways, such as contacting supervisors and other government officials, giving talks, or give us your own ideas for helping out.