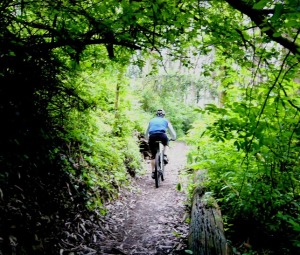 We’ve written about bike riders on the mountain before, and our experience has been pleasant. The riders have been careful and polite. [Read: Courtesy on the Mountain]

Others have told us about cyclists zipping down trails and getting in the way of joggers and hikers. We’d never encountered one.

We were checking out the Non-EIR trail, the new trail from the South Ridge to the Nike Rd that seems to have been built without the EIR being certified. Suddenly, a voice behind called something. It may have been “Coming through” or words to that effect. I moved, and called a warning to my companion, who moved out just in time.  “I’m coming back the same way,” called the rider as he passed.

And he did, mere minutes later, at speed. My companion dodged him again.

“I said I was coming back this way! Maybe you didn’t hear me.”

Huh what? Did he expect we’d stand by the side of the trail until he returned? “Bicycles are supposed to yield to pedestrians,” we said.

The man bridled. “We built this trail!” he said, sounding entitled. “The mountain bikers did most of the work.” (The Sutro Stewards draw a lot of their volunteers from the SF Urban Riders.) “The person going downhill is supposed to yield to uphill traffic,” the rider added. “Of course I go uphill really fast.” And in both directions, apparently, because he hadn’t yielded coming or going. “Besides, I haven’t ever hit anyone.”

“Good, keep it that way,” we suggested, thinking of three Bay Area rider-caused deaths in the last twelve months. 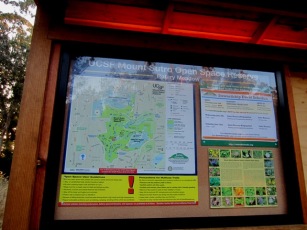 Next to the small oak tree in the center of the garden, a huge new notice board has various postings from the Sutro Stewards: a map, a set of rules (including “Cyclists yield to all other users“) and a schedule for volunteers.

(Could we use this notice board to communicate with visitors to the forest? Unlikely. Access to the Notice Board is controlled by UCSF’s Community and Government Relations Group.)

Later, as we continued our hike through the forest, another rider came along.  We moved out of the way. (As we usually do. We understand momentum.) He politely thanked us as he rode by carefully. “That’s more like it,” said my companion.

That’s more the norm, too, thankfully. As if to prove the point, another couple of riders came by, and would have stopped for us if we hadn’t stopped for them first. They thanked us too. (It seemed like Bike Day in the Woods, this evening; we saw quite a number of riders.) 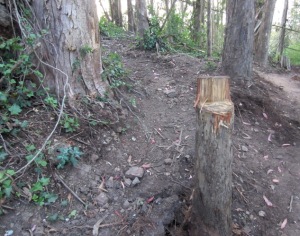 The forest trails are dry right now, especially where the understory has been removed or thinned – which is in a lot of places. Just above the Aldea campus, the Stewards are realigning the trail. It’s not clear why exactly it needed it, but the area is stripped and dusty.

(We’re thankful we got to see the forest as it was back in 2009, mysterious, dense, and criss-crossed with narrow trails. It’s lovely now, but then it was transcendent. And though there were riders, the narrow trails made everyone more careful.) 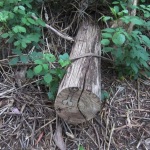 We were amused by the first graffiti we’ve seen (except tags on a sign). This was an anatomical illustration on a cut log on the South Ridge. 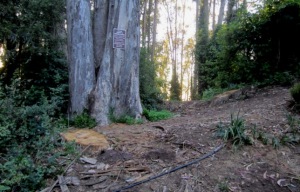 On the Nike Road, up toward the native garden, 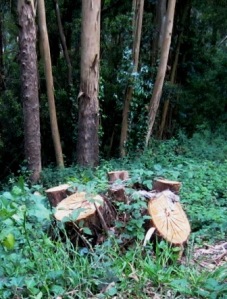 some trees have been cut down. The stumps are still raw.

Much of the Native Garden is really dry and my companion was not favorably impressed. “This looks like garbage!” he commented. The newly-planted meadow is covered in long brown grass and small plastic flags, with some poppies in between. The Sutro Stewards replanted this last year with a $6,000 grant. 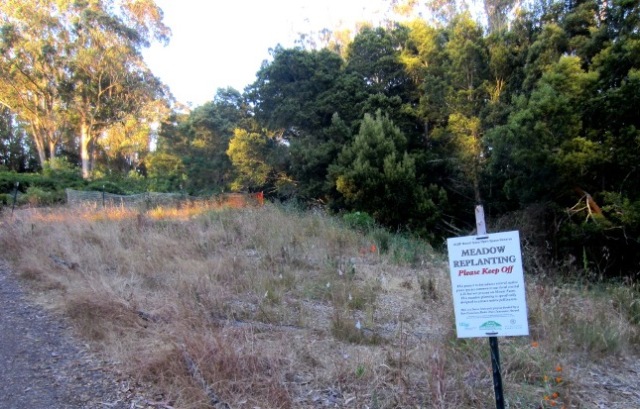 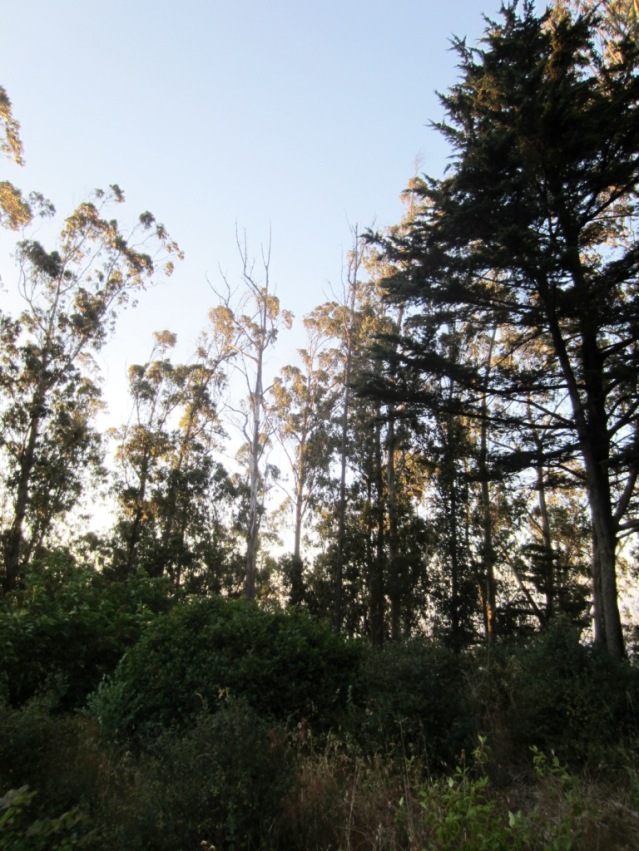 But at least the shrubbery areas are green. The golden lupine is blooming, and some of the shrubs are now quite tall.

“This is much better,” he said. It did indeed look garden-like, a great improvement over the scraggy grass. 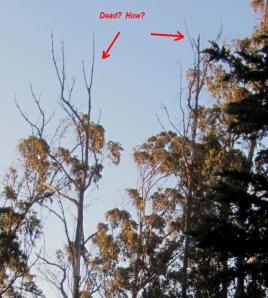 On the other side of the garden, we saw two suspiciously dead eucalyptus trees on the slope below. Wonder what killed them? [Edited to Add: Someone who climbed down and got a closer look thought they had been girdled. There were also a number of tree stumps in the vicinity.]

We went down to the Aldea Campus and the Fairy Gates Trail.

It’s full of nasturtiums, and they’re brilliant. We ended our walk amid flowers so bright that they seemed almost to be glowing from within in the evening light. 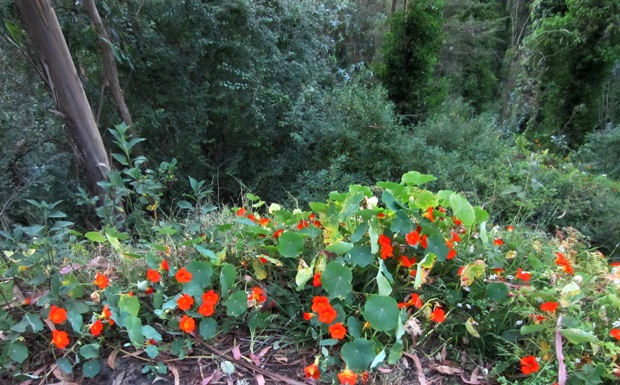 6 Responses to Sutro Forest: A Tale of Two Riders