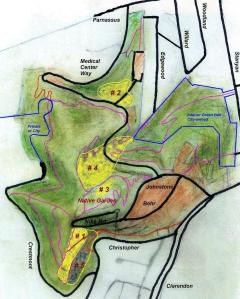 At a public meeting of the Community Advisory Group on 4 June 2012,  UCSF’s Barbara Bagot-Lopez announced that the project to fell trees on four “demonstration”plots would be postponed, probably to the Fall of 2013. (Those are the yellow areas on the map here; you can click on the map for a larger version.)  Before, it was scheduled for Fall of 2012, which had been pushed back from 2011 and earlier, 2009.

(A summary of the proposed project is here.)

An Environmental Impact Study is under way. Because of the number of issues raised at the scoping meetings last year, more time will be needed to investigate them.

WHY IN THE FALL?

UCSF is careful about the timing of these projects, which would have a major impact on the forest and surrounding areas. They cannot be done in winter wet season, November through April; and they will avoid the bird breeding season from March to July. (The forest is also very wet through the summer, since it is effectively a cloud forest drawing moisture from the summer marine layer.)

Thus, the only feasible time to start is in the Fall. So it would seem the project is likely to be shifted to Fall 2013.

Right now, a wind study is in progress on the mountain, with anemometers in various locations. We are pleased UCSF is doing this study, especially since it had initially decided not to examine the effects of wind.

(See related article: What UCSF’s Environmental Impact Report will Evaluate – and What it Won’t )

But we would like to note that this area gets the most wind and storms during the winter rainy season. We think those wind studies would be critical, especially in evaluating wind-throw (i.e., trees being knocked down by the wind) and the impact on surrounding neighborhoods. We have suggested this to UCSF.

UCSF has kicked off its discussions for its Long Range Development Plan (LRDP) which will cover the period 2015-2030. This includes all its campuses: Parnassus, Mount Zion, and Mission Bay, as well as smaller areas like Laurel Heights and Bayview/ Hunters  Point.

No specific plans were discussed for Sutro Forest at this meeting. The main issues centered around the Space Ceiling, a 1976 restriction on UCSF expanding beyond a certain square footage on the Parnassus campus. It was imposed as a result of  a huge battle between the neighbors and UCSF, which had major expansion plans that would have impacted the whole neighborhood. But in fact, UCSF has exceeded this ceiling for years. When the new Stem Cell Research Building was erected, UCSF was going to tear down seismically unsafe UC Hall to compensate; but current plans are to renovate and repurpose the building.

Moffit Hospital will need to be replaced; and some smaller buildings torn down (including a couple in the forest, in the Woods parking lot and the Surge parking lot).

In making the LRDP, UCSF has sought input from its Community Advisory Group (CAG), which consists of appointees by the Chancellor. This splits separately into informal “Action Teams” for each area, comprising people from the CAG who live around each area.  For Parnassus, the members appear to include Craig Dawson, Kevin Hart, Dennis Antenore, Beatrice Laws, Susan Maerki, and Dave Parrish. (If there are others, it wasn’t clear who since UCSF did not have the names available. Should we get updates, we will edit them in.

Edited To Add: We found a list online; if it is current, these are the Parnassus members. )

The Parnassus CAG team clearly cannot represent our views regarding the forest. At least four of the six (excluding Susan Maerki and possibly Kevin Hart) have spoken strongly in favor of the UCSF plan for the destruction of thousands of trees on Mount Sutro; and moreover, Craig Dawson is the Executive Director of the Sutro Stewards that “work closely with the UCSF Facilities Management department” and have advocated for the plan. Dave Parrish is a member of the same organization.

However, on the simplest criterion we do seem to have agreement: To preserve the Open Space Reserve in which Mount Sutro Cloud Forest exists.

(Apparently, there was some consideration, at one time, of building within it.)