We’d thought, after FEMA’s  letter that suggested that UCSF’s application had exaggerated the fire hazard in Mount Sutro Forest, that UCSF would back off an assessment clearly based on misunderstood and misinterpreted information. After all, Cal Fire has declared the fire hazard “moderate” – its lowest rating.

(For those new to the background: UCSF attempted to get a FEMA – Federal Emergency Management Agency – grant on the same basis in 2008/ 2009.  FEMA had many questions about the veracity of the claim and UCSF withdrew that application. That story, and an excerpt from the FEMA letter obtained under the Freedom of Information Act, FOIA, are here: “The Fire Hazard that Wasn’t.”)

We were wrong. A few months ago, UCSF applied — with support from the Sutro Stewards — for a grant of $75,000 from the California Fire Safe Council.

And it’s again raising the spectre of acute fire danger in what may be the wettest place in San Francisco that’s not actually under water.

The application starts with a reference to the East Bay: 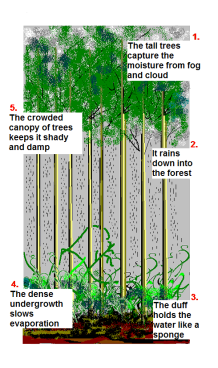 This forest lies completely within San Francisco’s fog belt, which makes this century-old dense forest functionally a cloud forest. In addition to the rainfall, it gets 33% more moisture from harvesting fog all through the summer.  As a result, it is damp or wet year round.  When we kept a “fog log” in 2009, a dry year, we found the longest “dry spell” for the forest (i.e., no fog, no rain) was seven days. At no time did the forest dry out at all.

The planned actions — thinning the forest  and removing undergrowth — will actually *increase* the fire hazard by opening up the cloud forest and causing it to dry out. At present, the forest is always damp and often wet, even when there has been no rain.

NOT AN UNHEALTHY FOREST

The application insists that the forest is unhealthy, and infested with dangerous pests, including the “newly detected eucalyptus snout beetle.”

In fact, when we asked a certified arborist to examine the forest, they found it healthy. We published the relevant excerpt here. The number of dead and dying trees are normal for a naturalized forest. This is a forest, not a garden. The “snags” or standing dead trees are also critical as habitat elements for birds, especially woodpeckers and flickers, and the insects on which they feed. Because the forest is damp year-round, they do not become a fire hazard.

A certain level of insect activity is also normal in a naturalized forest. They’re part of the food chain. And as for the particularly-mentioned Snout Beetle?

The Snout Beetle is largely found in southern California, and has been effectively controlled with a parasitic wasp deliberately released. According to the University of California’s website, California Agriculture Online,

“Consequently, where pesticide use has not disrupted the actions of the parasitoid, there have not been further reports of damage, and the biological control program has provided an effective and permanent solution to the problem, requiring no further input.”

Mount Sutro Forest has been free of pesticide use for several years.

ARE THE TRAILS A FIRE HAZARD?

We thought this issue had been addressed at the hearings about the new trail that opened last year. Neighbors were very concerned that the trails would increase the fire hazard by increasing ignition risk. Ray Moritz, a forester, described the fire hazard as “mild” and described his experiments to demonstrate that ignition risk was low. (We published a report of that meeting, based on contemporaneous notes. Craig Dawson, Executive Director of the Sutro Stewards who has signed a letter of support for this UCSF application, was present at that meeting.)

So we were surprised to find this statement in the application:

It’s exactly what neighbors were assured was not the case. Mr Moritz also pointed out that the “window” — periods of “low humidity and high temperature” were small in San Francisco. And in fact, given the cloud forest conditions with summer fog, it’s even smaller in this forest.

CALLING FIRE IN A CROWDED NEIGHBORHOOD

Here’s why we’re dismayed by this effort to raise funds with a purported fire danger:

1. The proposed actions can actually increase the fire hazard by opening the forest and drying it out. Plans to amputate vines to ten feet above the ground will leave trees full of drying and flammable leaves and twining stems. And plans to leave the chipped and fallen trees and logs in the forest will only increase the fuel.

2. The forest is surrounded by residential neighborhoods. Aside from unnecessarily frightening the residents, the purported fire hazard can become an issue both for insurance and for disclosure at the time of sale of homes in these neighborhoods — even if it’s not true.

3. If the fund-raising succeeds, it diverts funds from other areas where they would actually reduce fire risk, not increase it.

2 Responses to USCF, Sutro Stewards, and the fund-raising “Fire Hazard”