Excerpts from the Arborists’ Report

As we said in an earlier post, we asked two arborists to look at the Mount Sutro Forest and give us a report. Jocelyn Cohen, a Certified Arborist, holds a seat on the Urban Forest Council for the City of San Francisco. Alma Hecht is an arborist with  a Masters of Arts in Landscape Design. [ETA: She is also a Certified Arborist, having recertified recently.] 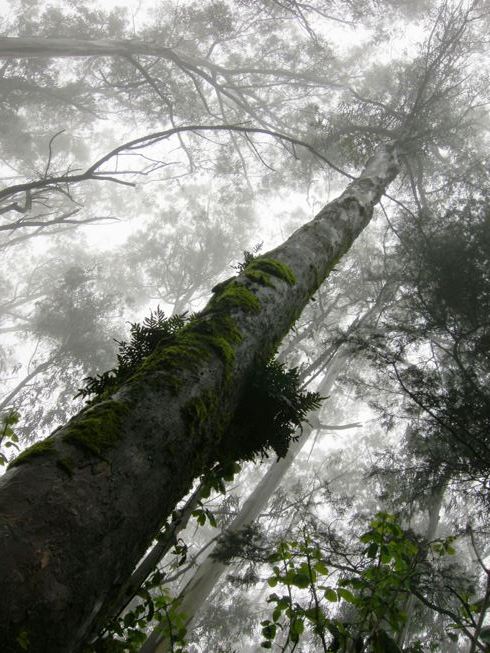 Their observations certainly suggested no cause for alarm about the forest’s current health and stability (though they were unimpressed by some of the management efforts).

They also noted that the forest in Mount Sutro Open Space Reserve “has the characteristics of a fog or cloud forest.”

“As is typical in [such] forests, trees are crowded. Branching is high. Understory is deep. Leaves drip.  Some trees are mature and mighty with crowns beyond view. Others are rangy, young and low enough to meet eye-levels.

“‘In forest stands or in other mixed plantings, all trees do not grow at the same rate. Over time certain individuals dominate over others.’ Arboriculture: Integrated Management of Trees Shrubs and Vines, Richard Harris, Greg Steinke, James Clark and Nelda Matheny, Prentice Hall 2003.”

They also observed the drying out of the forest in areas where it’s been opened up.

“In some areas with indiscriminate thinning and removal of trees, the ground is dry (compared with wet conditions through most of the forest and even on the same trail). Those areas also seem to have higher wind velocities. Dry conditions are particularly noticeable at the Rotary Meadow where an existing clearing was replanted into a landscape of native plants.  Significant differences in moisture conditions are visible.”

We told them that someone had called the forest on the South/ West Ridge a “dog-hair forest.” They didn’t agree.

“Reference to certain areas of the Mount Sutro Open Space Reserve with the slang forestry term “dog-hair forest” are inaccurate. It does not have more than 5,000 – 7,800 trees per acre—it average around 740 trees per acre—nor is it the result of clear-cuts or burning slash and burn practices. (“Dog-hair forests” occur naturally in regenerating lodge-pole pine forests, typically after a burn or clear-cut.)”

They noted that the forest appeared healthy, and saw signs of regeneration in forest trees including eucalyptus.

UCSF and the Mount Sutro Stewards have suggested that the forest is dying and infested with beetles. Since it’s a living eco-system, a normal amount of insect life can be expected. But there’s no evidence of a unhealthy levels of infestation, or of a moribund woodland.

1 Response to Excerpts from the Arborists’ Report