We were up in the forest this evening for a bit. Here’s what we saw:

1. The Chain link fence on Pad#4 in the Aldea campus has been erected, complete with the three gates promised (one is big enough to drive a truck through). It looks even worse than it sounds. There is no way that can be considered “Open Space” and it would take some imagination to consider that part of the Open Space Reserve, as UCSF intends.  A parking lot is more open and scenic. Unless parking lots are considered Open Space under the agreement?

The South Ridge Trail has been substantially broadened for some distance near where it connects to Nike Rd. The understory has been mown down on either side of the trail, so now it’s about 15 feet broad. You could drive a truck on it. It looks as though someone might have done just that. The understory here used to be dense bushes up to shoulder height and it was always full of birds. We hope this isn’t going to continue; it could have a severe impact on the forest ecosystem before the baseline study has been made. [ETA: More detail in this post.]

3. The signposts have been erected. So far, we haven’t seen any graffiti on them, though there’s some on the UCSF property notices in the forest . They are neat and tasteful on brown posts that blend in reasonably well. 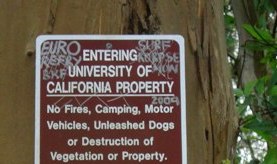