We attended a meeting at UCSF today, in which they addressed several planning items.

On Mt Sutro, UCSF was seeking money from FEMA to gut a quarter of the forest in the name of fire hazard mitigation. What UCSF’s Lori Yamaguchi  said was that FEMA told them: FEMA would want an Environmental Impact Report (EIR);   it would take two years to do one; during that time, UCSF would not be allowed to do anything on the mountain; FEMA would focus “narrowly” on hazard removal.

So they have withdrawn both applications. What UCSF plan to do next is (1) a California Environmental Quality Act review for the whole mountain, all 61 acres of it. They expect this will take one year, and involve community feedback. (2) Set up a 2-acre demonstration plot, probably on the South Ridge. (3) Then get more community feedback before moving forward. They plan to adhere to the Adaptive management principle. She said they have enough funding to do the CEQA, the demonstration plot, and the 14 acres of South Ridge and Edgewood, but not the whole 61 acres. So they are seeking other sources of funding. 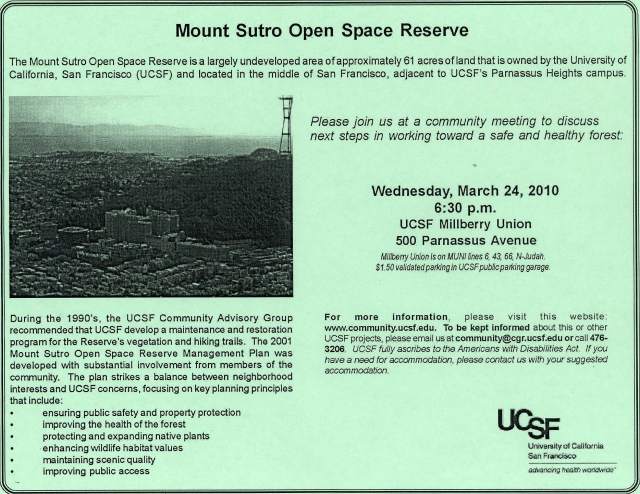 (Click on the picture above for a larger version, and again for an even bigger one.)

In other items, Kevin Beauchamp (pronounced “Bo-shawm”) presented the principles for the next Long Range Development Plan, approximately 2012-2030. One of the principles will be Environmental Sustainability and Climate Action Goals. He clarified this would include consideration of greenhouse gases.

Michael Bade made a presentation about the new Regeneration Medicine Building under construction now (aka the Stem Cell Research Building). It’s impressive. It is going to be a “ribbon” 660 feet long and 63 feet wide, running along the base of Medical Center Way (the orange building on the map below). About 250 people will work there.

However, this does highlight something  for the Edgewood neighbors to consider: The whole area below Medical Center Way is going to be built up. There’s a power plant there now. If the Edgewood Cut goes ahead, leaving only a sparse canopy and widely-spaced trees, this will remove the visual and noise-absorbing screen between the dense campus and the Edgewood neighborhood. Low-growing shrubs won’t have the same effect as 100-200 foot trees and dense thickets of blackberry and ivy. 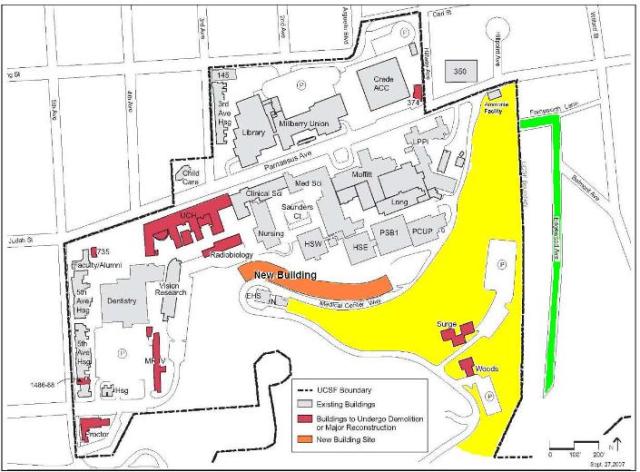