Dusk in the forest (with owls)

We walked up into the Sutro Forest on a peaceful bird-filled evening. A few outside noises drifted in. The trees were full of the tweets and trills of bird-sounds,  but the creatures themselves, evidently looking to settle in for the night, were well-hidden.  It felt even more like another world than usual. 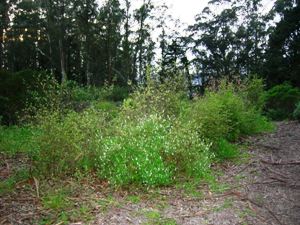 Late February in the Native Garden

After all the rain, the trails were wet, even squelchy, with occasional puddles. Small stones and gravel have been laid on some paths on the south ridge, and elsewhere it’s been mulched with what looks like eucalyptus chips.

The Native Garden was more-or-less bird-free; one may have disappeared into the bushes, not sure. But it’s blooming: pink-flowered current with pretty sprays of flowers, the tiny white bells of the manzanita, and the blunt dull-blue spikes of ceanothus. There were a few purple lupins. Also the bright sulfur-yellow of the Bermuda buttercup, still scrolled tightly against the weather.

The grass, native and non, was green instead of the dry brown we’ve seen all year. This may be as good as it gets in the Native Garden.

As we walked back into the woods,  we gradually noticed another sound behind the loud twittering of the birds and the occasional raven’s caw overhead: A soft hooting. The Great Horned Owls. 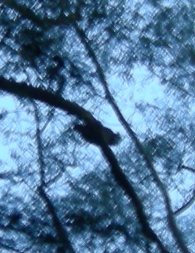 And then, along a darkening trail, we saw them: A pair, in two different trees, talking quietly to each other. A flash would have been an intrusion as lurking humans are not. So here are the flashless photos. These are the birds Nature-In-the-City wants gone. 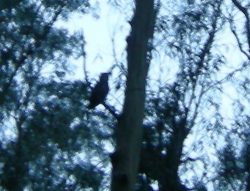 2 Responses to Dusk in the forest (with owls)