Earlier on, we posted about the use of Roundup on the Aldea campus. (We had heard reports that it was used in the Mt Sutro Cloud Forest, too; but there were contrary reports at the October 19th meeting. Until we had actual evidence, we did not post anything about it.)

Today we received an e-mail from UCSF, confirming that herbicides had been used both in the forest up to a year ago, and – as we know from a September 09 spraying notice – much more recently at the Aldea Student Housing on the mountain just below the forest.

But importantly, it says that they are halting herbicide use pending investigation of less-toxic alternatives.

“Herbicides have not been used in the Mount Sutro Open Space Reserve since 2008, and are not being used at Aldea pending an evaluation of a herbicide commonly known as “Roundup”. UCSF is evaluating Roundup as a result of recent studies on the active ingredient in Roundup and similar glyphosate-based herbicides. What these studies show is that the active ingredient in Roundup is not the toxic concern. The concern, we understand, focuses on the surfactant, which helps the solution absorb into plant material. Recent research, including proposed work in the Marin Municipal Water District watershed, shows that the active ingredient works well with corn-based surfactant. UCSF is presently looking into the effectiveness of utilizing corn-based surfactants.”

Of course, that’s not completely right. The surfactant POEA is the most immediate concern, but Glyphosate (the active ingredient in Roundup) has been linked to non-Hodgkins Lymphoma, lung damage, and damage to the red blood cells, and fetal damage in pregnant rats. According to a study at the University of Caen, “AMPA [a metabolite of glyphosate] and POEA separately and synergistically damage cell membranes like R[oundup] but at different concentrations. Their mixtures are generally even more harmful…”

The e-mail made a reference to “sparing use” of herbicides. We have to say that the spray notice in September 09 didn’t make it sound “sparing.” It covered “pavement and soil” which is just about everything except for actual buildings. Considering that Aldea is family housing, and women living there may be or become pregnant, it’s not clear why the cosmetic look of clean pavement justifies the use of toxic herbicides.

Edited to Add: The UCSF website still talks of the use of herbicides “only as necessary” both on the campus and on the trails in the forest.

[…spot-application of herbicide, only as necessary (supervised by licensed applicators according to State and County safety standards and with notification flyers posted in advance)] 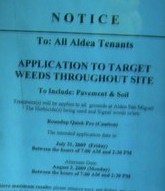 Well, of course they must consider it necessary if they use it … but we thought they had stopped. We have a query in as of 28 Nov 09, and will update this further. Meanwhile, we’re wondering what “only as necessary” means, anyway. According to the Aldea notices we saw, Roundup Pro is applied to “all grounds at Aldea San Miguel.” And fairly frequently: Here’s a notice for July 31/ Aug 3, and then another for Sept 18/21.

[Edited to Add: The UCSF website has now been updated to say that no herbicides have been used in the forest since 2008, and are not in use at the Aldea campus until studies are completed.]