A forest lover alerted us to some serious tree destruction on the Cole Valley side of Sutro Forest – the Interior Green Belt. This is the city-owned side of the forest. 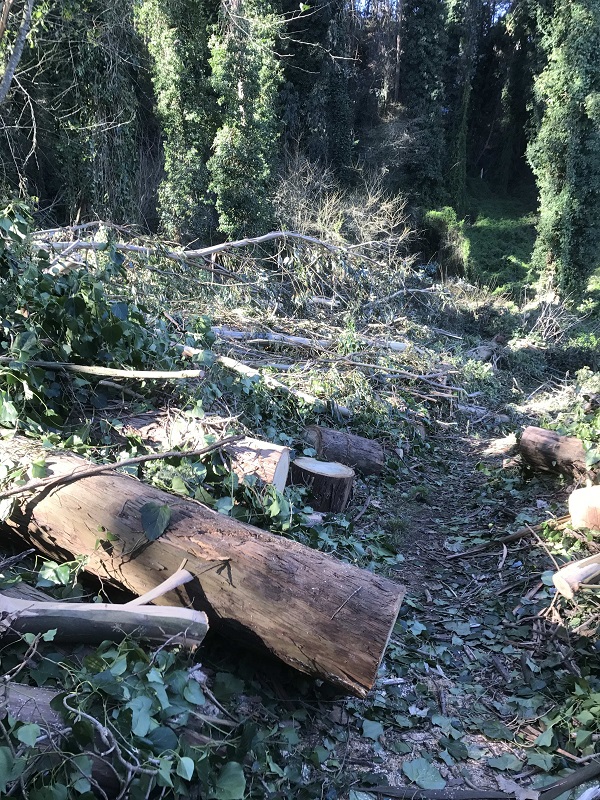 We knew that some tree-cutting was planned. Some months ago, a storm blew a tree down onto a house at night, causing damage and putting the occupants at risk. (Fortunately, they were not harmed.) After that, we heard that 11 trees were removed along the forest edge.

What’s happening now is much more – some 40-90 trees. They are pushing the forest back along its Eastern edge. A lot of trees are already down, and some beautiful old ones have notices and orange dots showing they’re slated for destruction. This will happen within the next week.  [We understand from later correspondence that the number is 55 trees. That’s a lot of beautiful, mature trees.]

Again, “safety” is being used as an excuse for tree destruction well beyond the need to remove hazardous trees that threaten homes and buildings.

This forest, nestled in the heart of the city and surrounded by neighborhoods, is headed for destruction. First, the whole area will be shrunk for the purpose of creating a “defensible space” – even though that is probably the worst thing that could be done in terms of safety of a forest that garners moisture from the fog. Then tree cutting in the forest’s interior will increasingly dry it out.  And more trees will be cut down as wind-hardened trees from the forest edge are removed.

This strip, the Interior Green Belt, was saved when the then-expansive forest was felled for development. It’s ironic that the trees preserved 60 years ago with so much difficulty are casually being cut down now. Here’s what the newscopy was back then:

Newscopy: “This is the story of Sutro forest – and how the city has laid it waste. It is a story of trees versus concrete. Of green glades gobbled up for houses, eave-to-eave, row on row. Maybe it is the story of our way of life, inevitable in the push of population. But in many ways it is a tragedy. For Sutro Forest was once an 1100-acre spread of foliage within the vast Adolph Sutro-owned San Miguel ranch, and its trees were man-grown, hand-planted in a painstaking effort to provide beauty for San Francisco. But the march of the city is trampling the forest down, plucking it out by roots. Sutro was near as our sandy hills came to having ‘the forest primeval.’ But it’s now ‘the vanishing pine and hemlocks…’ Only a few people care. Some Twin Peaks home-owners have protested. Only one city agency – the Planning Commission – has sought to preserve at least leafy fragments, snatching an acre here, two acres there almost from the bulldozers. Now it is trying to salvage one parcel of 12.5 acres…”. 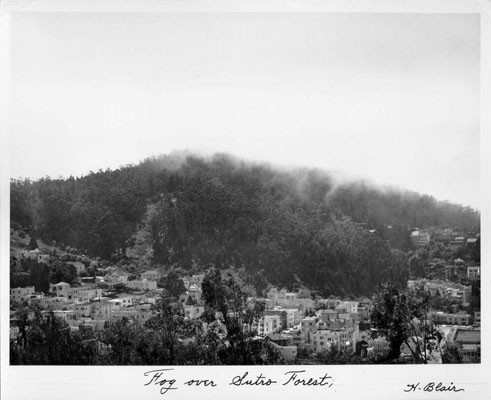 People saved it then; perhaps people can still save it from the forces nibbling away at its borders and heart.