Peter Ehrlich was the Chief Forester at the Presidio, and sat on UCSF’s Technical Advisory Committee for Sutro Forest. Tragically, he died in a bicycle accident on May 2, 2017.  The Presidio is holding a community work day in his honor on May 21, 2017 at the Spire in the Presidio, between 10 a.m. and 1 p.m. Click here for Registration and details.

This tribute to Peter Ehrlich was written by Dee Seligman, formerly Interim President of San Francisco Forest Alliance. It is republished here from their website at SFForest.org. 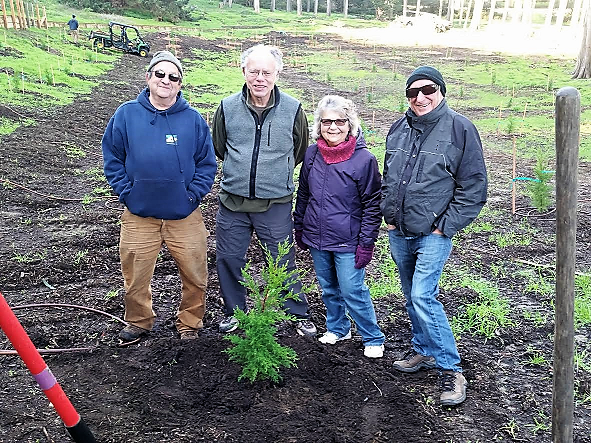 On Sunday, May 21, from 10 am to 1 pm, the Presidio Trust will host a Community Stewardship Day in honor of Peter, where staff, volunteers, and friends can celebrate Peter by caring for the trees in the cypress grove surrounding Spire. We’ll pause at noon for reflections about Peter. Refreshments will be provided. We hope as many SF Forest Alliance supporters as possible will attend this event to honor Peter.

Peter Ehrlich was a mensch. This Yiddish expression describes a human being, one in the fullest sense of the word with integrity, humanity, and worthy of emulation. It’s an apt description of Peter, the Chief Forester of the Presidio and previously the Manager of the tree maintenance programs in all of San Francisco’s parks for 15 years, who died unexpectedly in a biking accident about a week ago.

This small man from the Bronx with a big heart, a passion for trees and birds, a man of science and of literature, had a special connection to the San Francisco Forest Alliance (SFFA). With his mischievous smile, ironic perspective, and regard for classic literature, he reached out to us as a group, and to many others in the Bay Area. Caring about trees was the common denominator to being Peter’s friend and ally.

He said he learned as a kid in the Bronx to stand up for what he believed in, and Peter believed in trees—boy, did he ever! He loved trees—all trees. He did not differentiate between native and non-native but found value, inspiration, and function in all trees. He understood equally well the physical comforts provided by trees but also, what he called, “the aesthetic experience” of forests. 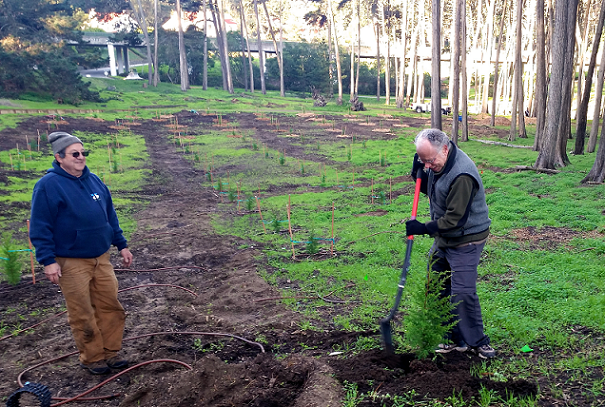 He did his best to protect all trees. In the Presidio, which is controlled by the federal government through the National Park Service, there is forest management and ongoing rejuvenation, directed by Peter. He replaced some blue gums in the Presidio with related species of eucalyptus when absolutely necessary.

However, within the municipal parks of San Francisco, such as in Natural Areas like Mt. Davidson, there has been no ongoing rejuvenation. Peter looked out for the eucalyptus in these areas, too, by working with SFFA to evaluate the trees of Mt. Davidson and Mt. Sutro. He walked both forests with SFFA leaders at separate instances and documented in writing that he did not find them unhealthy nor unusually at risk due to drought, insects, or any of the other reasons dredged up by native plant advocates for the Natural Areas Program. He supported our point of view in a letter to the Planning Commission and to Rec and Park Commission when the EIR came up for certification.

He spoke at conferences, gave local talks, and guided walks in the Presidio. I witnessed his perceptive service on the Technical Advisory Committee for UCSF on Mt. Sutro, where he asked definitive questions, such as whether there were risk ratings done for all the trees on the mountain? He emphasized that “lack of vigor”  is different than “hazard,” in other words asking for more nuanced information from any assessment of the trees. In fact, Peter’s questions prompted the assessing arborist to explain that they had two different rating systems: one for individual trees in high-use areas, but another for all the rest of the trees. This fact was unlikely to have been revealed without his astute questions.

Peter did not mince words. After reviewing an early draft of an Urban Forestry Council’s proposed document on “best management practices for the urban forest”, he advised us that “if the goal of the document was conversion [i.e., of the type of species in the forest], it should be clearly stated as such.” He advised against references to fire or other objectives “if the real goal is type conversion.” He questioned, “What are San Francisco’s ‘priorities’? What are San Francisco’s endangered species on Mt. Davidson and Mt. Sutro? The Presidio has four. What are the endangered species on Mt. Sutro and Mt. Davison? The ‘sensitive species’ are impossible to define. The word ‘sensitive’ with respect to species is overused.”

And he would not accept easy answers. For example, “thinning,” as proposed by the Natural Areas Program is not a universal cure-all. He said: “Thinning is presented as an event that is self-explanatory. It is not, as thinning must be done, if it is deemed necessary, with low-impact techniques that preserve residual trees. A contractor without tree protection constraints could do a lot of damage. In fact, even with tree protection requirements in place, an on-site monitor would be necessary to make sure residual trees were not negatively impacted.”

Another glib answer he rejected was Rec and Park’s explanation that the eucalyptus were all “dying due to drought.” He differentiated between blue gum eucalyptus having no leaves at all, possibly signifying a lack of regeneration, from blue gums having a decreased canopy percentage, not necessarily a sign of poor health. In dry weather, blue gums often protect themselves by shedding some leaves, which would transpire water, and growing epicormic sprouts instead.

Although somewhat constrained by working in a politically sensitive position in the Presidio, he was clear-eyed about the environmental politics of San Francisco. Nothing could be more telling than a comment he once sent me about the long, contentious, and circuitous process to certification taken by the Significant Natural Resource Areas’ Management Plan (formerly known as SNRAMP, now called NRAMP, or Natural Resource Areas Management Plan).

Peter said, “As Shakespeare wrote in King Lear: ‘Tis the time’s plague when madmen lead the blind.’”
We all miss Peter very much.

Peter also loved wildlife and birds. A few years ago, he sent us some pictures of young Great Horned Owls in a nest in the Presidio. He gave us permission to use them then, and we publish them here in grateful remembrance. 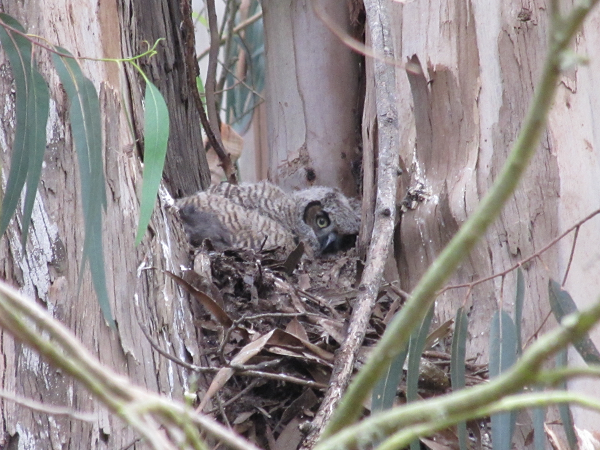 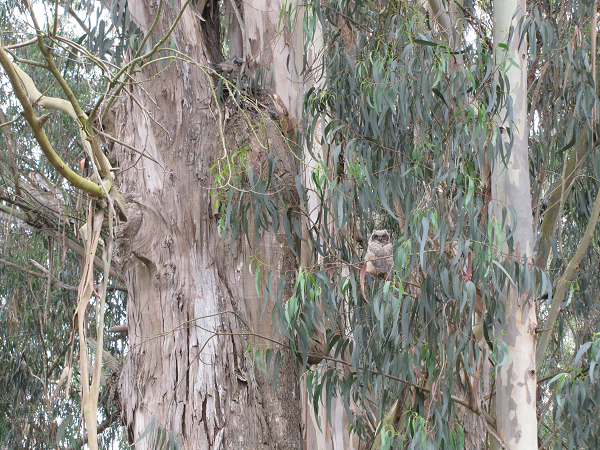 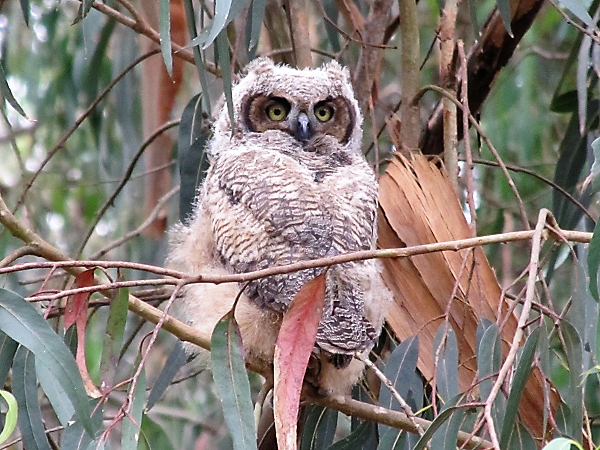 This entry was posted in Meetings and tagged Peter Ehrlich 1948-2017, trees. Bookmark the permalink.