The Sierra Club shocked the environmental community, including many of its own

members, when it not only failed to oppose the horrible East Bay plan to cut down hundreds of thousands of trees, but actually sued FEMA to cut down more trees immediately. Of course there was a protest outside the Sierra Club Oakland headquarters.  And there’s a petition out with over 2600 signatures. (If you haven’t already signed it, you can do so HERE.)

What was the Sierra Club’s reaction? Not to consider re-examining policies that were so clearly anti-environmental. Not to ask the opponents why they thought these policies were so devastating. It was to place an error-filled article in their own newsletter, The Yodeler, headlined: “Correcting the record on our vegetation management strategy for the East Bay Hills: Sierra Club’s preferred fire-prevention model would restore native habitat and increase biodiversity” 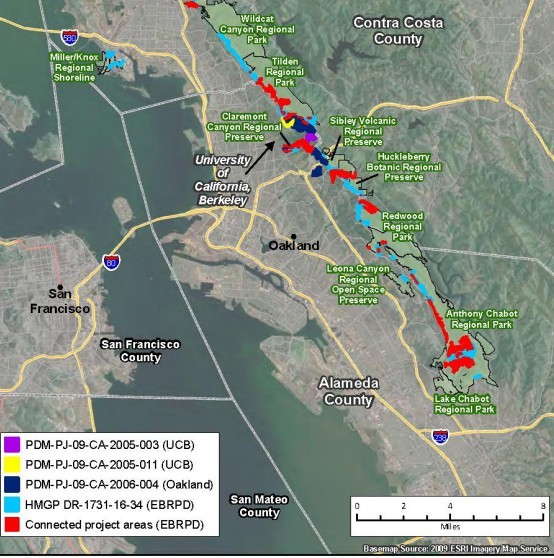 Before we correct the so-called correction, let’s outline the project:

So why is the Sierra Club supporting this? The main reason seems to be that it’s an excuse to get FEMA to fund the removal of non-native eucalyptus and Monterey pine trees. From their article: “… an ecologically-and fiscally-sustainable model for fire management that not only reduces the risk of fires but also promotes healthy and diverse ecosystems.” Since the Sierra Club isn’t about fire-reduction, the second part of that statement betrays their real interest.

But of course the ecosystem left behind will not be healthy or diverse. The article spells out the Sierra Club’s Three Rs Model: Remove flammable non-native trees in select areas most at risk for fire; Restore those areas with more naturally fire-resistant native trees and plants; Re-establish greater biodiversity of flora and fauna.

We’ll explain why all three elements are wrong for these projects.

USING FIRE HAZARD AS AN EXCUSE

SC: “The preferred strategy for vegetation management in the East Bay hills entails removing the most  highly flammable, ember-generating trees like eucalyptus in phases — only in select areas considered most at risk for fire along the urban-wild interface.”

Let’s parse that. “Highly flammable, ember-generating trees“? Research shows that eucalyptus isn’t any more flammable than any other tree.

The US Forest Service evaluation of the FEMA projects stated that the resulting landscape would be more flammable than the existing landscape: “Removal of the eucalyptus overstory would reduce the amount of shading on surface fuels, increase the wind speeds to the forest floor, reduce the relative humidity at the forest floor, increase the fuel temperature, and reduce fuel moisture.  These factors may increase the probability of ignition over current conditions.”

They blame eucalyptus for casting more embers than native trees because they are taller than the oak-bay woodland. However, equally-tall redwoods also burned in the 1991 Oakland fire:  On Vicente Road, “Two redwoods up the street caught fire like matchsticks.” Yet, the Sierra Club is not suggesting that redwoods be destroyed to eliminate the risk of casting embers. And in fact, leafy eucalyptus may protect against flying embers.

“In phases”? The Sierra Club’s suit against the FEMA grants is exactly because it objects to the phasing of tree removals!  The main focus of their suit is opposition to the “unified methodology” which proposes to remove trees over the 10 year period of the grant on only 29 acres of the total project acreage of 2,059. Their suit demands that all non-native trees be removed immediately on all project acres.

Except, as you can see from the map above, most of the trees being removed are in the middle of parks and wild lands. They are far from houses or other areas in the urban-wild interface. CAL FIRE defines “defensible space” required around buildings to reduce property loss in wildfires as 30 feet  -or 100 feet of structures in high fire hazard areas of the wildland urban interface. That doesn’t apply to these trees.

The Sierra Club thinks the projects will “restore native habitat and increase biodiversity.”

There’s no provision for restoration in the project plans. The plan is to cut down the trees, chip them and leave the mulch on the ground. Herbicides will be used. 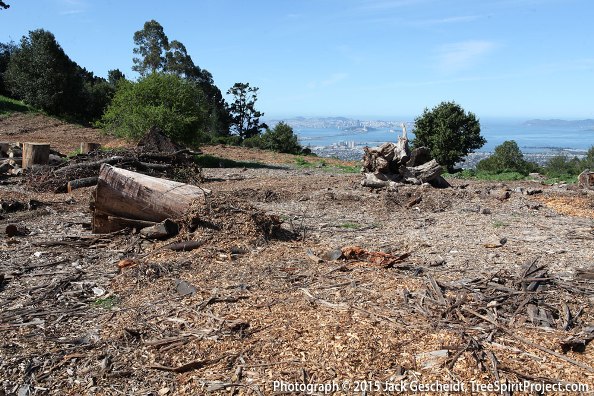 It’s really unlikely that there’ll be greater biodiversity in two-foot deep piles of mulch.  Scientists evaluating the project said: “It is not clear how the mulch would prevent the proliferation of invasive species while simultaneously encouraging the growth of existing native species.”

Scientists also said:   “Based on conditions observed during site visits in April 2009, current understory species such as English ivy, acacia, vinca sp., French broom, and Himalayan blackberry would likely be the first to recover and recolonize newly disturbed areas once the eucalyptus removal is complete.  These understory species are aggressive exotics, and in the absence of proactive removal there is no evidence to suggest that they would cease to thrive in the area, especially the French broom which would be the only understory plant capable of surviving inundation by a 2-foot-deep layer of eucalyptus chips.”

Broom may be the only plant less popular with native plant advocates than eucalyptus.

The experience with trying to maintain native plant areas has been that they require as much care as any garden. This will mean planting, gardening and weeding over 2000 acres. Neither “Restore” nor “Re-establish” are feasible.

The Sierra Club could take a tough stand on pesticides, but it doesn’t. Instead, it tries to suggest they are not an issue. The Yodeler says that herbicide: “...would be hand-applied in minimal amounts under strict controls.” 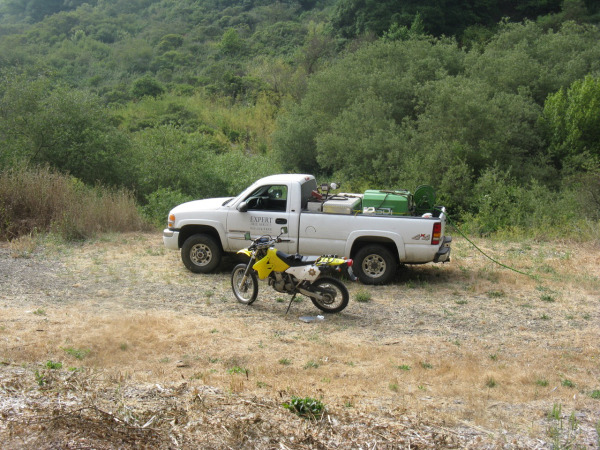 Pesticides being poured on from a tank on a truck: Small doses? (Copyright image used with permission.)

Minimal amounts? East Bay Regional Park District has stated in the Environmental Impact Statement for the FEMA project that it intends to use 2,250 gallons of herbicide to prevent the regrowth of eucalyptus. This estimate doesn’t include what’ll be used by the other two managers,  UC Berkeley and the City of Oakland.  Nor does it include the herbicides needed to kill all the flammable non-native vegetation that will be take over once the trees and their shade are gone.

The Sierra Club continues: “Any herbicide application must undergo a full environmental review to prevent impacts on humans, wildlife and habitat.”  In fact, an Environmental Impact statement (EIS) prevents nothing – it only describes the impacts. This EIS has already been completed and it says that the project will have “unavoidable adverse impacts” on “human health and safety” and that there will be “potential adverse health effects of herbicides on vegetation management workers, nearby residents, and users of parks and open space.” As far as we know, there are and will be no studies regarding impact on habitat or wildlife.

In fact, the Sierra Club has said in writing that they DON’T oppose pesticide use:

Here, we would like to thank UCSF, which has used no pesticides in Sutro Forest since 2008 (nor on Aldea campus since 2009). In 2013, they made a statement that they would not be using them at all in these area: “…as a health sciences university, we believe the right thing to do is not to use herbicides in the Reserve.”

PEOPLE LOVE THE TREES AND HATE THE PROJECT

There’s a lot of evidence that these projects are very unpopular. Though the Sierra Club has tried to say that the opposition is small – it’s not.

Over 13,000 public comments on the Environmental Impact Statement were sent to FEMA, of which 90% were opposed to this project according to FEMA.  More recently, a petition in opposition to this project has over 65,000 signatures on it.  This project is NOT the “preferred strategy for vegetation management in the East Bay hills.” 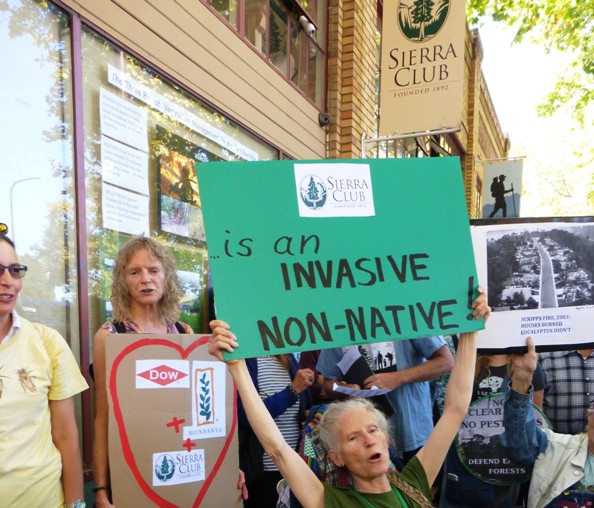 The demonstration outside the Sierra Club. Over 80 people attended.

(For a detailed analysis of the Sierra Club article and the reality of the East Bay projects – including citations – please see the article: Sierra Club cannot hide behind its smokescreen on Death of a Million Trees, a blog dedicated to fighting unnecessary tree destruction.)