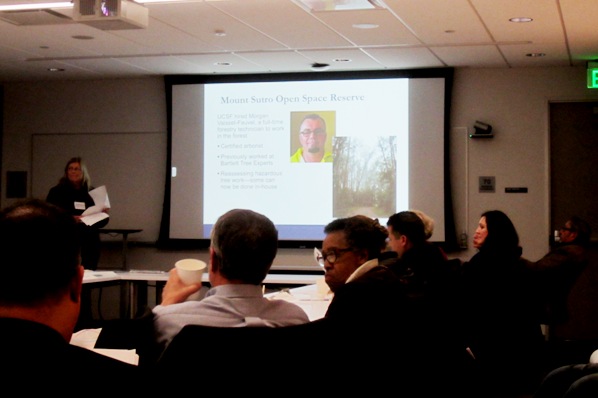 The section relevant to Sutro Forest were:
1) Today, March 5th, they are planning to cut down around 8 snags (standing dead trees). Sutro Stewards is organizing a party of around 100 women to work in the forest on Saturday, March 7th.

Here’s the email we got from them only a few hours ago:
“This weekend, UCSF will host approximately 100 women to work on a large habitat project in the Mount Sutro Open Space Reserve for International Women’s Trail Day. They will be working on a section of the Gardeners Trail, which is located between the South Ridge and West Ridge areas of Mount Sutro. UCSF staff have determined that a grouping of dead trees near where the volunteers will be working could be a potential hazard to workers. Bartlett Tree Experts will work in the Reserve tomorrow, Thursday, March 5, to remove overhanging dead branches and to remove the standing dead trees. Our staff counted approximately eight trees to be removed.”

Speaking for the San Francisco Forest Alliance, we thanked UCSF for maintaining safe trails but pointed out that it’s bird nesting season, that snags are valued habitat for birds, and we assume that they have made a bird nesting study before planning this tree work. We asked for a copy of the bird nesting survey. 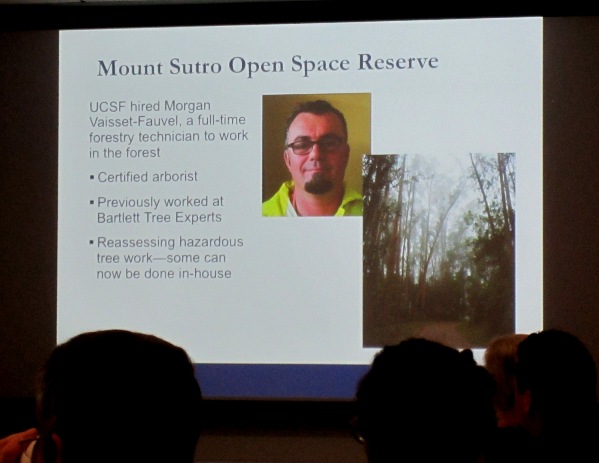 UCSF also had updates about planned construction and changes around Parnassus, with one building be closed temporarily, another demolished and the space used for contractors’ parking, and many moves happening – which would not have a net impact on the population of the Parnassus campus or the traffic.

They also mentioned a private planned new project at 5th and Kirkham abutting the Forest. It’s not theirs, but they mentioned it because it may have some impact along with all they’re doing. It will basically demolish a building with 86 apartments, and substitute a new building with 460 apartments. The project website is at thekirkhamproject.com

They also had presentations with updates for their plans at Mt Zion, and talked about their ongoing efforts to hire locally for their construction projects. (Not going too well, because with the burst of construction going on in the city, there’s a lot of competition for local talent.)

Most of the presentations were about such things as partnership with educational organizations, and on the Bay Area Science Fair (including a cool demo of how to extract the DNA of a strawberry – filter the juice of one strawberry through filter paper into a clean cup, add isopropanol, wait for it to become snotty and then carefully lift the ‘snot’ into a test-tube).