“Invasive” Plants can Save Native Wildlife

We recently came upon this article by author Toby Hemenway, on his blog Pattern Literacy.  Written from the point of view of a permaculturist, it responds to nativist objections that the permaculture community plants non-native or even “invasive” species. Since we’ve had discussions here about the value of non-native plants as wildlife habitat for native insects and birds, we reprint it here with permission. (We have made minor edits, and added  the emphasis and photographs.) 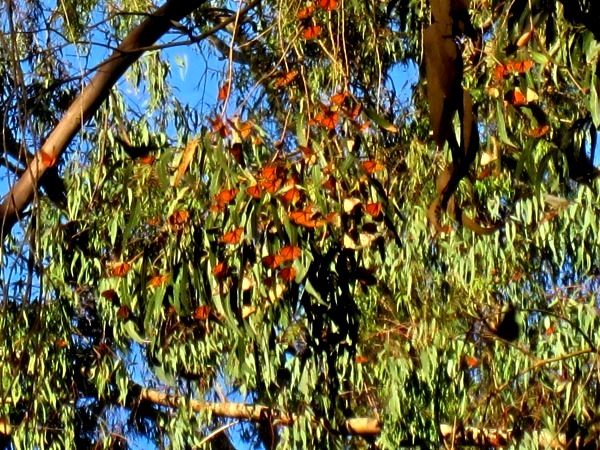 There’s been a lively discussion on permaculturists’ occasional planting of introduced species known to naturalize (or, in loaded terms, invasive species) at this blog: Native Plants and Wildlife Gardens. Some there have disputed that exotics can play critical roles in habitat, and I posted the words below to show that removal of exotics can be very damaging to native wildlife:

Here are hard data on introduced plants that have rapidly formed partnerships with native insects, from a paper, “Exotics as Host Plants of the California Butterfly Fauna,” by Sherri Graves and Arthur Shapiro, in Biological Conservation (2003) 110:413-433. It was sent to me by a [San Francisco Bay Area] blogger, Death of a Million Trees, concerned about the wholesale removal of healthy exotic trees from large swaths of rural [SF-Bay area] parks. Other ecologists questioning the wisdom of natives-only policies are Mark Davis, Dov Sax, Erle Ellis, Matt Chew, and Peter Del Tredici. There is, indeed, widespread criticism of invasion biology by biologists.

Dr Shapiro is an ecologist at UC-Davis. His findings:

In 1925, California had 292 species of naturalized exotic plants. In 1993, there were 1057. So about 75% of California’s exotics have been there less than a century. Yet overall, 32% of California’s native butterfly species are now feeding or breeding in non-native plants.

In the city of Davis, 29 of 32 butterfly species breed on introduced plants. 13 of them have no known native hosts in Davis at all. This suggests that introduced plants have prevented the extinction of local butterfly populations in developed areas. Alfalfa and vetch fields have been colonized by at least 12 species of butterflies, with extremely dense populations. 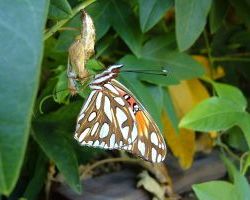 Shapiro shows many other cases where native butterflies are feeding and breeding on introduced plants like Cork oak, passionflower, Bermuda grass, Senna, Rumex, as well as Monterey pine outside of its natural range. On the downside, Shapiro noted two cases of butterflies breeding on exotics that were toxic to larvae, wasting those breedings. But the overall finding was that many species of introduced plants could each support many species of insects, and individual species of insects were able to feed on multiple introduced species.

There are many papers like this. Multiply this California paper on one order of bugs by 50 states and all the insect orders, and you have thousands of insect species relying, critically, on thousands of introduced plant species.

What is interesting here is that, like native enthusiast Doug Tallamy, Art Shapiro is an entomologist, yet the two come to opposite conclusions based on hard data. I think the data support both: native plants are critical for insect health, and exotics have rapidly co-evolved with many species of native insects for critical support, especially in cases where development has destroyed local hosts.

So I think it’s time to start dialing down the rhetoric about exotics breaking up native-species partnerships. In fact, to me this raises an irony. This paper shows that when development or farming has eliminated native hosts, removal of large areas of introduced plants can destroy the only available hosts for native insects. So I’d like to turn around the whole question raised by this blog: We have absolutely no evidence that permaculturists (as opposed to, say, nurseries) have ever introduced a species that has later escaped into the wild from their planting. That’s just a “what if” scenario with no support for it, so, quoting Beatriz (a poster at the above blog): “Where are the DATA” for this assertion?

But we know very definitely that natives-only people have removed from large areas, wholesale, valuable host species, like Eucalyptus, star thistle, and many others. Dr. Shapiro and many others have expressed abhorrence for this very damaging practice: See Professor Arthur Shapiro’s Comment on the Environmental Impact Report for the Natural Areas Program.

Permaculturists, unlike nativists, are not going into wild and semi-wild lands and exterminating valuable host species. Permies don’t have the kind of hubris that says we know what’s best for wild land (we have other forms of hubris!). We restrict our activities to planting valuable wildlife species in yards, farms, and other highly developed areas. We’re taught to stay out of the bush, as Mollison says. That is a far more conservative and safe action than messing around in the wild.

I think we can safely conclude that native plant enthusiasts have done far more damage to native insect populations than any permaculturists, real damage at scale, versus hypothetical damage. And I am grateful to Sue’s blog for the irony of helping to point that out.

Look, we’re all human, and we tinker with things we don’t understand, as part of our nature. Permaculturists are learning from nativists that it’s a bad idea to plant introduced species known to be local “naturalizers,” to use a neutral term. And I hope the nativists (and I am a native plant lover) will learn that it is equally unwise to exterminate naturalized species, because the roles of those species are not understood, but are known now to often be critical hosts to many natives. We have a lot to learn.

About the Author:  Toby Hemenway is the author of Gaia’s Garden: A Guide to Home-Scale Permaculture, which was awarded the Nautilus Gold Medal in 2011, was named by the Washington Post as one of the ten best gardening books of 2010, and for the last eight years has been the best-selling permaculture book in the world. Toby has been an adjunct professor at Portland State University, Scholar-in-Residence at Pacific University. He has presented lectures and workshops at major sustainability conferences such as Bioneers, SolFest, and EcoFarm, and at Duke University, Tufts University, University of Minnesota, University of Delaware and many other educational venues. His writing has appeared in magazines such as Natural Home, Whole Earth Review, and American Gardener. He has contributed book chapters for WorldWatch Institute and to several publications on ecological design. He has a degree in biology from Tufts University. More information on his website: Biography for Toby Hemenway

1 Response to “Invasive” Plants can Save Native Wildlife