On Sept 11th, UCSF emailed its list that it had “completed urgent fire-safety measures on approximately 12 acres on Mount Sutro.”  In the same email, UCSF said that the measures were “in response to an assessment this summer by the San Francisco Fire Department (SFFD) that found “extra hazardous fire conditions” in the urban forest.” (In fact, UCSF drafted the letter for SFFD.  That story is HERE.)

We’ve been taking a look around at the areas where UCSF has recently removed understory habitat and trees under 6 inches in diameter. Our conclusion: There’s good news and bad news.

The impact has been varied. About 4 acres have the worst impact; another 4 acres or so have been moderately impacted; and the remaining areas have minor impacts. (Or even no impacts – UCSF initially expected to do 15.6 acres, but has done only 12. We still have an information request to UCSF to tell us exactly what it did, and where.)

All told, about 20% of the Mt Sutro Open Space Reserve has been affected.

Even though the “work” is not as bad as it might have been, we have to wonder what the win is for UCSF in this.

This has led to all kinds of theories as to the actual motivation, ranging from “They wanted the last word” to “Facilities management budget – use it or lose it” to the ever-popular “Clearing to show buildable lots.” We’re not adding our voice to the speculation, but we do think it’s inevitable.

One of the worst impacted areas lies between the Aldea campus and Christopher Drive, where they have essentially gutted the forest.

We’ve shown these photographs before, but in case you missed them, here they are again. The picture above is the “Before” photograph. The one below is “After” the work. 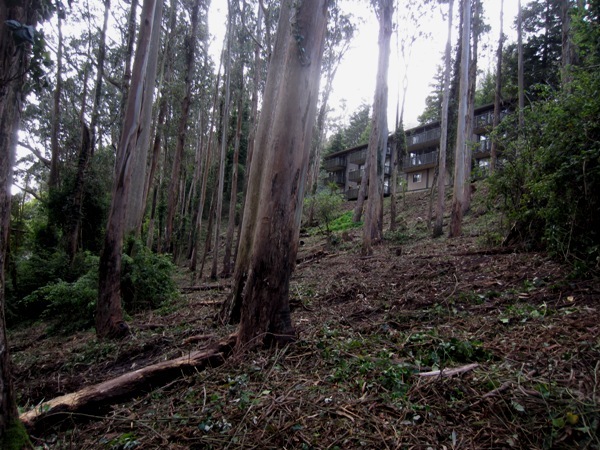 What have we lost?

Apart from uglifying this section of the forest and destroying its ecosystem, several things:

Is it safer? We don’t think so. This area is squarely in the fog belt. If left undisturbed (as in the “before” picture), not only would the trees harvest the moisture from the fog, but the dense vegetation would reduce evaporation even on dry days so the forest remained damp year round. Now its capacity to retain moisture is reduced. Also, with dense vegetation – including impenetrable blackberry – no one went in there, which greatly mitigated ignition risk. On the whole, we think this is now less safe than before.

The area below the Aldea campus on the North side is also one of the most severely impacted. This is an “after” picture.

We don’t have a “before” picture immediately available, but the area in the background of the picture below shows the preserved area north of the “work” area. (Much of that is ‘Interior Green Belt’ land belonging to the City.) This gives a sense of what it naturally is. 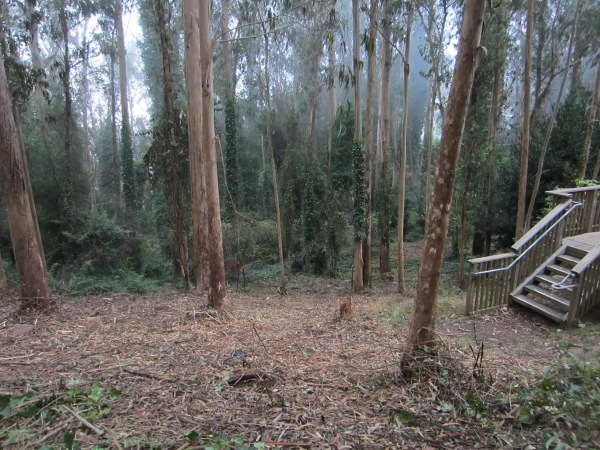 We are concerned about increased hazard here. We know from experience that this is an area that does dry out considerably where it’s opened up; the contrast can be striking with areas of mud only inches from dust.

In the “work” area, the understory has been removed; small trees have been felled and chipped and the wood chips left on the ground; and vines have been cut, which will kill them so they dry up and become much more flammable than when they were alive and moisture-filled. This ecosystem has lost much of  its capacity to store moisture, and with the sub-canopy and tall bushes gone, it may even have lost some of its ability to harvest the moisture from the fog.

Fortunately, we believe there is an easy mitigation possible: sprinkler systems. There is water availability and irrigated landscape within the campus, and presumably that could be extended to this area. (We would also suggest UCSF consider something similar for the dry, open areas north of the Chancellor’s residence.) Could they have installed sprinklers without gutting the area? Probably. It might have been cheaper.

We checked out the area around the upper water tank (the same one that’s now unfortunately visible from the Native Garden). Here’s the Before picture (taken in July 2013). 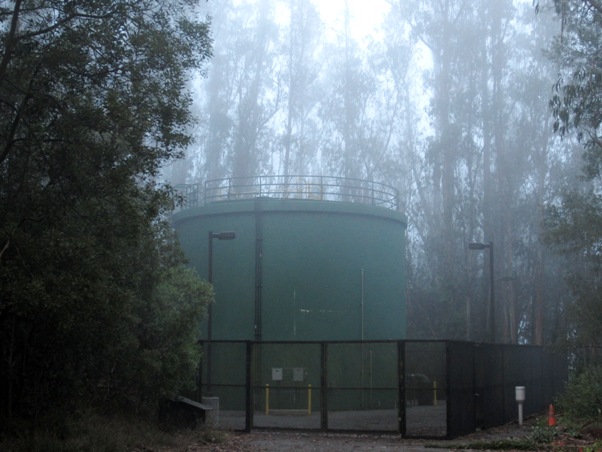 The picture below is what it looks like now: all the vegetation surrounding and partially hiding it has been removed.

It’s been chipped and left on the ground. The stumps of the small trees that were removed have been covered in black tarp. 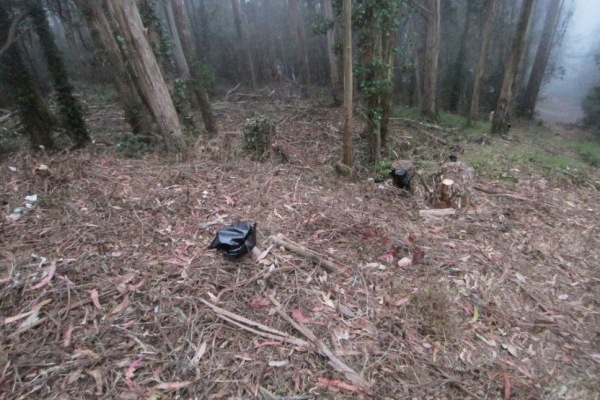 From another moderately-impacted area, here’s a photo from the work along Christopher.

Essentially, they’ve cut back vegetation to about 20-30 feet from the road. (Ironically, this is the area where SF DPW did some careful brushing a month ago, deploying goats.)

According the the SFFD letter, the “Western” space along Koret Way, has research, academic and clinical buildings on downhill side, with  “potentially flammable chemicals stored within the laboratories.  This sounds quite dire, but in fact the work here had minimal impact. Here’s a “before” picture from Google maps, with a date of August 2012. 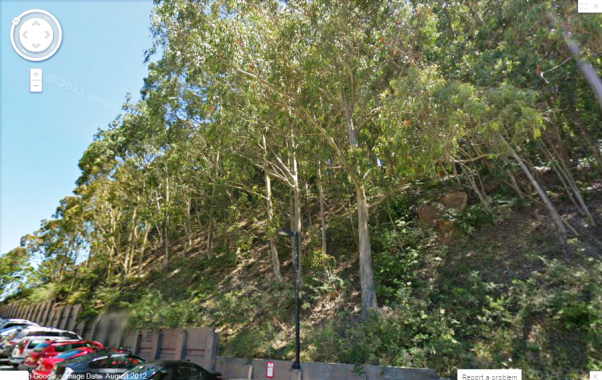 They mainly seem to have removed ground cover. We hope that doesn’t mean erosion and soil movement when it rains this winter; that slope is quite steep. For now, the impact appears minor.

Since most of the work was concentrated on the perimeter, fortunately only a few trails have been affected: