We are publishing, with permission and minor edits, this statement from a Board Member of the Hills Conservation Network.  This East Bay organization includes among its Board people who were directly impacted by the Oakland fire, and are dedicated to improving fire-safety – and not by felling trees.

LESSONS FROM THE OAKLAND HILLS FIRE OF 1991

I do not live in San Francisco, but I have occasionally enjoyed hiking the trails of Sutro Forest.  Last time I was there I encountered a professional photographer who was taking photos for a magazine in New Zealand.  She told me that she had not expected to see such a unique forest in the middle of a city. She said she would value the photos she had taken of Sutro Forest more than any photos she had taken of S.F. City streets and the Bay, including the view from Marin Headlands.   She described the experience of being in Sutro Forest as”spiritual” and inspirational, a “rare find,” not at all what she had expected to see in San Francisco. 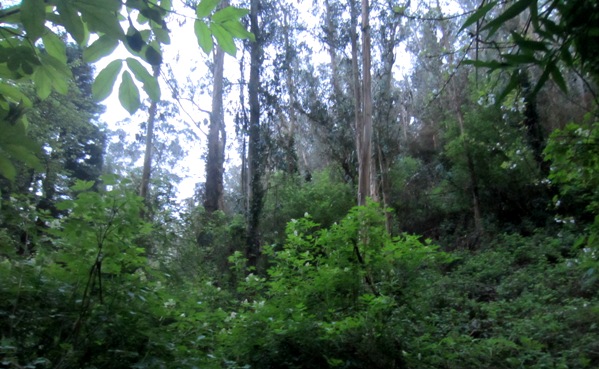 As a representative of Hills Conservation Network (HCN), I want to primarily address the issue of fire hazard.

All of the members of HCN’s board of directors live in the North Hills of Oakland, within the area that was almost completely burned in the Oakland-Berkeley fire of 1991. My house, built in 1939, is in a strip of about 15 houses on Alvarado Road that did not burn, although all of the houses and vegetation (plants and trees, native and nonnative) above and below that strip, as well as everything across the street burned to the ground.

My family was fortunate. We do not know why these 15 houses and a few others here and there in the hills were spared. But we do know that the fire stopped just as it reached three towering eucalyptus trees that stand at the edge of Garber Park, a 13-acre city of Oakland park that also did not burn in the fire (even though it was and still is filled with largely unmaintained trees and understory). The flames of the fire did not touch those three eucalyptus trees which had stood there for more than 100 years, even though at that time, there was plenty of bark litter on the ground under them.

After the fire, as you can imagine, fire survivors cast a great deal of blame on various public agencies, including first responders such as the Oakland Fire Department (OFD), for its lack of training in fighting wildfire. (In fact, an Oakland fire fighter had restarted the fire on Sunday morning when he walked, stamping his boots, over the cinders and ash left from a small fire that had seemed to have been extinguished the previous day. As he walked, sparks and embers lying under the cinders flew up; the hot wind carried those sparks into dry grass and brush, and then into pines–that is how the Sunday fire started and soon spread out of control as the flames ignited wooden roofs and houses close by.)

I won’t list all of the issues that led to the rapid and tragic spread of the 1991 fire. The important ones were that:

I will not deny that trees of all species, native and non-native, did help to spread the fire. But some eucs and other tall trees with hardwood trunks were still standing–with their leaves intact–in various places where everything else burned. After the first half hour of the fire, the flames were leaping from house to house, not from trees to houses, although the trees close to and leaning over houses burned, especially where dead leaves had fallen into gutters, and the house was unlucky enough to have wooden shingles.  Even though it was a hot day, the trees did not “explode.” The popping and banging sounds came from cars exploding as gas tanks ignited.

Yet within two years after the fire, the eucalyptus trees were being blamed for the fire–and to prevent another terrible fire, the advice was to remove all of the eucalyptus in UC owned forests, in East Bay Regional Parks, and in Oakland’s public parks that had not even been involved in the fire–and were several miles from any structure.  It was certainly easy and safe to scapegoat the eucalyptus trees since they could not defend themselves and native plant advocates in this area had been trying to get them removed for years, a campaign that is still going on. We trust that UCSF will be able to see through the fog of this propaganda campaign against nonnative vegetation, and make a decision that will be best for both fire safety and Sutro Forest.

Our organization, Hills Conservation Network, came together because a group of fire-area residents realized that it was important for fire safety to research and publicize the real reasons why the 1991 fire spread out of control so quickly. The majority of those on our board of directors lost their houses in the fire. So, we did not start our organization because we are “tree-huggers.” We are committed to learning as much as we can about preventing wildfire and educating our neighbors about the importance of big hardwood trees (such as eucalyptus) in providing not only carbon storage that cuts the greenhouse emissions warming our planet, but also in mitigating fire risk.

Based on our experience of the 1991 Oakland-Berkeley fire, and on our research,  we of the Hills Conservation Network believe that Mt. Sutro forest should be preserved. Even more than the trees in Garber Park, that, I repeat, did not burn, even though they were close to the fire, the tall trees of Mt. Sutro are draped in cooling mist for most of the year. The understory at Mt. Sutro is moist, providing an almost fire-proof ecology.  If this understory is removed, and the trees are removed, what you will have left are weeds, growing profusely in the sun once the shade canopy of trees is no longer there.

Based in San Francisco’s East Bay, the Hills Conservation Network (HCN) is committed to fire mitigation in the hills without deforestation.  The HCN website is HERE, and their blog is HERE.

They issue quarterly newsletters following fire hazard reduction and tree-protection issues. Their Autumn 2012 newsletter (PDF) featuring the Oakland Fire Department’s response to some of the issues in the 1991 fires is HERE .

They are currently battling a plan to cut down hundreds of thousands of trees in the East Bay, and are in the process of raising funds for a potential legal defense. That information is HERE.