Why Does UCSF Want to Destroy Sutro Forest?

This article is republished from Death of a Million Trees with permission and minor edits.

Why Does UCSF Want to Destroy Sutro Forest?

The short answer to that question is “I don’t know.” However, since many of the over 1600 signers of the petition to University of California San Francisco (UCSF) to save the forest have asked this question, it seems that they deserve some answer. So, in this post, we will tell you the reasons that UCSF has given for its plans to destroy the forest.

THE SUTRO FOREST IS NOT UNHEALTHY 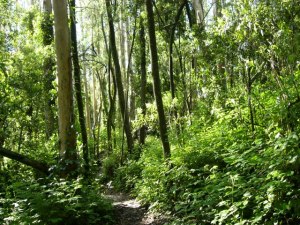 The Save Sutro website recently posted the professional opinion of two arborists who evaluated the Sutro forest and pronounced it healthy. We recommend that article as a starting point for anyone who wishes to be reassured on this important point.

The Draft Environmental Impact Report for UCSF’s planned project claims that the forest is old and dying. If we don’t beat it to the punch and kill it first, it will soon die without our help. An analogy comes to mind: “We had to destroy the village to save it,” which was the explanation given for the destruction of a village during the Vietnam War. It didn’t make sense then and it doesn’t make sense now.

The fact is, the Sutro forest is young and in the prime of its life. Eighty-two percent of the forest is blue gum eucalyptus. Blue gums live in Australia from 200 to 500 years. (1) They live toward the longer end of that range in milder climates such as the San Francisco Bay Area. The blue gum eucalypts were planted on Mount Sutro in the 1880s. It is still a young forest.

Another indication that the forest is young is that the individual trees are small by blue gum standards. The study plots used by the Draft Environmental Impact Report (DEIR) to calculate how much carbon is stored in the trees found that 77% of the trunks of the trees are 5 inches in diameter at breast height or less (if the study plots are representative of the entire forest, which is questionable). It also says that this species of eucalyptus grows very fast and that its trunk is 9 inches in diameter after only three years of growth. In other words, the DEIR claims that the trees are old and no longer growing, yet it says that most of the trees are very small and it intends to destroy the small trees, not the big ones. This is just one of many contradictions that we find in the DEIR.

THERE IS LITTLE RISK OF WILDFIRE IN THE SUTRO FOREST

One of the most powerful rhetorical tools used by native plant advocates to justify the destruction of our urban forest and motivate the public to pay for these expensive projects is the fear of fire. UCSF uses this strategy as well. Frankly, we doubt that UCSF believes it themselves because they applied for a Federal Emergency Management Agency (FEMA) grant to pay for this project in 2008. FEMA informed UCSF that there is little risk of wildfire on Mount Sutro. UCSF withdrew its grant application rather than answer FEMA’s questions.

FEMA asked UCSF to supply scientific evidence that the project would reduce fire risk despite the fact that the project would reduce fog condensation from the tall trees which moistens the forest floor, making ignition unlikely. FEMA also asked for scientific evidence that a wind driven wildfire would not be more likely after the destruction of the wind break provided by the forest. UCSF chose to withdraw its grant application, presumably because they could not answer those questions.

You might ask, where is UCSF getting the money to pay for this project? We don’t know, but we consider that a legitimate and important question given that UCSF is a publicly funded enterprise.

UCSF may not be able to answer FEMA’s questions, but we can, using specific scientific studies. In 1987, 20,000 hectares burned in a wildfire in the Shasta-Trinity National Forest. The effects of that fire on the forest were studied by Weatherspoon and Skinner of the USDA Forest Service. They reported the results of their study in Forest Science. (2) They found the least amount of fire damage in those sections of the forest that had not been thinned or clear-cut. In other words, the more trees there were, the less damage was done by the fire. They explained that finding:

“The occurrence of lower Fire Damage Classes in uncut stands [of trees] probably is attributable largely to the absence of activity fuels [e.g., grasses] and to the relatively closed canopy, which reduces insolation [exposure to the sun], wind movement near the surface, and associated drying of fuels. Conversely, opening the stand by partial cutting adds fuels and creates a microclimate conducive to increased fire intensities.”

In other words the denser the forest,

All of these factors combine to reduce fire hazard in dense forest. Likewise, in a study of fire behavior in eucalyptus forest in Australia, based on a series of experimental controlled burns, wind speed and fire spread were significantly reduced on the forest floor.(3) Thinning the forest will not reduce fire hazard. In fact, it will increase fire hazard.

Jon E. Keeley of the USGS is a world-renowned expert on the fire ecology of California. We have read his recently published book (Fire in Mediterranean Ecosystems: Ecology, Evolution and Management, Cambridge University Press, 2011) and many of his articles. Anyone with a sincere interest in wildfire hazards in California would be wise to read these publications. Reference to Keeley’s work is conspicuously absent from the Draft EIR.

Keeley’s most recently published study of specific wildfires in the Wildland-Urban-Interface (WUI) of California is most relevant to consideration of wildfire hazard in the Sutro Reserve. (4) The authors studied the property damage resulting from specific wildfires in California “…and identified the main contributors to property loss.” Keeley and his colleagues found that steep slopes in canyons that create wind corridors were the best predictors of fire damage and that grassy fuels were more likely to spread the fire than woody fuels. Applying these observations to Mount Sutro, its topography is the biggest factor in the potential for wildfire and substituting the forest with grassland and scrub will result in more dangerous fuel loads.

Scripps Ranch fire, San Diego, 2003. All the homes burned, but the eucalypts that surrounded them did not catch fire.

UCSF and native plant advocates make allegations about the flammability of eucalypts by misrepresenting actual wildfires in the Bay Area. These allegations are addressed elsewhere on Million Trees, which we invite you to visit if you have more questions:

ALL PAIN NO GAIN

So, if the forest is healthy and destroying it does not reduce fire hazards, how can UCSF justify all the damage this project will do to the environment:

We can’t imagine why UCSF wants to destroy its forest. We understand why native plant advocates support this project because they are making the same demands all over the Bay Area. They want land managers to destroy non-native trees because they believe that destroying them will result in the return of native plants. The UCSF project makes no commitment to plant native plants after the forest is destroyed, with the exception of a few small areas and then only if “money is available.” Native plants will not magically emerge from the wood-chip tomb on the forest floor. Is it possible that UCSF shares the fantasy of native plant advocates that this destructive project will result in a landscape of grassland and chaparral which is the native landscape on Mount Sutro? Surely a scientific institution of such distinction knows better. Or it should.

Here are the things you can do to help us save this beautiful forest:

3 Responses to Why Does UCSF Want to Destroy Sutro Forest?