The Draft Environmental Impact Report (DEIR) for Sutro Forest is available for comment. 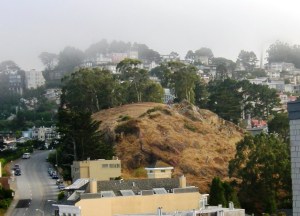 It’s long, and we’re still going through it. (We find the report cover a little disturbing, though; the “forest” seems to consist of some trees growing in an open setting, and flowers in the Native Plant garden at the summit – and a map that shows bold areas of intervention and large trails. It implies a vision for the forest that’s similar to Tank Hill.)

Here’s the summary of the planned project, taken from the DEIR (our emphasis):

“The University of California, San Francisco (UCSF) proposes to implement a number of
management activities in the UCSF Mount Sutro Open Space Reserve (“Reserve”) at its flagship campus site at Parnassus Heights. The University‐owned Reserve is a largely undeveloped 61‐ acre forest located within the Parnassus Heights campus site near the geographical center of San Francisco. The Reserve is surrounded by the UCSF campus ‐‐ UCSF’s hospital, research, educational and support structures to the north/northwest ‐‐ and by urban residential neighborhoods to the south, east and west. In addition, the Interior Greenbelt natural area, owned by the City and County of San Francisco, is adjacent to the east side of Reserve.

“The proposed project would involve implementation of a number of management activities, including thinning of the forest, native plant restoration and enhancement, and conversion planting (removal of non‐native trees and plants and conversion to native species). Vegetation management actions are proposed to occur throughout the Reserve over many years. Under full or worst‐case implementation of management activities under the proposed project, approximately 60% of all the existing trees, including large and small trees, could be removed from the Reserve, the majority of which would be small trees less than 12 inches in diameter.

For those who would like to start looking at it themselves, we’re putting the PDF below.

Though it’s apparently very long (over 1000 pages), it in fact incorporates the whole of the Initial Study (which we wrote about in January 2011). We’re pleased to note that they have actually responded to comments asking them to evaluate some factors they hadn’t planned on doing two years ago. You don’t actually need to read the Initial Study now.

1 Response to The Draft Environmental Impact Report for Sutro Forest