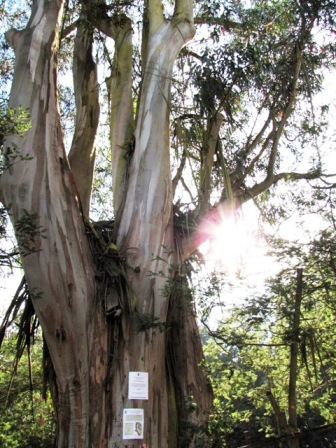 Glen Canyon Park is one of San Francisco’s jewels. It’s a long narrow tree-filled canyon, including the “owl tree” where a Great Horned Owl has raised its young many years in succession, and two natural bee trees.  Of its 70 acres, 60 comes under the Natural Areas Program (NAP). The other 10 acres are for active recreation around a Recreation Center, tennis court and playground.

SFRPD intends a major renovation in the area of the Rec Center: upgraded playground tennis court, and restroom, and a grand new entrance and a heating system for the Rec Center. They also want to fell 58 trees, including some beautiful old “heritage” eucalyptus trees planted in the 1880s.

SFRPD applied for an exemption from the  California Environmental Quality Act saying that they would not be working in the Natural Areas – but it’s not true. They will be cutting down trees in the Natural Areas. [SF Forest Alliance has an article on their website: NAP Under the Radar.] It’s not the first time they’ve changed their story about what’s happening in Glen Canyon Park; at first, the Rec Center project would involve 10 trees, then the number was suddenly altered to 70 trees, and now it stands at 58.

This is just the beginning of the tree-felling. Another 30++ trees are due to be felled for the trails project. Another 60 or so for a Forestry project. Another 120 for “natural areas” to plant native gardens. And any tree under 15 feet in height – which would include some of the twisty old acacias and willows – aren’t even trees and could be removed at will.

All in all, it’s estimated that over 300 trees will be removed in Glen Canyon.

Given the SFRPD’s track record of changing tree-felling plans, it could turn out to be any number between 250 and 500.

Many have been trying to save the trees. San Francisco Forest Alliance (SFForest) has a petition out, and nearly 3000 people have signed it.  But SFRPD has not discussed revisions of these plans. It’s been changing its story, and even SFForest, which has a research team working on it, had difficulty keeping up with the twists and turns.

[That’s told here: Glen Canyon Park- The Good, The Bad and The Ugly]

With tree-felling due to start on October 15th, someone (not SFForest) filed an appeal with the Board of Appeals.

It’s bought time to try once more to save the trees. Without the appellant Anastasia Glikshtern, the first batch of trees would be gone by now. Though she had originally been given a date of December 5th for a hearing, SFRPD forced her into a hearing on November 14th – giving her hardly any time to document her case, especially since SFRPD has the documents. It also means public comments have to be into their office by 4 p.m. on November 8th, Thursday. You can support this appeal. 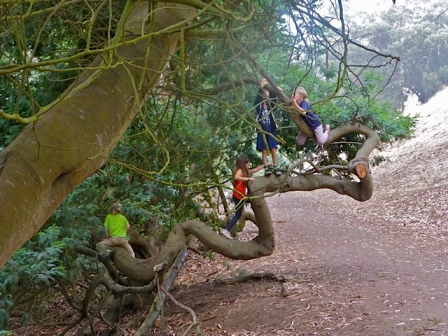 One of the trees to be felled

YOU CAN SUPPORT HER APPEAL

They’ve also made it difficult to support appeals (11 paper copies by November 8th to their Mission St office), but the public can still do so.

Here’s what I wrote as an individual, and resident of San Francisco:

I am writing in support of the appeal made by Anastasia Glikshtern, as an individual who is a resident of San Francisco, and  a frequent visitor to Glen Canyon Park.

1.  Contrary to allegations in the press that Ms Glikshtern is a single individual quixotically holding up the project, she is in fact a courageous woman who was willing to put her name to an appeal many people felt was essential in the face of SFRPD’s refusal to work with dissenters to their plans. Had work started as planned on October 15, some 55 trees that are still standing would already be gone. Thousands of people believe that Glen Canyon Park derives its ambiance from its trees and want them preserved.

2.  In its application for a CEQA exemption (Case 2011.1141E)  SFRPD claimed it would do no work in “Natural Areas” of the Park but confine its project to the “flatlands.” This was proved untrue when the project was bid out and it was clear work will be performed in the Natural Areas.

3.  Though a number of community meetings were held, the SFRPD was dismissive of those who wanted to save the trees – at that time, projected to be 10 or11 trees in all – that would be destroyed in all the options SFRPD provided for the project. This includes historic and ancient eucalyptus trees planted around 1887.

4.  Subsequently, SFRPD’s Dennis Kern made a statement at a neighborhood presentation and at the August 15, 2012 Parks Commission meeting that 70 trees would be removed; 10 for the project, and 60 because they were “hazardous.”  Subsequently, Hort Science (the arborist) submitted an updated report (dated October 1) recommending 58 trees for removal (of which 2 had fallen spontaneously). They also provided a risk rating for every tree in the Project area. Only two were “hazardous” in the usual meaning of the word (i.e. scoring 9 or more on the Hort Risk-Rating 3-12 point scale). One was recommended for removal, the other for pruning.

[Webmaster: That information is here: SFGlenCanyon’s article on The “Hazardous” Trees of Glen Canyon.“

5. Meanwhile, at a public meeting, a member of the tennis community pointed out that what they sought for the new tennis courts was a change in orientation (from east-west to north-south) not provided for under the Project.

If you want to write a letter in support – or even better, attend the hearing on November 14th, here’s how.

IF YOU WISH TO SUPPORT HER APPEAL

If you would like to send in letters of support of Anastasia’s appeal, please plan on doing so ASAP. They are due into 1650 Mission St, Suite #304, by November 8th before 3.30 p.m.

You may also want to come to the hearing. Every public comment will have weight. If everything goes according to schedule, the hearing will be held on November 14th at 5:00 pm at City Hall, Room 416.  Every comment helps with her appeal.

2 Responses to Saving the Trees of Glen Canyon Park