We’d written earlier about chainsaws in Glen Canyon Park, even though spring is the breeding season for birds and animals, a time when trees and thickets should be left undisturbed.

[Click HERE to read that article, Chainsaws in the Nesting Season.]

We could understand if it were commercial builders on a tight time-line and budget that didn’t care about things like that. But this is the San Francisco’s Natural Areas Program – the NAP.  Despite protests from the San Francisco Forest Alliance (SFFA), they haven’t stopped. 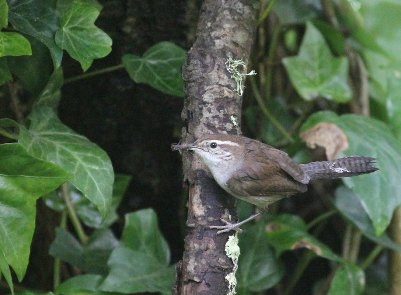 Recently, the SFFA website carried a story with photographic evidence that Bewick’s wrens were nesting in Glen Canyon Park. This is unusual; they are known to nest in very few places inside the city.

(Go HERE to read the story and see more pictures of the bird.)

Did it give the NAP pause? Not to our knowledge. They’re still active there with pesticides and… tree trimming.

A great horned owl has been nesting in Glen Canyon for many years, and has chicks again this year. 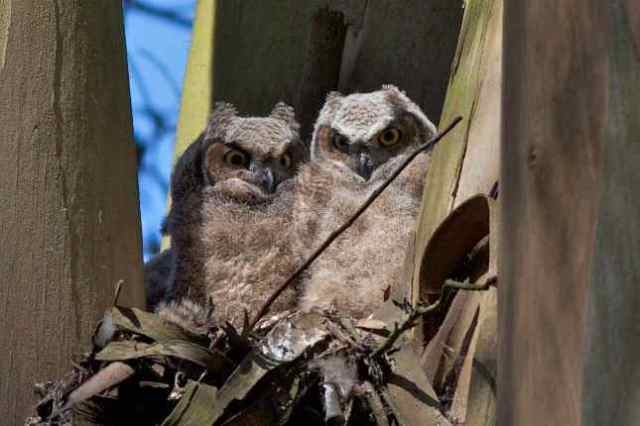 Someone described it as “our celebrity owl” because the location of the nest is an open secret, and several wildlife photographers have documented the youngsters. One would think that the NAP would be particularly careful of a known nest, with known chicks in it.  (There’s also a nest of red-tailed hawks nearby.)

But no.  Here’s what another article in the SFForest.net website said:

“Yesterday, April 27th, there were at least five trucks with tree-cutting equipment in that park. There was also a sign: “tree work”.  Visitors to the park at first were deceptively relieved when they heard that trees were simply going to be trimmed — they were not going to actually be cut down. But few had thought the issue through: This is nesting season. Everyone who knows anything about wildlife knows that you don’t interfere with habitat when animals are raising their young.

“We don’t know how many birds were displaced, nor how many nests were destroyed. We do know that lopping off limbs occurred within less than 100 feet of our owl family — there was tremendous noise, and tremendous activity. The owl triplets nesting in the crook of a Eucalyptus tree have not fledged — they cannot fly yet.

“And the Red Tail Hawks, though further away, are still sitting on their eggs. Countless songbirds live in these trees. Nesting season is in full swing.

“This activity should be protested to your Supervisors, the Parks Commissioners and to the Recreation and Parks Department.”

Please protest. The SFForest website has a “Political Action” tab with relevant addresses and emails.

[Click HERE to go to relevant address and email addresses for Supervisors, the Parks Commissioners, and the Recreation and Parks Department.]