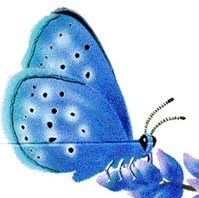 Last year, journalists were celebrating the return of the Mission Blue butterfly to Twin Peaks. From the SF Chronicle of 7 May 2010: “Everyone comes back to San Francisco, including, on a bright morning on Twin Peaks, the endangered mission blue butterfly.” It went on to say, “Last seen within city limits 30 years ago, the iridescent blue butterfly was spotted Thursday morning flitting about a Twin Peaks hillside…”

Leaving aside the issue of when the Mission Blue was last seen at Twin Peaks (1997 actually and one each in 2001 and 2004),  we wondered whether the single butterfly proved anything much.

The butterfly used to live on Twin Peaks, but it’s not clear how stable the population was. By 1997, only ten butterflies were seen. After that, hardly any were until the recent reintroduction attempt. Some blame the warm wet El Nino conditions of 1998 for a fungus that nearly wiped out the silver lupine, a key host plant for its caterpillars.

This “return” was the result of a complicated reintroduction, starting in 2008 with establishing patches of lupine, the host plant on which this butterfly lays its eggs. In spring 2009, the reintroduction team (which was led by SF Rec & Parks — SF RPD) brought in 22 pregnant females, and caged them over suitable lupine plants to lay their eggs.

We recently got SF RPD’s October 2010 report on the Mission Blue reintroduction. The team had counted 147 eggs laid in 2009. Over the following months, through end-May, they actually saw a total of 17 butterflies: 6 female, 11 male. Extrapolating, they thought there could be perhaps 20 butterflies this year; the number was unlikely to be as many as 50. [ETA June 2011: Before releasing the 60 butterflies in April 2011, they did check to see if any butterflies descended from the previous release were around. They spotted 2 males. ETA Feb 2012: We asked SFRPD for their observations. They actually spotted 7 butterflies pre-release, 5 males and 2 females.]

Is that success? The report considered it so, mainly because it demonstrated that the butterfly could go from egg to adult on Twin Peaks.

Mission Blues can’t reproduce without lupine, the only plants their caterpillars will eat. This plant (actually three varieties of it) grows best in disturbed areas. Once the area settles down, natural succession converts it to chaparral, or other invasive plants take over. Patches of lupine are generally on the move.

The Natural Areas Program (SF NAP, the part of SF RPD that’s responsible for Twin Peaks) is maintaining a lupine-friendly habitat by removing shrubs, including the native coyote-brush. The implication, though, is that this intervention will be permanent and ongoing. They will always need to garden for lupine.

While the lupine is critically important to the caterpillars of the Mission Blue, the adults need nectar sources. The butterflies are short-lived (7 days on average for males, 8 days for females) and don’t fly far. Fortunately they aren’t as picky as their larvae, and one of their key nectar sources is an invasive non-native Italian thistle: Carduus pycnocephalus. This grows widely on Twin Peaks, and SF NAP is not trying to remove it for now, until they can plant enough native nectar sources.

In attempting to maintain this lupine habitat for the Mission Blue, SF NAP has been using toxic herbicides: Garlon (triclopyr) and Roundup or Aquamaster (glyphosate). Both have been used all over Twin Peaks.  (Our article about the effects of Garlon is here.)

PROBLEM ON THE PEAKS 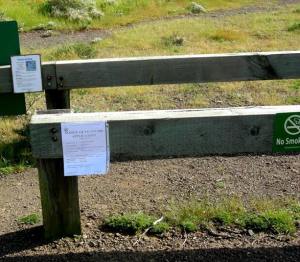 We have to wonder whether the success rate (egg to butterfly) will be similar to the 2009 batch — around 14% of the eggs becoming butterflies.   Though SF Rec and Park believe that Garlon isn’t harmful to insects, there really isn’t any way to tell. The studies on triclopyr relate to adult honeybees. Whether the chemicals — both the triclopyr and the “inert” chemicals used with it — will be non-toxic to caterpillars, we don’t know.

[ETA, March 2012: A study of the effects of Triclopyr and other herbicides on Behr’s Metalmark butterflies indicated adult butterfly emergence fell by 24-36%. Is it the same for Mission Blues? We don’t know.]

Mission Blue caterpillars hatch from eggs laid on lupine leaves (new leaves are preferred). They eat the leaves, then climb down into the dead leaves or ground beneath the lupine plants, and go into a sort of hibernation, called “diapause.” After emerging from diapause, they continue feeding, then pupate and emerge as butterflies between March and June. This life-cycle takes a year and brings them into contact with the soil. If that’s been contaminated with Garlon (which can remain in dead vegetation for up to two years) it could poison the caterpillars and reduce the chances of success.

What we don’t know is whether the use of Garlon favors Argentine ants by having a negative effect on ant pupae — thus giving the more competitive ants a clearer field. [ETA: Just read an interesting post on the blog Golden Gate Park: Views from the Thicket about an ant study conducted in August-Sept 2006, published in 2008. Argentine ants were present but not invading the parks. Hope it’s still that way. The study is here (as a PDF): argentine ants san francisco research – Clark Fisher- LeBuhn]

BY THE NUMBERS: UP, DOWN, OR SIDEWAYS?

We find the numbers interesting, and perhaps indicating less success than the optimistic journalistic stories.  The report suggested that the imported females may have already laid half their eggs back home on San Bruno Mountain, so the 20 or so butterflies came from only the second half of the eggs. (So maybe if they’d laid them all at Twin Peaks, and the same ratio had succeeded, there’d have been say 40 butterflies, with maybe 12-15 females. Down from 22.)

The introduced Mission Blues were caged over selected lupine plants to lay their eggs; their descendents selected their own sites. A survey in February and May 2010 found 42 eggs. The observers saw more than that, but the sampling method they used didn’t permit counting them. Still, it’s not an encouraging number. Unless they’ve missed 70% of the eggs, there are fewer eggs in 2010 than in 2009. At 42 eggs, they’ve got 7 eggs per observed female, about the same ratio as in 2009 (which was 147 eggs from 22 females).

This population is clearly dwindling.

At this size, the population isn’t viable. Here’s why:

1. The dating game. These insects don’t live long (about a week), and they emerge between March and June. The males usually hatch earlier than the females, which is a good idea when there are lots; it means they’re ready to mate the females as soon as they hatch. With only a few butterflies, though, the males could die before the females arrive. Some females might not find mates at all, and thus not reproduce.

2. Inbreeding. Having such a tiny number increases the chances of the mating pair being siblings. They could lower their breeding success.

3. Bad luck. Anything could upset the numbers still further — birds, rodents, bad weather — and wipe out the colony. The small number means there’s no buffer.

4. The fungus remains. The fungus blamed for killing the lupine in 1998 remains in the soil of Twin Peaks, according to a Fish and Wildlife report. This could mean adverse weather could again kill off the lupine — and the butterflies.

The plan now is to move 25 more female butterflies from San Bruno Mountain (assuming US Fish and Wildlife Service gives the permits).

[Edited to Add (24 April 2011):  According to the SF Chronicle, they are relocating “dozens” of butterflies now. There’s a photograph at this link.]

It may be a long haul, establishing the Mission Blue. The Recovery Action Plan Document (from SF RPD) indicates that in the UK and US successful reintroductions took an average of 11 attempts — and 15 years.

9 Responses to Twin Peaks and the Mission Blue Butterfly: Why it’s Still Uncertain