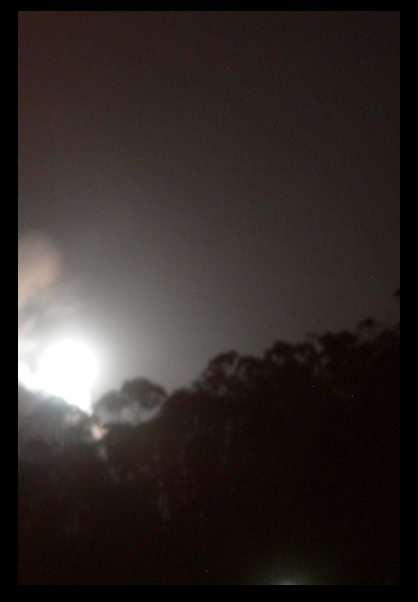 On 19 March 2011, there was a “supermoon” when the moon looks much larger than usual. This happens when the full moon is also at the point in its orbit when it’s closest to earth. (Technically, according to wikipedia, it’s a perigee-syzygy: The “perigee” refers to the moon in its orbit being at the closest point to the earth, and the “syzygy” in this case, to its being a full moon. [ETA: Here’s the definition of syzygy from astronomydictionary.com:  “An alignment of three celestial bodies. ” So a full moon, when the sun, earth and moon are approximately aligned, qualifies.)

It was certainly brighter than usual, and unusually we had clear skies (mostly) to see it. And then, early in the morning, we caught it setting over the shoulder of Mount Sutro, amid forest and cloud.

A pocket camera couldn’t capture the grandeur and the drama. Even so, we  invite you to look at the picture and imagine (or remember, if you saw it) how silvery and dramatic the scene was.