Garlon, Natural Areas, and the City

San Francisco’s Department of the Environment (SF DOE) is our second line of protection against chemicals after the EPA; it regulates the use of pesticides on all city properties. We attended their monthly meeting yesterday, mainly because Lisa Wayne, the SF Rec & Parks Open Space Manager, was making  a presentation about “balancing community values in managing San Francisco’s Natural Areas” in response to some of the community outcry against the use of Garlon in Glen Canyon Park.

After emphasizing the importance of the remnant areas of native plants, she said that grasslands in particular are the most fragile and difficult to restore. The native plants they want growing there — such as iris — are difficult to grow in nursery conditions, and even more difficult to maintain when planted out. The plants they don’t want there — like the oxalis — grow with enthusiasm. Though SF Natural Areas Program annually uses about 10-15,000 volunteer hours mainly for weeding,  the plants they object to keep coming back. Hence their need for Garlon, despite its toxicity. It kills the broadleaf plants while sparing the grass and iris. 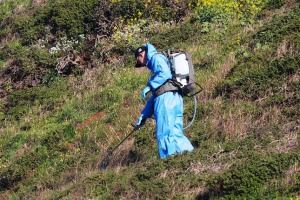 She acknowledged that the Glen Canyon neighbors have been concerned about the spraying of Garlon; the canyon is heavily used by small children (including preschoolers) and people walking dogs. [Webmaster: In fact, “Glen Park Naturally” a group of neighbors have started an online petition against pesticide use. The link to the petition is here.]

In part, Lisa noted it was a communication problem; though the spraying is done by people with backpack sprayers [webmaster: as in this picture taken on Twin Peaks] some people had the impression that there would be broadcast spraying of the entire canyon. Someone else pointed out that since the oxalis covered broad areas of the canyon, such an assumption wasn’t unreasonable. 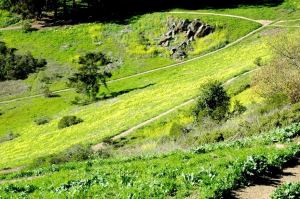 She said they would implement the following actions in response to the neighbors:

However, she pointed out that conditions had to be just right, and more often than not, spraying was canceled or postponed. They would be careful about noting when the spraying occurred post facto.

Some audience members wanted SF RPD to give these decisions in writing, to communicate with concerned citizens.

Speaking from the audience, we also mentioned an email someone forwarded us. It was a response from Dow AgroSciences (which makes Garlon) to the question, is it safe to use where children play? Dow’s answer was that Garlon was a vegetation management product, “in areas such as wildlife openings, forestry sites, along roadways, in ditchbanks, etc.  It is not a product that is used in residential areas.” It went on to say that the “restricted entry interval is 12 hours. So, after 12 hours it is okay for people and pets to enter the treatment area.” (The letter ended with a disclaimer that was actually longer than the letter…and included the words, “No warranty, express or
implied, is given and all warranties are expressly disclaimed, including but not limited to fitness for a particular purpose…“)

At present, Garlon spray warning signs say entry is okay “when dry.” Of course, since the time and date of spraying aren’t always posted, we have no idea how to find out when it’s dry. (Lisa said the people applying it usually stay around until it dries.) In any case, we suggested they consider the manufacturer’s suggestion for a 12-hour safety interval from the time of spraying.

Lisa also said they’re looking for an alternative to Garlon because it’s so toxic, but they haven’t found one.

On some occasions in the last year, SF NAP (or contractor Shelterbelt) have used Roundup and Garlon in combination. We are concerned about this, because we’ve been able to find very little information about synergistic effects — and at an earlier meeting, Chris Geiger of the SF Department of the Environment had pointed out that not only was it unknown, it was unknowable.

Lisa said they did not intend to use combinations going forward, even if they had occasionally done so in the past.

A speaker from the audience proposed to Chris Geiger that using such combinations should require special justification as an exception. Based on the precautionary principle, SF DOE should regulate their use.

[Edited to Add (March 15, 2011): They confirmed by email with this: “The Natural Areas Program will not be combining Garlon and Roundup in simultaneous spraying in the future.” It was signed by Lisa Wayne, Natural Areas Manager. Thanks, Lisa.]

Another member of the audience asked if  in Glen Canyon and elsewhere,  was water being tested for pesticide contamination? She mentioned that in a California test, of 227 samples, 11.4% contained triclopyr. Chris suggested tests were increasingly sensitive to chemicals, so detected levels could still be safe. There was some discussion around SF PUC testing for herbicides. Apparently they do test for herbicides among other things.

CHANGES TO THE IPM

Afterward, Chris mentioned that they were changing the posting requirements for Tier III chemicals (the safest ones) to permit posting only on the day of the spray, as an incentive to use these rather than the more hazardous Tier II and Tier I chemicals. (Pesticides permitted by SF DOE are divided into three categories, with Tier I the most hazardous and Tier III the least hazardous. Garlon is Tier I; Roundup is Tier II.)

He also said that SF Department of Environment would soon have a new website, which would give information about pesticide use. It  would also be possible to send in complaints and concerns. He got several about Glen Canyon, especially from parents who enjoyed the kid-friendly “sourgrass” — the common name for oxalis. Kids like to pluck and eat it.

3 Responses to Garlon, Natural Areas, and the City