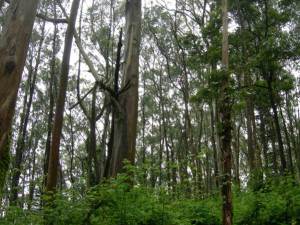 Alicia Snow sent us this lyrical piece about walking the forest’s trails for over 30 years. Though she doesn’t walk alone there any more, she still fights to preserve Sutro Forest and against the use of toxic herbicides in the area.

I grew up in San Francisco, having flown here on an old troop transport propeller plane in December of 1945.  I was six weeks old and my mother and I had just been “cleared for takeoff” so we could come home from the Army Hospital where I had been born.  But it wasn’t until 1977 that I discovered Sutro Forest.  My husband and I had been house hunting.  We had come to this neighborhood for the first time.   We liked what we saw, and bought the house that was advertised. 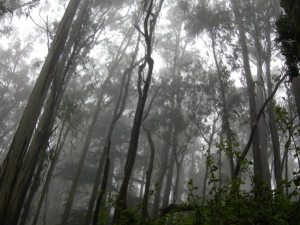 The day after we moved in, I decided to explore the forest.  I walked up Shrader Street to Belgrave, and went into the forest at the top of Stanyan Street, for the first of about 11,300 walks I was to enjoy in this craggy mountain top.  I loved it up there from the very first.  I used to say that it was my church.  I walked those trails in the rain, and in the sunshine, and, of course, mostly in the drippy, misty fog.  I loved it unconditionally.  I never felt afraid there among the trees.  The forest was my friend.  There was a sense of aloneness, but not of isolation.  Sometimes, in the heavy fog, the forest was silent, and I felt a thrill of primitive communion with all the things that grew around me.  In the spring, it was alive with birdsong.  There were butterflies everywhere.  In the winter I could hear the little creek gurgling at the bottom of the canyon that ran east of Edgewood Avenue.  I got lost a few times, and found overgrown little trails that were probably not used by humans, but I always managed to find my way back to civilization before too long.

For the first twenty of those years, I seldom encountered anyone.  And when I did, it was a friendly surprise, both of us having thought the forest was our own special secret.  Sometimes, I just went from Belgrave to Edgewood via the long rocky trail that led past the chancellor’s house.  Sometimes, I headed up to the summit.  I circled around, went off trail, climbed down to the creek and back up.  I got to know every corner of the forest in all those thirty-one years.

One day, as I followed the trail, I came upon a very old lady, dressed in black, and holding a cane.  She was sprightly and chatty.  She told me that she had lived in the neighborhood for eighty years.  Her name was Eileen Coffee.  She could recall when the trail  had been used as a bridle trail.  Now, she felt it was good exercise for her to walk from her home near Clarendon to the UCSF campus where she took an exercise class and went swimming, three times a week.  I saw her several times over the next year or two – and then not again.  I used to think, “Some day I will be like her, still walking in the foggy forest.  Still loving it.

The forest gave me many memories.  Once I was walking with my old German Shepherd on the trail that ran just behind the chancellor’s house, and in those days the trail was broken in one spot.  It was necessary to be a bit nimble to jump from one rock to another.  I was on the wrong side of that rocky break when my big dog suddenly collapsed.  I thought he was dying.  I stood there anxiously thinking, “Oh, Lord, I can’t leave him, and I can’t carry  him, and I never see anybody here.” I didn’t know what to do. But suddenly two  young men were standing before me.  I don’t know where they came from.  They appeared like a couple of angels out of the blue.  I couldn’t believe it.  They were young medical students.

I said I thought sure he would.  And the two of them lifted my 90 pound dog in their arms and carried him over that treacherous break in the trail to the little clearing near the bus stop where they stayed with him while I ran all the way  home and brought my car to take him to the vet.  My dog survived.  I never saw those men again, and I had never seen them before.  But I will never forget them.

Another time I will always remember was a day when I was running up to the summit very early one morning.  It was sunny, and as I came to the top of the  hill, my breath was taken away by the way the sun was refracted through all the trees that used to be at the summit.  The light came in a starburst through the trees and onto the ground.  If I had been a primitive being, I would have taken this as a sign from heaven.  It was simply beautiful.

I used to run very early in the morning, and during the winter one could hear the owls in the trees going up to the summit. For months I used to see one great horned owl who would hoot a greeting when I came up the hill with the golden retriever I had then.  I always looked for him.  And then I found him dead on the road one day.  He looked perfect.  There was no blood.  No animal had attacked him.  His eyes were wide open in death.  He must have been poisoned.  Probably he had eaten a rodent that was poisoned by the housing area people.

The forest is a whole different place at night.  I have been there in the dark with a flash light helping people find their dog.  It was very quiet except for our voices calling.

For many years, I used to meet a UC gardener  called Tim Lipinsky out there maintaining the trails.  He loved gardening.  When he went home from his job, he cared for his own huge garden, and he worked in other people’s gardens for extra money. He often came and helped me with things that were too heavy for me.  He single-handedly cut in a flatter trail that led down to Edgewood because he felt the old one was too steep and slippery.  He always had something to teach me about what was growing out there, or what had come into bloom.  He retired and moved away.  I miss him.  He really loved the forest like I did.

I don’t go there any more.

I began to run into strange people there from time to time, and I became concerned.  Guys playing with themselves.  Little altars of stones and skulls. The occasional squatter who left girlie magazines in the mud.  And then on Mothers’ Day of 2009, I was confronted by a psychopathic man who yelled and screamed obscenities at me and threatened to kill my dachshund puppies because he “hated little dogs”.  My dogs were on leash because they were so  young, but he was full of malice anyway.  I stood there trembling while he abused me with his towering rage.  He made it impossible for me to get past him on the trail until he decided to go.  I have never felt so vulnerable.  I said to myself, this is a warning.  I had thirty-one good years here. I’ll leave well enough alone.

The times they are a-changin’.