It’s raining now, the evening of Monday Oct 12th. This may herald the beginning of winter’s wet weather.

In October we had the longest stretch of fogless rainless weather – seven days. In recent days, we’ve had high clouds, but not the kind the forest could catch the moisture from. In fact, yesterday, Oct 11th, may have been the driest day in the forest. We were there.

Around on Sunday afternoon, it was a surreal experience. The forest was beautiful, full of bird-sounds and jet-roar. The Blue Angels were zooming by behind the eucalypts (but they weren’t holding still for the camera).

Damp beneath the surface

Anyway, we were on another mission: to see what the forest looks like when it really dries out.

The mud puddles were gone. The squishy mud was gone. All the paths were dry.

But when if you kicked at a rut, it came off in clods of mud, revealing damp earth underneath.

Kicking up dust in the Native Garden

The only places that were dry and dusty were where the forest had been opened out – like the Native Garden. There you could actually kick up dust.

The rest of the forest was green and growing, with a high moisture content. 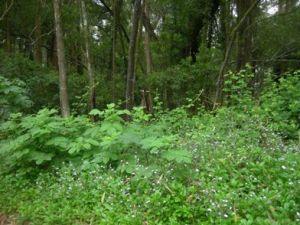 Greenery on the driest day

Edited to add: It’s mid-day of October 13th now, with rain and wind. I’m standing looking at the stately dance of the forest as it waves in the wind. It is a thing of ethereal beauty. If I had video I might show you, but nothing would capture the scale and grace of these amazing trees.