Opening up the Mt Sutro Forest has had the effect of increasing fire-risk. This is the evidence from the trail-building in the forest over the last few years. So why is UCSF planning to open it up much more?

We learned that the fire-risk map for Mt Sutro had been updated in July 2009. The one in UCSF’s FEMA application dates back to 2003.

That’s shown here on the first map. The only two fire-risk areas on the mountain are the treeless Native Garden on the summit, and the Crestmont Hills project area in the Forest Knolls neighborhood, where the trees were removed because a developer was hoping to build there. 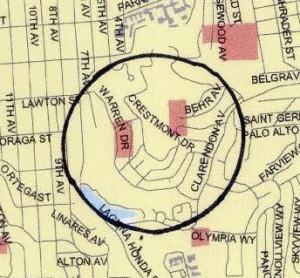 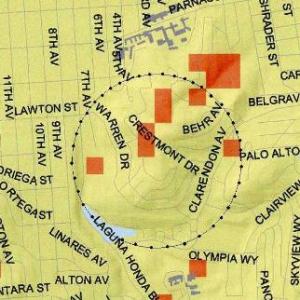 The second is the July 2009 map. There are several more fire-risk areas:

The new spots: The Community Garden off 7th Avenue, near Laguna Honda lake; the West Ridge; the North Ridge; an area below Johnstone near the Fairy Gates Trail.
The old spots, the Native Garden and the Crestmont Hills Planned Development no longer seem to be at risk.

In this century-old forest, the only major difference in the last few years has been the opening of a number of trails. While the trails provide access to users of the forest they also have the effect of drying out the forest (because the duff that holds the moisture is removed right down the soil surface). Trail-builders also leave flammable material around.

With this evidence front and center, UCSF now plans to open up the forest still more, making it even more flammable – in areas where there are no red patches yet: South Ridge and Edgewood.

I walked yesterday in the Interior Greenbelt (which is contiguous with UCSF’s Sutro Forest, on the eastern side). It felt like a field experiment in opening/ drying.

Near the beginning of the trail (going right from Belgrave) there are large open sections – in some cases, so open you can see Cole Valley and the neighboring home. Here, the trail was dry and slippery with leaves and dust.

Further in, where the forest became denser, the trail was damp. Same forest, same day.

UCSF should really reconsider the way it thinks about this forest.