San Francisco, at the time when Sutro planted the historic forest, was a world of windblown sand that got into everything, including residents’ lungs. 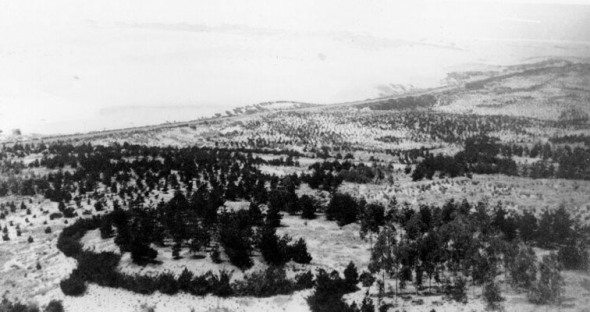 We received a letter from a San Franciscan who has “a small San Francisco library and enjoy[s] its history.” It contains an extensively substantiated description of San Francisco before the tree-planting and the building of Golden Gate Park.
————————————————–
“San Francisco being a narrow tip of a spit of a peninsula with the Pacific on one side and a huge bay on the other side did not provide the type of environment the nativists seem to think. It appears that S.F. was one sandy and dismal place throughout most of the city until the park tamed much of the dunes.

“The “Significant Natural Resource Areas Management Plan” states that it was “maybe” like San Bruno or the Marin Headlands. Clearly, from what I read of early San Francisco, that is not the case. Sand seemed to permeate everything throughout the city.

“ If ever there were a location to place a grand city and do minor environmental harm,” he concludes, “S.F. was the place. To think that the nativists want to turn back the clock is so laughable that it is shocking that it might be reality.”

He provided five separate pieces of documentation that make fascinating reading. For those interested, they are given below.

———-
1) “The ultimate authority of early San Francisco, ‘The Annals of San Francisco,’ provides a very bleak picture and underscores the lack of vegetation.” (1855)

Part Second, Chapter 1; excerpt: (my notes—tip of the peninsula, entrance to Gate)

“On this subject it may be stated that all the shores in the mouth of the bay are liable to be washed off every year, by the combined strength of wind, tides, local currents, and floods. In the great freshets of spring 1825 more than fifty yards of land were swept away to the westward of the fort.”

“The depth of the water on the bar at low tide is considerable enough to permit the largest ship of war to safely cross it. The strait itself has a depth varying from five or six to sixteen fathoms and upwards. The shores are bold and rocky, and in some parts precipitous, swelling on the north side into mountains of upwards of two thousand feet in height.” (my notes—north side refers to Marin County) “On both sides they are quite bare and barren. The strong winds and heavy fogs which constantly assail them, and their own sandy or rocky nature, have effectually prevented trees or luxuriant vegetation of any kind from growing.”

….”As he approaches the strait from the south, the voyager has seldom perhaps seen so dismal a looking place. A multitude of low, bleak sand hills on the sea shore, often swept over by flying clouds of dense mist, first greet his eyes.”

“If the plain truth must be told, the cove of Yerba Buena was a dismal thing to look on in those early days. The beach was right enough, but to the westward stretched a wilderness of desolate, forbidding sand dunes, often shifting their positions overnight. When one considers that many of them were 100 or more feet high, one can realize the uncertainties of the landscape. When the trade wind blew in fresh from the ocean, it carried with it an almost incredible burden of both fine and coarse sand that got into clothes, eyes, nose, mouth—anything that was open in short—besides penetrating the innermost recesses of a household. Only sound lungs were proof against the accumulation of sharp, gritty material daily inhaled. In fact the place long had the reputation for unhealthfulness, not entirely undeserved, until the leveling of the dunes and the reclamation of the park tract checked the shifting sands for good.”

Excerpt from “Eliza Woodson Farnham shows her disdain in this excerpt from her 1856 book, California, In-doors and Out.”

Describing her trip from south of Santa Cruz (quite beautiful) north to San Francisco ( an awful place):

“On either hand you have heather wastes intermingled with flowering shrubs, many of which, in their seasons, are very beautiful. At this time all the more productive regions were sparkling with the flowers common to the country, chief among the eshcholtzia, purple and blue lupin, columbine, white and variegated convolvuli, fleur de lis, white lily, and innumerable smaller flowers of exquisite beauty, with whose names, being no botanist, I am unacquainted. “….

“Yet a ride through the valley is one of the most charming in the country, so fertile is it—so adorned with the orchard-like trees that take on new forms in their groupings from every point of view by which you approach or recede from them. It only begins to be disagreeable when you reach the hills some ten or twelve miles from San Francisco, and grows constantly more so till you reach the same point on your return. Here the San Francisco winds meet you face to face, and search you like an officer of the customs. They grow more unpleasant till you enter the city, by which time you are thoroughly chilled and dampened by the humidity with which they have been charged. Your eyes, ears, nostrils, and mouth are filled with the sand they have hurled at you, and you just begin to remember that out of Santa Cruz one must expect to encounter many disagreeable things that one has entirely forgotten the existence of in that delightful spot.”

“San Francisco, I believe, has the most disagreeable climate and locality of any city on the globe. If the winter be not unusually wet, there is some delightful weather to be enjoyed. If it be, you are flooded, and the rainy season closes to give place to what is miscalled summer—a season so cold that you require more clothing than you did in January; so windy, that if you are abroad in the afternoon it is a continual struggle. Your eyes are blinded, your teeth set on edge, and your whole person made so uncomfortable by the sand that has insinuated itself through your clothing, that you could not conceive it possible to feel a sensation of comfort short of a warm bath and shower by way of preliminaries. ”

3) “Early MUNI travails because of SAND all the way even to third street from Hayes Valley.” (1860)

“Then on July 4, 1860, service was commenced on the city’s first street railway….extended out Market to Valencia, and ended on Seventeenth Street. Of problems encountered by that pioneer venture, one of its owners later recalled that:
‘The entire line of Market Street from Hayes Valley to Third Street was a succession of sand hills…After they were cut through and the railroad started, we had much trouble keeping the sand off the track. The cutting, for economy’s sake, was narrow, and, as the sand dried in the embankments, it slid down and covered the tracks. This difficultly was finally overcome by the use of brush or scrub oak, which was used as a short thatch that covered and held the sand.”
———-

4) “Not even the native-Americans deigned to live here–it was much too desolate.”
Source: Mirror of the Dream By T.H. Watkins and R.R. Olmstead; Scrimshaw Press, 1976

Prologue… “In the northeast corner of Golden Gate Park, otherwise a monument to the wonderful changes that can be wrought by men who have a visionary purpose, stands a little copse of stunted, windblown oaks—a thoughtfully preserved remnant of the original climax vegetation of the windswept peninsula that became the city of San Francisco. Some of the Indians who lived in the hills of Oakland and Marin and San Mateo must have known these oaks. They were a people who seem to have been fond of excursions, for we know something of their making of the tule canoes in which to cross the bay, but there certainly was little to keep them long on the desolate hills hereabouts. The natural setting of San Francisco is magnificent only to a people with a dream and purpose associated with a whole world of geopolitics and commerce, and only in this setting of the mind could the site of San Francisco acquire a meaning and a history. To the thoroughly practical folk who occupied the Bay Area for thousands of years before white man, San Francisco was not even a particularly nice place to visit.”
———-
5) “A collector’s book promoting S.F. because of the diversity of trees and John McLaren’s park.”

“The trees and shrubs of the park have been brought from all over the world—from various parts of North and South America, Siberia, China, Japan, Australia and Africa. It is claimed that no other park has so great a variety of trees, the temperate climate of San Francisco supporting the plant forms of all but torrid countries.

To the energy, taste, and enthusiasm of Mr. John McLaren, for many years park superintendent, is largely due to the miracle of making the wind-swept sands into a garden of rare beauty.”

This entry was posted in Uncategorized and tagged native plants, sutro, Sutro Forest. Bookmark the permalink.