This website was set up only in 2009, and except for a few pictures of San Francisco in the old days, most of our photographs come from June 2009 or later.  Hiker Tony Holiday (who blogs at Stairways are Heaven) shared with us some pictures from before that – between 2004 and 2006. We publish them here with his permission, to recall the beauty and density of the forest before most of the “work” started and before most of the tree-felling started. (Later on, we’ll publish some 2007 pictures of the forest as well.)

This is Medical Center Way, a paved road that runs north-south through the forest and connects the Aldea Student Housing with the UCSF campus. The beautiful eucalyptus trees festooned with ivy come right up to its edge. 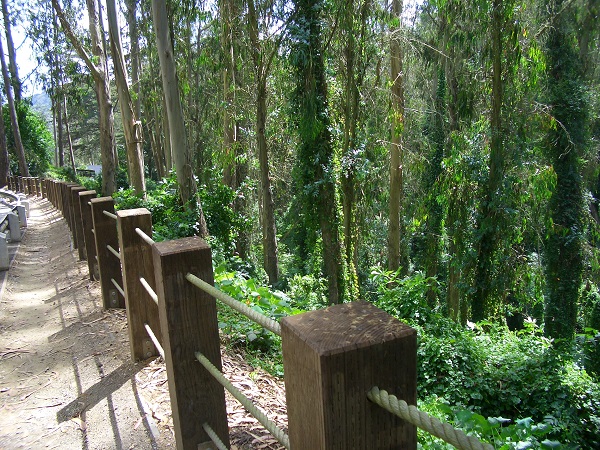 Here’s the summit garden in 2004, with flowers in bloom. 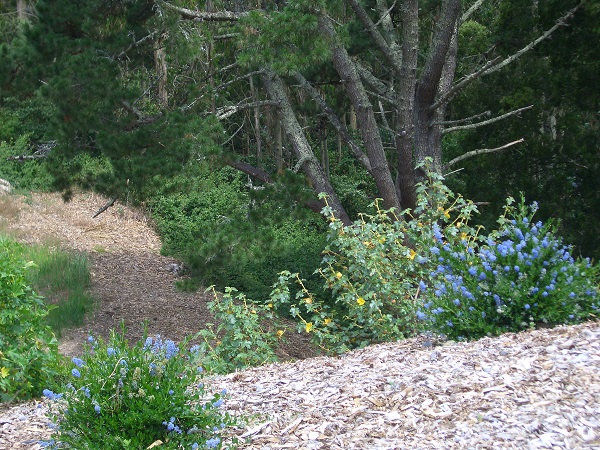 Here are more wildflowers, also from May 2004.

“What a change from now – same place !” commented Tony. He’s right. The summit seldom manages to look like this any more. In the early days of the garden, an extensive irrigation system was installed. (You can see the pipe in the picture above.) They stopped irrigating it after 4 years, we’ve heard. This must have been while it was still being watered. For contrast, here’s a picture taken in May 2010.

And here’s yet another from 2004 – a lovely nasturtium understory under the eaves of the forest. (The nasturtiums need no watering.)

This is the trailhead from Crestmont, in the Forest Knolls neighborhood, in 2005. 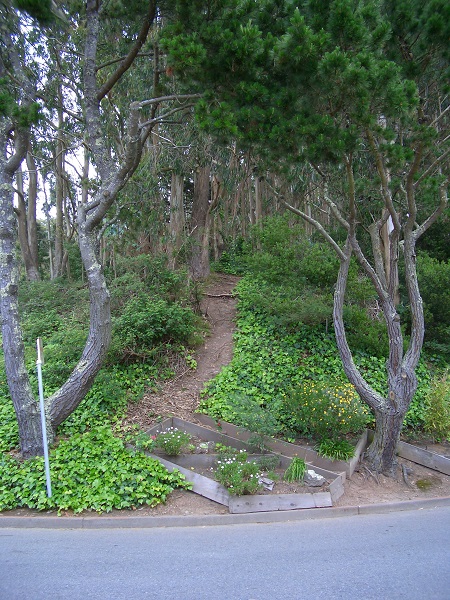 Another view of the trailhead, showing the wooden steps and flowers planted beside them. A graceful entrance to the forest with trees standing sentinel on either side.

And here are two from Medical Center Way again, still looking like a woodland road under a tree canopy. 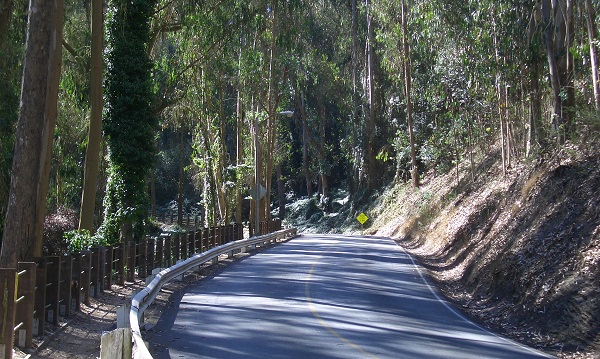 MORE PICTURES FROM YEARS AGO

Here are some lovely Sutro Cloud Forest pictures from 2006. 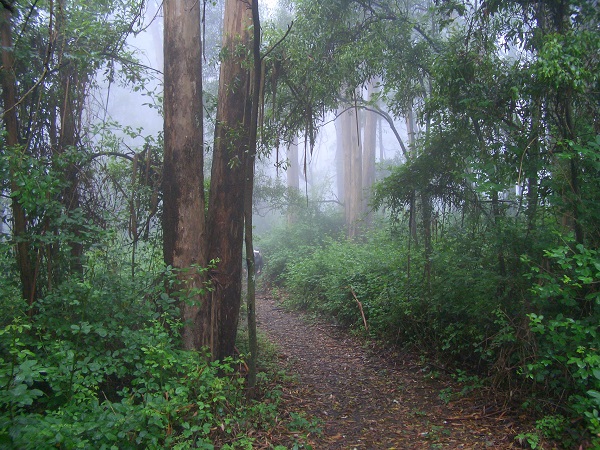 The hiker half-hidden behind the tree gives a sense of scale and mystery. The picture below, taken in July 2006 shows how lush the forest used to be before the “thinning” started.

These rocks are the Fairy Gates that give the Fairy Gates Trail its name. (One of the originators of this trail, long before it was tidied up and reopened, objected to the name. He called it the Topo Trail.)

Here’s a view of the UCSF Chancellor’s Residence through the trees. With the forest at its back and a view over the city at the front, it must be one of the best houses in San Francisco.

Another pretty trail picture from 2006:

A view of the trailhead off Medical Center Way

And the steps leading down to the UCSF campus 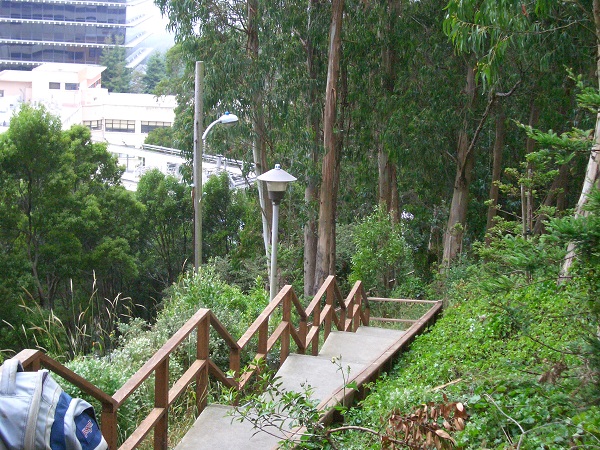 “Back when I went on these group hikes they were just opening the upper Historic and Mystery Trails to the public. The lower Historic had not been opened yet.” – Tony Holiday

Tony also sent us these pictures from a group hike: 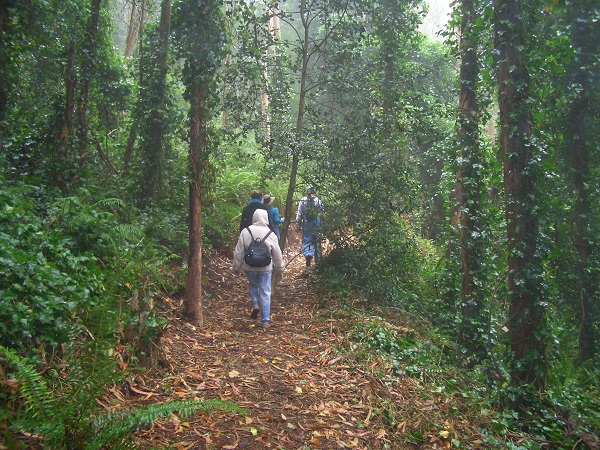 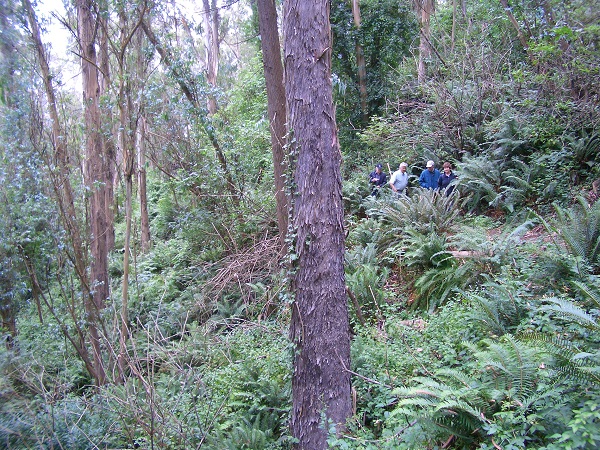 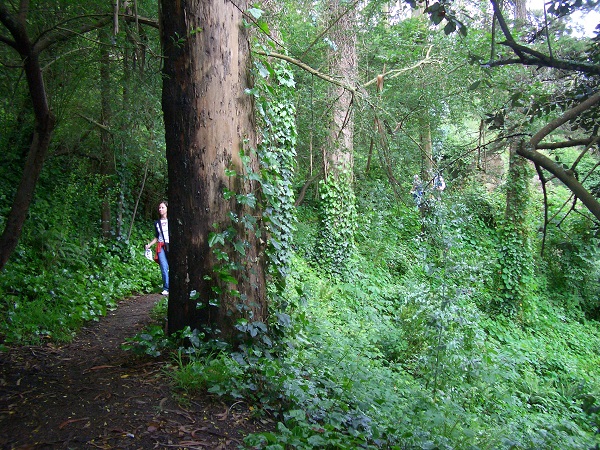 “Back then I took group hikes and was totally innocent re efforts planned to thin out the forest !!” – Tony Holiday

Thank you, Tony, for this time machine. It reminds us of what the forest could be again if they stop fighting resurgent nature.