This post is republished with permission and minor edits from the website of the San Francisco Forest Alliance. We think it is of particular interest not only because of the myth-busting, but because we were told for the first time that UCSF may do another round of “fire-safety” work in the forest. 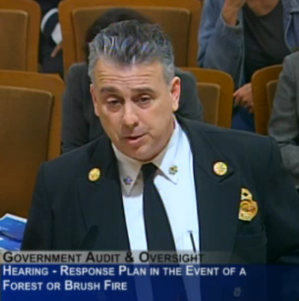 Recently, Supervisor Norman Yee called a hearing of the Government Audit and Oversight Committee to find out how prepared San Francisco was to deal with fires in brush and forest. The San Francisco Fire Department busted some myths we’ve heard all too often.

MYTH #1: The forests of San Francisco – in particular those on Mount Sutro and Mount Davidson – are a fire hazard. Vegetation fires are 12-13 times more likely to occur in grass and brush than in forests. And importantly – in the north and west of the city, the fog protects it by adding moisture. The south-east is more vulnerable to vegetation fires, particularly around the freeways. (But the real fire danger in San Francisco is from structure fires because of closely-placed wooden houses, not so much from vegetation fires.)

MYTH #2: As city fire-fighters, SFFD wouldn’t know how to respond to a forest fire. Actually, SFFD have 200 fire-fighters trained to fight vegetation fires. This myth is a quarter-century out of date.

MYTH #3: SFFD doesn’t have the equipment or information to fight vegetation fires. Actually, SFFD has special resources including four maneuverable “mini-pumpers” for fighting outside fires. And it has a mutual aid agreement with other cities and can call on their resources if needed.

We attended the hearing, and were impressed by SFFD’s well-planned arrangements. After an introduction from Supervisor Norman Yee who convened the hearing and Fire Chief Joanna Hayes-White who stressed that SFFD was prepared for vegetation fires, Deputy Chief Mark Gonzales gave a detailed presentation on where they happened and how SFFD handled it. This was followed by a talk about prevention from Lieutenant Mary Shea, (mainly weed-abatement in vacant lots and similar). The Department of Emergency Services’ Bijan Karimi described preparedness, to help affected families stay safe and return to normalcy in the event of any disaster. Then Curtis Itson, UCSF’s fire marshal, spoke specifically about Sutro Forest, and finally there were some comments from the public – including a singer!

WHERE THE OUTSIDE FIRES ARE

San Francisco’s main concern is actually more with structure fires, because as Deputy Chief Gonzales said, “…we have wood buildings in the districts, and they’re all next to each other.”

However, there are some calls for outside fires. They tend to be concentrated around the south and east of the city. Because of the fog, the north and west of the city (i.e., areas that include Mount Sutro Forest and Mount Davidson) are generally moist and not a concern.

[See our recent post,  Sutro Forest: Fog and Puddles While Elsewhere Fires Burn, for an illustration of this effect.]

The focus for outside fires is in the drier South east part of San Francisco: Hunter’s Point, McLaren Park. 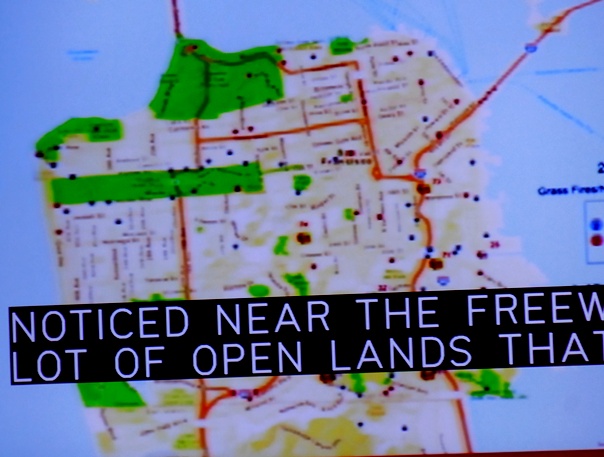 From the presentation by Deputy Chief Mark Gonzales:

“… we have fog and even during the drought [in] the rest of the city, the west and the northwest gets the fog. The best weather is in Hunters Point, southeast, so that’s where it’s driest. One of the concerns is Mclaren park. So the four mini-pumpers are in that area. We have front line stations in the city. A lot of those companies have been trained in wild land operations, and the chief mentioned that we have over 200 firefighters that do that.”

The open weedy area around freeways are also a concern. Thrown cigarettes and occasional campfires may account for ignition. He said: “…actually there is a big correlation if you noticed near the freeways… all along and open patches of lands that we respond to, to knock those out.”

When there are vegetation fires, they are mostly in grass and brush. The data the Deputy Fire Chief showed indicated that in the last three years, fires in grassland and/or brush were 12-13 times more likely than fires in forested areas/ wild lands.

He also pointed out that SFFD did have the resources to fight vegetation fires:

NOT A WILDLAND URBAN INTERFACE, AND ONLY MODERATE HAZARD

Lieutenant Mary Shea, who is responsible for Prevention, started by pointing out that San Francisco was not technically considered a Wildland-Urban interface, though there were pockets that appeared so. She also said that based on topography and fuel, CALFIRE considered San Francisco a moderate fire hazard area, not a high fire hazard zone. [“Moderate” is actually CALFIRE’s lowest rating. We wrote about that here: The “Fire Hazard” that Wasn’t]

Her prevention efforts therefore focused on overgrowth of weeds, grass and vines, 30-foot defensible spaces, tree-limbs within 10 feet of chimney outlet, buildup of leaves or pine needles on roofs.

They mainly responded to complaints from neighbors, perhaps half of which were justified and the remainder were people disgruntled with the next-door tree overhanging their house or yard. They usually sent out abatement notices two weeks before 4th of July. Owners usually complied and most yards were well-maintained – the owners didn’t want fires, either. The main problem was in abandoned properties where the neighbor could not be found, or people unable for some reason to maintain their homes. SFFD worked with such cases to ensure safety. Most notices came from Hunters Point/ Bayview around the freeways, and Bernal, places like that.

UCSF MAY DO ANOTHER ROUND OF “FIRE HAZARD REDUCTION”

Chief Joanna Hayes-White praised UCSF for the “fire safety” work 2 years ago, and they said they would be reviewing it this fall. She talked about defensible space and fuel reduction.

UCSF’s fire marshall, Curtis Itson, emphasized that UCSF has a commitment to keep buildings, visitors, and nearby neighborhoods safe.

In comments, we pointed out that given the fog and the way the vegetation trapped moisture, we needed to be careful that we did not increase fire hazard by reducing the forest’s ability to retain moisture.

[In August 2013, we think that UCSF and SFFD were stampeded into a rushed action. We hope that this year, with more time to conduct moisture studies and properly understand the terrain and microclimate, they will be able to take a more thoughtful approach that would preserve, even enhance, the moisture in the vegetation.]

If you want to view the hour-long hearing, here’s the LINK.