The July message from UCSF was both innocuous and concerning. They were going to do some “hazardous tree work” immediately… and more in the Fall.

UCSF must immediately remove some hazardous trees in the Mount Sutro Open Space Reserve in early July. UCSF arborists and external consulting arborists identified 20 trees that are dead and dying and need to be removed immediately to protect the safety of trail users, employees, neighbors and neighboring homes. We anticipate additional hazardous tree work will be done in the fall. 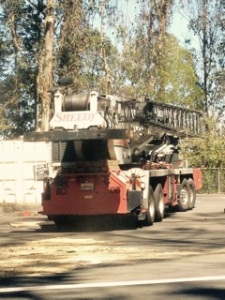 Even though it was the bird nesting season, UCSF went ahead with the work. To clarify: we support the removal of trees that are actual hazards especially to buildings, though we have to say that in the past, the trees removed have seldom been actual hazards.

What concerns us is that “hazardous tree work” is the latest in a series of excuses to remove trees.

WHAT ABOUT THE BIRDS?

What was even more concerning was this paragraph:

Really? It is impossible that birds would avoid Sutro Forest. They nest in the eucalyptus trees, in the others trees like acacia that form the subcanopy, and in the blackberry and other bushes. One of our observers who went to watch the work being done noted  “bird nesting in bushes around eucs at one end of the trail they closed to cut the dead eucs.”

We have asked for a copy of the wildlife biologist’s report.

UCSF appears to pay lip-service at least to avoiding tree-work during the nesting season:

It is UCSF policy to avoid any non-urgent tree work during bird-nesting season.  Bird-nesting season generally lasts from March to August or September, though there is some evidence that it started earlier this year due to the warm weather.

Our concern regarding birds is two-fold. First, clearly the “no signs of active nesting” reflects inadequate observation. There is no reason for birds to avoid nesting in Sutro Forest, which is resource-rich for birds – and even a casual observer saw this activity even while the tree work was going on. Second, in addition to the tree work volunteers continually remove bushes and understory shrubbery throughout the season. These are all nesting sites.

LOSING TREES IN THE FOREST

More “hazardous tree removal” is planned for the Fall. One supporter of the forest said, “…this constant tree trimming, killing and shredding will not stop in the Sutro Cloud Forest in San Francisco. Please stop immediately…”

It seems the current strategy in Sutro Forest is a process of attrition. In the last few years, hundreds of trees have been cut down -1250 by 2014, more in two batches in 2015. 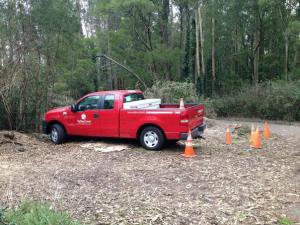 We would like to point out that even dead and dying trees are valuable to a forest; they provide excellent habitat for birds such as woodpeckers, and for wild bees. They also help maintain the cloud forest ecosystem by harvesting fog moisture and helping to preserve it.

Unless they are actually hazardous, UCSF should preserve them as part of the forest’s eco-system.

This entry was posted in deforestation, Mt Sutro Cloud Forest, UCSF and tagged birds, drying out the forest, environment. Bookmark the permalink.