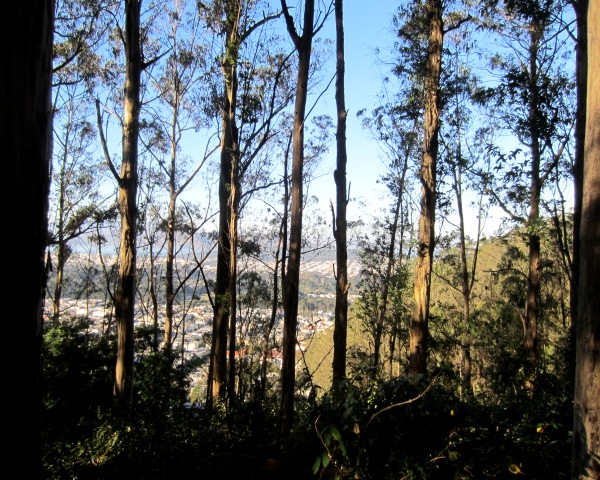 The unusual winter weather, with bright sunny days and hardly any rain, has drawn a lot of people to Sutro Forest. We’ve been up there a couple of times recently, and found an unusually large number of joggers, bicycle-riders, and hikers – even on weekday afternoons. If you would like to check it out yourself, our HIKING section is HERE. 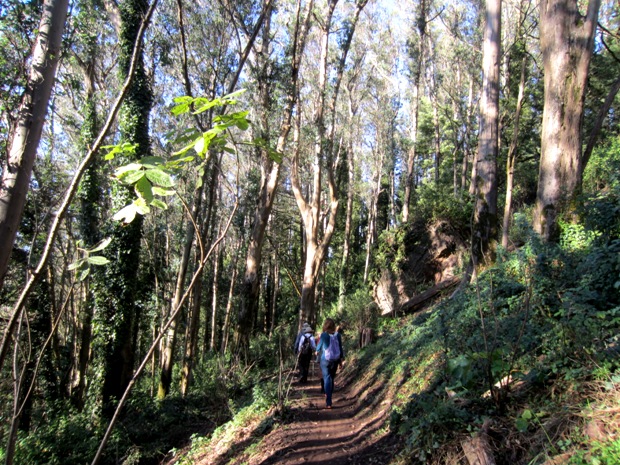 The trails are drier than usual, though some of the upper ones are damp and firm underfoot. If you’re a birder, you may want to bring binoculars. While waiting for our group to assemble, two birders saw a Peregrine falcon fly over, and the forest has other birds. 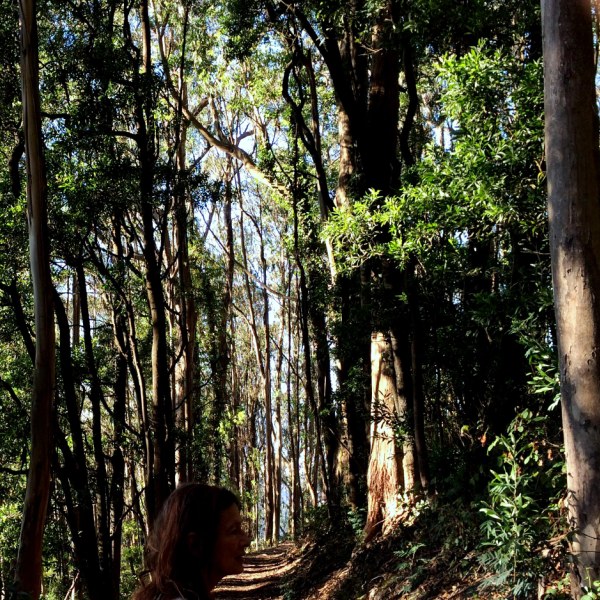 Much of the forest is very lovely and green, even though it’s much drier than usual. It’s taken a double-whammy. The extremely dry weather has denied it most of the rain it gets this time of the year. And a lot of understory has been cut back, reducing the forest’s ability to preserve what moisture it gets – the “sponge effect” by which forests take in water and release it slowly.

Some areas where UCSF did its so-called “Urgent Fire Safety” work in August 2013 are covered in wood chips, so they are dry and brown. But where it’s been left alone or the understory has had some chance to grow back, it’s beautiful. Even in this situation, the forest has been capturing and preserving enough moisture to keep its plants alive. 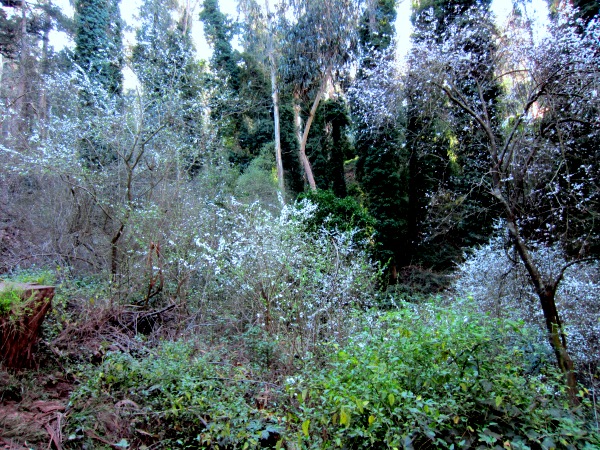 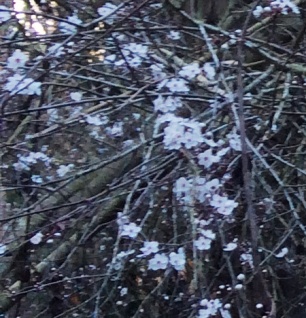 The plum trees are in bloom, covered in tiny white flowers. The Interior Green Belt (above Stanyan) has a number of these pretty trees (of which more later). They were very popular with birds, which were biting off the blossoms. Some bees were buzzing the flowers.

One of our visits was with “Trek and Talk,” that organizes (free) treks to places in the city. Someone identified the birds in the plum trees as Fox Sparrows and Song sparrows, and explained that the birds were probably eating flowers for the moisture. (They ate yellow oxalis, too, probably for similar reasons.)

[Edited to Add: It looks like Fox Sparrows aren’t on our earlier lists – HERE and HERE – so that brings the total number of species to 46 – and counting! A bird blog by Craig and Eileen Newmark, who live on the edge of the forest, has 48 species of birds, many of which are not on our list.] 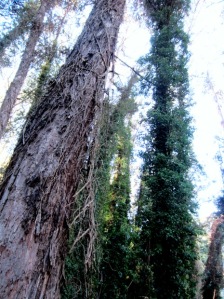 Paradoxically, the dry conditions and the thinner understory made it easier to spot birds. A Townsend’s Warbler crossed the path, and later we saw pygmy nuthatches and ruby-crowned kinglets in the eucalyptus trees.

The Cape Ivy and English Ivy growing up the columns of the trees – which is also being cut and allowed to die on the tree-trunks – is important as habitat. It provides cover for small birds, and nesting sites. It also blooms in winter, and provides nectar for insects and thus starts a food chain.

We think this is actually creating a fire hazard, rather than reducing one; the dry vine is more of a fire ladder than the live ivy that contains a lot of moisture. It’s certainly destroying habitat.

EVENING IN THE FOREST 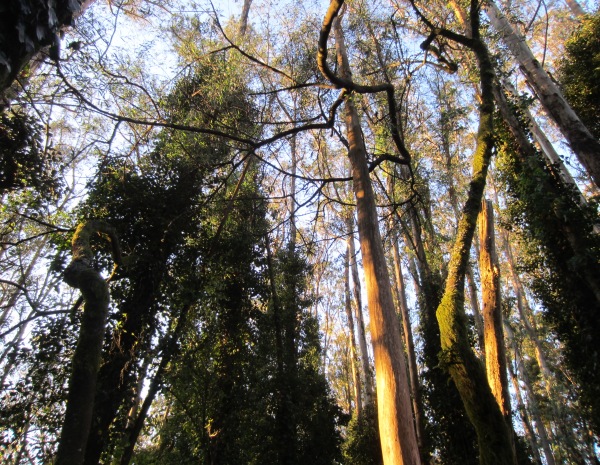 The forest is lovely at sunset these days, with the light turning red in the trees. 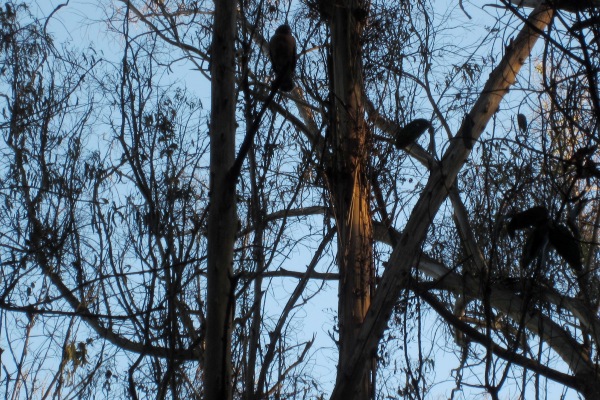 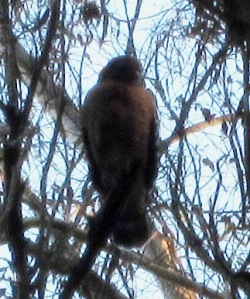 On another visit, we went in the evening. This hawk sat unmoving in a tall tree; it’s probably a red-tail though without binocs, there was no way to be sure. Here’s another crop of the same picture, in case someone wants to take a stab at identifying it.

[Edited to Add: “I believe that the hawk in question is a Red-shouldered Hawk, not a Red-tailed Hawk.” – From a birding reader of this site.]

We saw some smaller birds – possibly Pacific wrens and juncos; and around 5.30 p.m, heard a Great Horned Owl.

The sun reddened the trees along the trail. 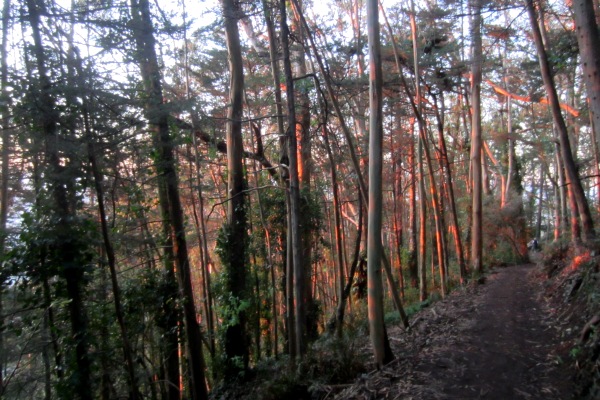 The sun reddened the trees along the trail, and eventually a full moon rose into a sunset sky. 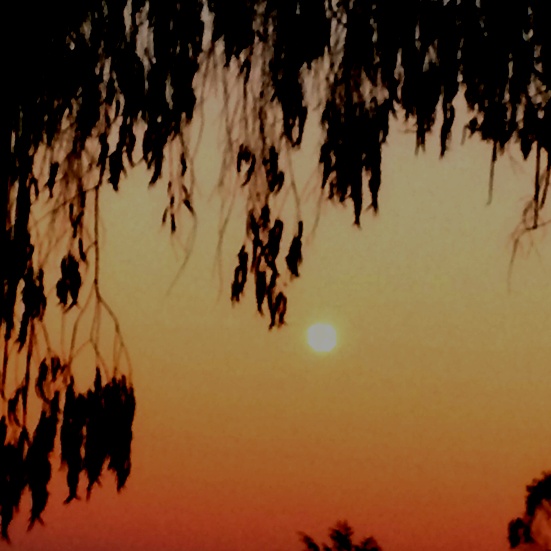 Magical evenings in the forest are reminders that it’s worth the battle to save it.  Thus far, we’ve focused largely on UCSF. But there’s another entity involved –  the Natural Areas Program (NAP) of San Francisco’s Recreation and Parks Department.

It’s a program that focuses on Native Plants. Originally intended to preserve those areas of Native Plants that still existed (for instance, in some parts of Twin Peaks), it’s now destroying existing non-native forests and habitat to replace it with “native” plants. In the process, it cuts down trees. (Most trees are not native to San Francisco, which was windblown scrub before a city was built here). It also uses more of the most hazardous pesticides (Tier I) than any San Francisco Rec and Parks Department except Harding Golf Course.

UCSF is responsible for three-fourths of the forest, but a quarter of it – above Cole Valley and along Clarendon Avenue – is city-owned and falls under the Natural Areas Program (NAP). It’s called the Interior Green Belt. NAP’s plans include cutting down 140 trees, which would effectively remove the tree-cover in the area leaving only a sparse canopy with many openings. They would also remove vines, and pull out the non-native understory plants. 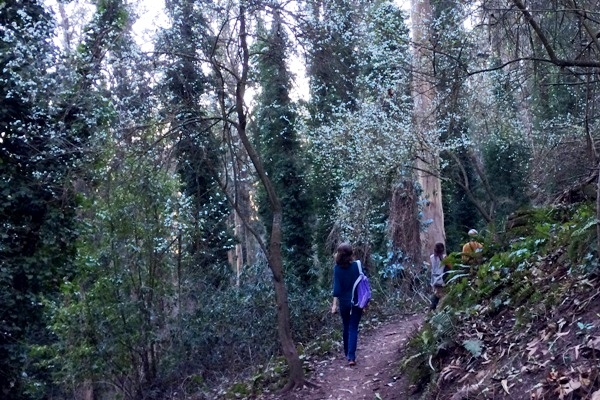 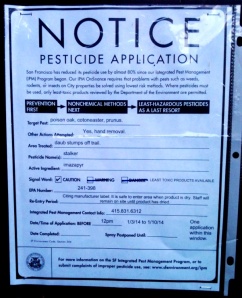 Unlike UCSF, the Natural Areas Program has decided it will use pesticides in the forest. The first notice since 2010 went up in January: Imazapyr, to daub on stumps of poison oak, cotoneaster (a red-berried shrub that birds love) and “prunus” – most likely the plum trees that blossom so prettily.

Imazapyr is a pesticide that moves around, being absorbed by the poisoned stumps and pushed out through the root system into the soil; and it doesn’t disappear. Its breakdown product is neurotoxic.

This is an important and beautiful part of the forest. A lot of the understory has already been stripped out in stages; houses and other structures that were once hidden are now in plain sight, again removing the other-worldly sense of seclusion.

With the reduction in the understory, and the killing of vines leaving dried twining stems instead of leafy ones, the forest has lost much of its mystery. Only a few trails now provide the sense of isolation from the city and other visitors to the forest.

More and more, it’s becoming a see-through forest, and eventually if this continues it will feel at best like a stand of trees rather than a forest. We hope that when the moisture returns to the forest either as rain or as fog, so too will the lush understory that is so valuable for habitat, beauty, and safety.

We also hope the Plans for it can be stopped, and that NAP will stop its pesticide use.

The San Francisco Forest Alliance has a new petition addressed to the Mayor, asking him to preserve trees and access, and stop the use of herbicides in Natural Areas.  Click on the yellow button to get to the petition. If you haven’t already signed, please do.